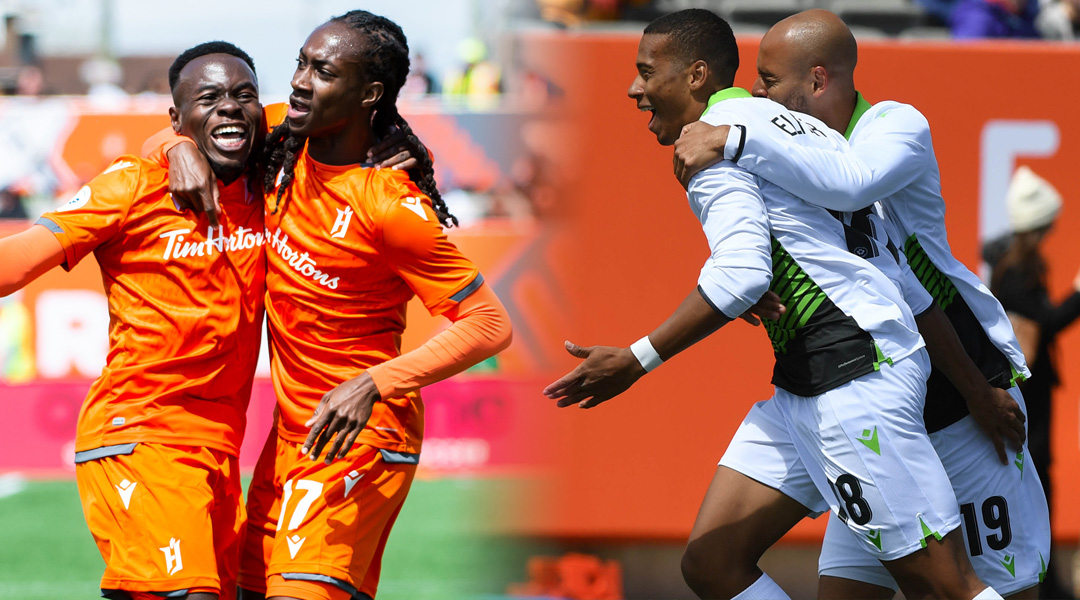 Kicking off in front of an announced attendance of 17,611 at Tim Hortons Field, the inaugural Canadian Premier League game was bound to be an experience of many firsts. Boy, did it ever deliver.

The weather started with a strong wind, with dark clouds overhead threatening to put a damper on the ceremonious occasion. Thankfully, the wet weather held off as referee David Gantar took to the pitch and got the inaugural match between Forge FC and York9 FC underway.

The match got off to an absolutely thrilling start, with York9 Team Captain Manny Aparicio slotting in a through ball to Toronto FC loanee Ryan Telfer, splitting the Forge FC defense right down the middle. A failed attempt to block the through ball meant Telfer had a one-on-one with keeper Triston Henry, and he slotted it to the left corner to give York9 an early lead. The majority of the stadium got quiet, save for a ruckus from the travelling York9 FC support.

However, signs of trouble for York9 FC began to show also immediately: after Emery Welshman almost scored a bicycle kick some 2 minutes later, Forge FC were getting settled on the ball. They began pushing higher up the pitch, with Kyle Bekker’s midfield vision often finding the fast feet of Chris Nanco on the wing. York9 started to sit deeper as Forge FC found themselves dictating the match tempo.

This was bad news for Justin Springer, who was filling in for the injured Roger Thompson. Springer, a CPL U-SPORTS draft pick, was really thrown into the mix of things to mark his professional debut. Nanco would take advantage of this, slotting in several dangerous passes into the York9 FC box, resulting in plenty of narrow misses and a busy day for Luca Gasparotto.

With Welshman squandering another great chance in the 45th minute, York9 FC went into the second half with the 0-1 lead from its only shot on target. Forge FC had taken control of the game, but had yet to find the lethal touch.

The second half got off to a blistering start, with hammer Tristan Borges’ effort striking the crossbar in the 49th. Some 11 minutes later, Forge FC played the ball into open space just a few yards in front of York9 goalkeeper Nathan Ingham, who made a fantastic save with the tip of his toe to keep the lead intact.

Kyle Bekker seemed destined to go down as the first player to collect a yellow, slamming an elbow into the face of Joseph Di Chiara as he went to pick up a ball that went out of play. Di Chiara went down in agony, but Gantar didn’t pull out any cards. After reviewing the highlights, that was probably a mistake.

Manny Aparicio would then become the first Canadian Premier League player to go into the books, picking up a yellow card from David Gantar for a bad tackle on Borges. Bekker, who floated between centre midfield and the left wing, would find himself free but fail to find the target from close range when York9 FC were caught leaving him too much space.

Forge continued to dominate, with several great chances either missing by inches or playing straight into the mitts of Nathan Ingham, who had fantastic positioning throughout the game.

However, even good positioning couldn’t stop what happened next: in the 77th minute, Kadell Thomas (who came on as a substitute for Chris Nanco, and had been terrorizing the wing) collected the ball in the box and curled home a beautiful goal to tie the game. Finally, Forge FC had something to show for its dominant possession. Forge FC had a first of its own.

All-in-all, it was an exciting affair full of flashy footwork, near-misses, and a demonstration that the Canadian Premier League can play football at a decent level. Fans will be hoping the average game ends up being this exciting, and York9 FC will feel like it was a little lucky to take home a point.

Next week, the Nine Stripes will travel to Calgary without Aparicio to take on Cavalry FC. They’ll have a point to prove, especially since Cavalry edged them out twice in preseason. Meanwhile, Forge FC will travel to Halifax to see if they can fish some points from the east coast team.

Fans can tune into all 98 Canadian Premier League games via global streaming provider OneSoccer, which is offering a free month’s trial to any user interested in the service. Today’s game proved to be a great vindication for the platform, with OneSoccer putting out great quality video, plenty of camera angles, and a solid half-time show featuring the likes of Alex Bunbury and Kurt Larson.

Three Key Takeaway Points for Forge FC:
1) The club must finish chances – Welshman, in particular, could have made the difference.
2) Both wings need to threaten – Nanco and Thomas put a lot of pressure on Justin Springer on the right, but Daniel Gogarty was much less challenged on the left.
3) Improve those runs in the box – the hammer got the ball into the box aplenty, but rarely was someone in a position to connect with it.

1) The club must play on the ground – there were too many aimless longballs as the game progressed.
2) The club must find a way to service the forwards – Rollocks and Adjei didn’t have a lot to work with.
3) The club must tighten up its defense – York9 FC were carved open too many times by sharp passes.

Misleading Stat of the Day:
York9 FC exit the match having scored 100% of their shots on target.