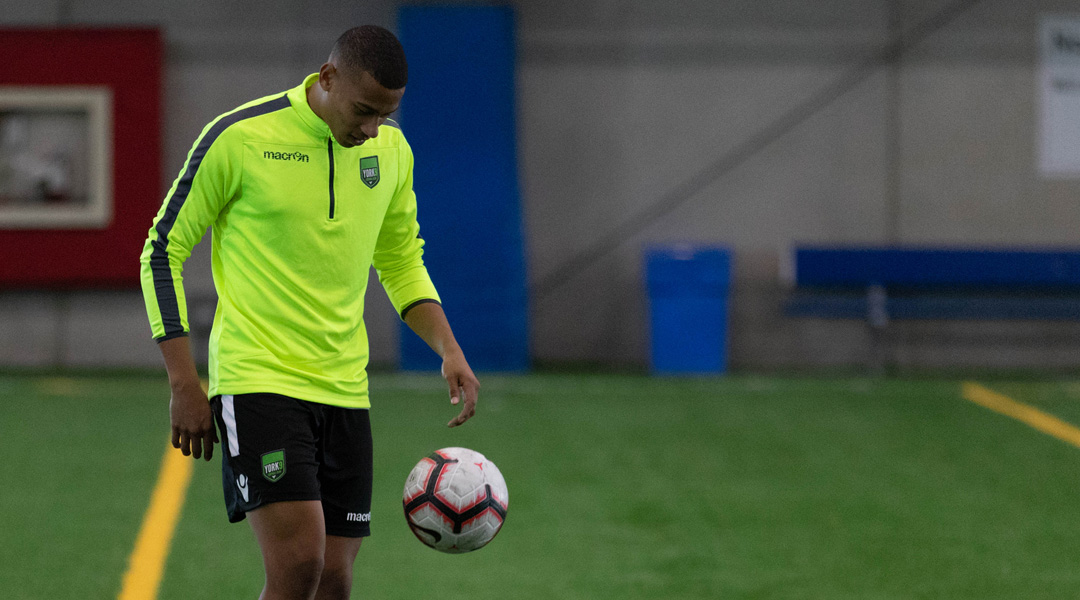 In the sunshine of Punta Cana, Toronto FC loanee Ryan Telfer is focused on his second preseason training camp of the year. It’s not often a player finds himself in this position, and as it turns out, Telfer was given another option that would have made him miss York9’s Dominican-based preseason training camp entirely: a loan move to the Ottawa Fury.

The announcement of his loan from Toronto FC came fairly out of the blue back on March 6, with his TFC squadmates Robert Baskovic, Aidan Daniels, and Shaan Hundal all being loaned to Ottawa Fury of the USL. As it turns out, Telfer was close to being Ottawa-bound as well – but given the option between heading to the Canadian capital or staying in more familiar roots, his former York Lions coach Carmine Isacco helped him opt for the latter.

It wasn’t previously known that Telfer could have been a Fury loanee. Speaking with CPL Associate Editor Armen Bedakian earlier today, Telfer was able to provide some details on what all went down behind the scenes. He knew he’d be loaned out this season, as TFC officials had already informed him that they wanted him to get playing time that they’d be unable to give. At first, it looked like the Mississauga-born Canadian would be on the move to the USL with the other youngsters. Then, York9 coach Carmine Isacco happened:

One of those loan options was Ottawa, and some of the other TFC guys went there as well. Then Carm found out, and he believed it would be a better fit for me to be at York9, stay close to home, and get some meaningful minutes as well. I totally agreed with that. It was a better fit for me. It’s been perfect.

Telfer joins a long list of players who have played under Isacco, who has coached the York Lions soccer team since 2007. He led them to become OUA champions 5 times, win 4 national banners, and collected provincial medals in 10 out of 11 of his years at the helm. Suffice to say, players like Michael Cox, Daniel Gogarty, Colm Vance, Emmanuel Zambazis, and Ryan Telfer are used to winning with Isacco helping the squad. The York9 coach may not be heading things this time around, but it’s clear that Telfer was influenced by Carmine’s presence in the club.

Of course, it isn’t an easy task for players to uproot their lives and perform at a new location. With York9 being in such geographic proximity to Toronto FC, Telfer’s loan isn’t likely to be the last of its kind as the years go by. Of course, that isn’t to say Forge FC won’t ever attract TFC youngsters, and if a Mississauga CPL franchise ever comes to fruition, there’ll be plenty of local competition. York9 have a bit of an edge in that its Vice President and Manager is Jim Brennan, who was both TFC’s first signing and the club’s first Captain. He’s kept a good relationship with TFC brass, and given that his name is on the Wall of Honour at BMO Field, the relationship seems like it will stand the test of time. Here’s what Jim had to say about that relationship:

I have a good relationship with Toronto FC and the people upstairs. It’s the game of football – it’s about creating relationships and working with each other.

Having spent his first month on loan, Telfer seems comfortable with the setup and has been impressed by the professionalism of the burgeoning CPL club.

The one big thing I can compare [between Toronto FC and York9] is the professionalism that I see in training and beyond with the club. I’ve been honestly impressed so far, to see that a new team could have these professional standards that they’re upholding. I’m very pleased. From the first day I came in, I’ve been impressed.

There’ll be plenty of eyes watching Ryan Telfer as he makes his way through a historic loan move for the Canadian Premier League, but it’s off to a promising start. Out of the 4 Toronto FC loan signings announced on March 6, it’s fair to say Telfer’s name carries the biggest clout – and if he’s happy with picking the Canadian Premier League over the USL so far, it’s a great indication for the league as a whole.