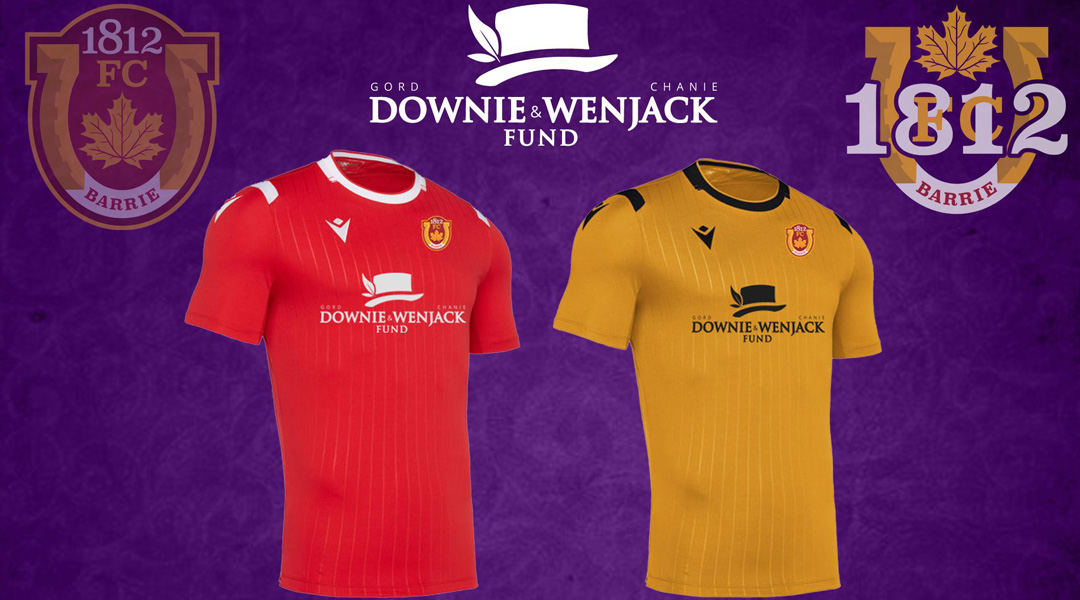 League1 Ontario side 1812 FC Barrie has unveiled that its inaugural home and away kits will feature the Gord Downie & Chanie Wenjack fund.

The red home shirt and gold away kits of the League1 Ontario team will prominently display the fund’s logo, where fans will see the familiar sight of Gord Downie’s feather-tipped hat across the chest.

We are grateful for the support of the 1812 Football Club. We hope the visibility that they are bringing to our organization will help even more Canadians learn about the true history of residential schools and how they can do something.

The club has confirmed that the Macron-manufactured collaboration kits will be available to order the online in the upcoming days.

1812 FC will be sporting the kits for the club’s home opener on Saturday, August 14, though recent difficulties with the club’s planned home ground have forced the side to play from Brampton for its first-ever season.

The expansion team had originally planned to utilize the the field located at Georgian College in Barrie, though COVID-19 restrictions led the field owners to postpone any third party usage. When a temporary move to Innisfil fell through, the Barrie-based side was then forced to relocate to Brampton – meaning a true homecoming take place until the club’s second year.

The Gord Downie & Chanie Wenjack Fund is inspired by both Chanie’s tragic story and Gord’s devoted call to build a better Canada, with the fund aiming to build cultural understanding and create a path toward reconciliation between Indigenous and non-Indigenous peoples.

1812 FC listed some current initiatives that the fund is involved with, including Legacy Schools, Artist Ambassador, Youth Ambassador, and Legacy Space programs.

Tragically Hip front man Gord Downie – a beloved Canadian icon – passed away in 2017 following a battle with cancer that included an emotional farewell tour. Chanie Wenjack was an Anishinaabe child who passed away from starvation and exposure at the age of 12 while attempting to escape from the Cecilia Jeffrey Indian Residential School in 1966.

In raising awareness for such an important cause, 1812 FC appears to have forgoed potential kit sponsor revenue in exchange for aiding a domestic charity amid a year where the Every Child Matters movement has become a household name, highlighting a dark and ongoing chapter of Canadian history.

The club has confirmed that a portion of proceeds from kit sales will go towards the fund.

1812 FC Barrie started its season with a 0-3 away loss to the Vaughan Azzurri, where former Forge FC goalkeeper Quillan Roberts impressed with several big stops throughout the first half.