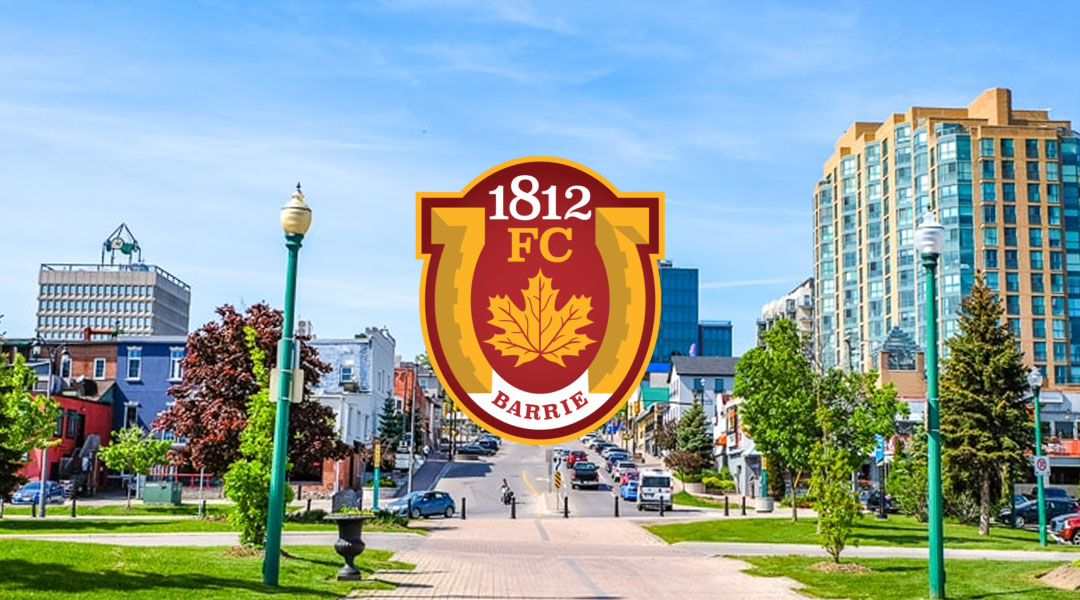 Three days ago, Peter Raco took to Twitter to post a significant announcement regarding the future of soccer in Barrie: 1812 FC was coming to town. The professional club is due to be further unveiled this Thursday, June 18, with the side partnering with the Barrie Soccer Club in order to launch a League1 Ontario men and women’s side in 2021.

In the middle of a pandemic, the announcement of a new professional football club is a lot to take in. As it turns out, without the pandemic there may not have been an 1812 FC at all.

Things got started when local Barrie soccer fan Ronan Cordelle began campaigning to bring a professional soccer club to Barrie in late 2019, with the grassroots movement picking up steam via a petition that featured support from the likes of Danny Dichio and Niall Quinn, with Cordelle also organizing meetings with the mayor and local politicians to discuss the city’s potential for professional soccer.

Cordelle even went a step further, taking to LinkedIn to find entrepreneurs in the football world who may be able to offer him advice on how such an endeavor could feasibly take place. It was there that he happened to message Andrew Weilgus, the owner of New Jersey-based National Premier Soccer League side Atlantic City FC.


By chance, Weilgus was familiar with the Barrie area: his cousin had married a doctor who works at Brampton Civic Hospital, so for the last thirty years he’d been visiting Ontario two-to-three times a year and had gotten pretty familiar with the GTA and its surroundings. When Ronan messaged him, he happened to be heading to Toronto from New Jersey in the near future, so the two arranged a meet.

Weilgus was impressed with Ronan’s enthusiasm, though he wasn’t in a position to help in a hands-on manner: by this point in time, Atlantic City FC had completed its second-ever season after being founded in 2017. The expansion side missed playoffs by four points in its inaugural campaign, then won its conference the next, qualifying for the US Open Cup. This led to some roster requirements that left Weilgus with a lot to focus on.

We sat down for breakfast and he told me all about Barrie and the plans he had, and what he thought it could be for the community, but he didn’t really have a cohesive plan as to how to make any of that happen. He was looking for guidance or information for how to actually do this. I said to him that I was happy to advise, give him guidance, and try to introduce him to some people, but I’m overwhelmed right now with what I was doing with Atlantic City FC. When I met with him in January, we just found out we were a US Open Cup team, and then we also found out we could not field a single player from college, so we had to rebuild our roster from scratch because none of our college players that had signed for us were eligible, because the tournament was starting in March this year and they were not allowing college players to participate for the first time ever.

After meeting with Ronan, Weilgus returned to New Jersey to prepare the new roster for the tournament, with James Galanis – Carli Lloyd’s trainer and assistant coach at Atlantic City FC – preparing the squad for the US Open Cup. It was at that point in time that the coronavirus pandemic picked up significant momentum, forcing soccer activities to stop. The entire Atlantic City FC squad could no longer stay at their regular digs in the Tropicana Hotel and Resort, so Weilgus sent them home. His investments outside of football were all shuttered too, given that they were rooted in the bar and restaurant industry.

It was bad for Weilgus, but good for Barrie.

I called Ronan up and said ‘hey man, this is a weird thing: it’s terrible what’s going on, but for the first time in as long as I can remember, I have time on my hands’. All my businesses are shut down. Every bar in the country is shut down. My team is dispersed. I have nothing to plan for. Let’s get this together and figure out if this is a doable thing, to get 1812 FC launched. He was game. I said I would clear everything that I was doing and try to put 100% of my energy and effort into building a team that can make this happen, and put it together.

With renewed focus on the project, Weilgus approach Peter Raco, a football advisor and player agent who works with the likes of Juan Cordova and holds an advisory role with a handful of clubs.

I spoke with him, and really he and I just had such a great rapport and such a great ability to talk about the game, the future of Canadian soccer, and the landscape. We’re both very much in a single mindset regarding the immense potential of Canadian soccer over the next thirty years, maybe even moreso than the US, which I obviously feel is a very up-and-coming country comparatively speaking to its history in terms of its potential for soccer.

The duo set to work establishing what made sense for Barrie: Weilgus handled the branding, marketing, and development of the side, while Raco worked on outreach to League1 Ontario and establishing what needed to happen to make sure the club was eligible. League1 Ontario isn’t taking applications for the 2021 season yet, but Weilgus and Raco are confident the club will meet league requirements.

Once we had that established, we knew exactly what everyone’s role would be and we were confident that we had something that is going to hit. We decided that even though the timing is strange because of COVID and everything else, people need stuff to look forward to. They need to feel good about things that are growing and being planned in the future, and I felt what better opportunity to get this out there to the public and let our intentions be known.

With that, Raco took to Twitter to announce the imminent arrival of 1812 FC. The club will be holding a full unveiling this Thursday, June 18, 2020 – a nod to the calendar day in which the War of 1812 broke out. Weilgus states that the moniker of the club isn’t there to glorify war, but rather to honour the foundations of the city itself. There’ll be more on that soon.


Raco and Weilgus both have high ambitions for 1812 FC, believing that the club can elevate the level of play seen in League1 Ontario and, potentially, beyond. While fans will need to wait a few days to find out more about the side and what professional club means in this context (and wait even longer to seem them play), the duo were eager to begin the process of communicating with fans, building relationships with sponsors, and getting feedback ahead of their potential League1 Ontario launch in 2021.

I think there’s a good that can come from making our intentions public in terms of generating community interest, generating player interest, and really creating a buzz with the Barrie soccer youth and the Barrie Soccer Club, and also building that community.

While whatever happens with the ambitious endeavor remains to be seen, there’s a lot of interesting movement behind 1812 FC, with all of it taking place because a local fan happened to message someone in New Jersey with unexpected ties to the province, with a pandemic then giving him the time to help.

Northern Tribune will have a more detailed piece on the potential League1 Ontario expansion club later on today.