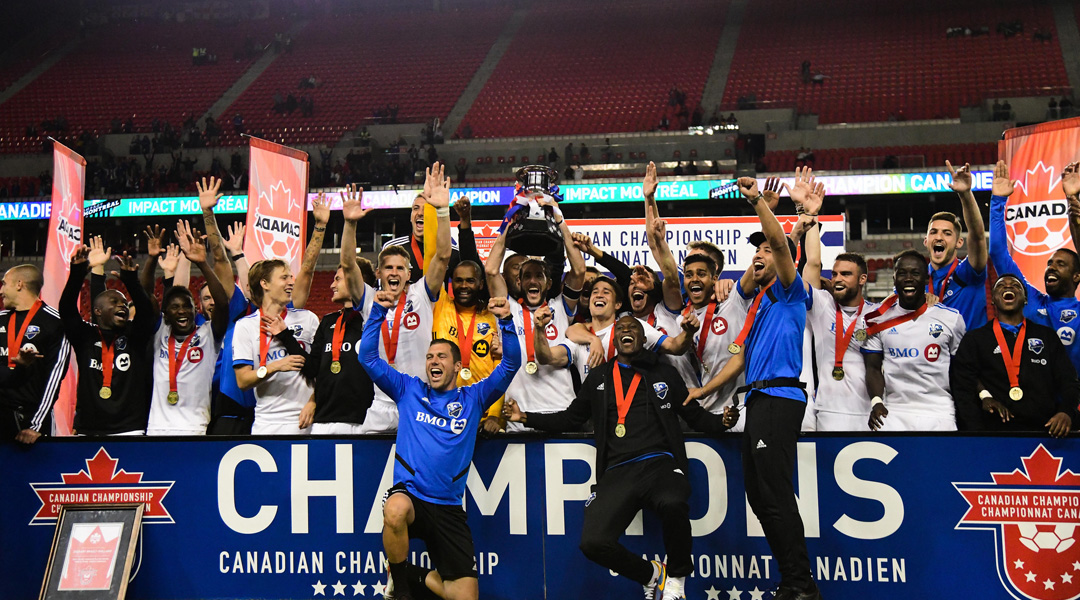 If any team was going to snap Toronto FC’s three-year winning streak in the Voyageurs Cup, one feels like it had to be Montreal.

After taking the home leg 1-0 last week, the Impact knew it stood a good chance of leaving some 21,365 fans at BMO Field frustrated. While the first half went exactly to plan, a scramble in front of the net in the 70th minute saw Tsubasa Endoh etch the ball over the line to restore parity between the teams: Toronto FC, it seemed, was making yet another historic comeback against their fierce rivals.

It wasn’t meant to be: a Chris Mavinga red card in 84th minute set the reds on the backfoot, with eventual Voyageurs Cup golden boot winner Ignacio Piatti blasting a shot off of the crossbar in injury time. The Voyageurs Cup doesn’t feature extra time, so with the scores locked after 90 minutes, both teams went straight to penalties.


Montreal only had to make three shots from Krkic, Lovitz and Camacho, with all of them going in. Toronto FC, conversely, saw its rough penalty shootout history continue with Altidore hitting the crossbar, Mullins seeing his shot saved, and a Jonathan Osorio post-and-out effort handing Montreal it’s first Canadian Championship since 2014.

For Montreal Impact head coach Wilmer Cabrera, the win means he’s now collected back-to-back domestic cups: he led the Houston Dynamo to a US Open Cup in 2018, while helping the Impact best Toronto in the Canadian Championship finals – though he wasn’t the head coach through their entire journey, something which he reflected on in the post-game interview:

They deserve to win this for the fans, for the city of Montreal, and obviously for the club that’s made every effort to put all of this together. I also have to share this trophy with Rémi Garde and Nick De Santis, who are not here today but who have worked hard all season. This game was played in two halves. The first one Toronto dominated, but we came out stronger in the second, with a better mentality, and we decided to go after them. When we did that, we showed we could hurt them. Despite conceding, we continued creating good options in attack and we finished the game stronger than them. I am proud of the players, because we showed why we deserved to win this trophy.

Montreal’s fourth-ever Voyageurs Cup win (or tenth, if you take into account the pre-2007 USL era) will see them participate in the 2020 Scotiabank Champions League. When they last participated in the tournament, they made it all the way to the finals – something Toronto FC did as well in 2018, before losing out on penalties there, too.

Montreal’s road to the 2019 Voyageurs Cup wasn’t easy: the club faced tough competition against Canadian Premier League sides York9 FC and Cavalry FC, with the former nearly taking a win at York Lions Stadium and the latter providing giving itself a chance with a crucial away goal.


Having helped the squad through those tough matches, Impact midfielder and Canadian international Samuel Piette finished the cup tournament with a high opinion of the Canadian Premier League. With the tournament now expanded to thirteen teams, it’s truly a coast-to-coast Canadian competition, making the 24-year-old midfielder all the more proud to bring the trophy back to Quebec:

It’s a more serious competition than just playing two, three games and then you’re in the final. Now we have more clubs in Canada, and we want to be back on the soccer map, and with a serious competition like this one, it proves that soccer has grown here. Now, to go into Championship League to represent Montreal, Quebec, and Canada as well, it’s really special.

The Montreal Impact will see out it’s Major League Soccer season with two tough home matches against Atlanta United and the New York Red Bulls. The club finds itself on the outside looking in when it comes to playoffs, and will need to collect all six points if it is to have a chance of joining in on the post-season.