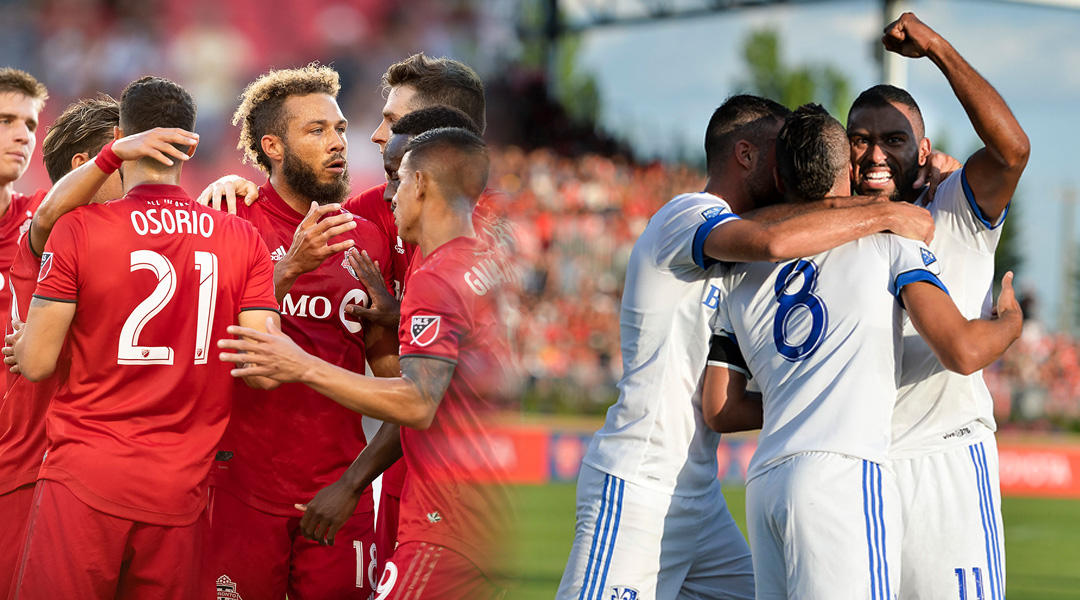 The two Major League Soccer clubs remaining in the 2019 edition of the Canadian Championship went into the second leg of the semi-finals with goal advantages, but nothing is ever over until 90 minutes of the second leg come to a pass.

Unlike the quarter-finals, the semi-finals would see both Major League Soccer clubs retain control over their opposition, with Toronto FC and Montreal Impact advancing on to what will be a hotly-contested final. 2019 has been the most expanded form of the Voyageurs Cup yet, with seven Canadian Premier League teams competing alongside a USL club, a PLSQ club, a League1 Ontario club, and three MLS clubs.

Here’s a breakdown of what took place last night:

The Reds had brought in a heavily rotated roster to Canada’s capital, but still came out of the first leg with a two goal advantage. The second leg would see Toronto FC remain firmly in control, with former DC United midfielder Nick DeLeon putting any thoughts of a comeback to rest with a nicely-placed shot in the 14th minute that eased just beyond Fury goalkeeper Callum Irving.

Patrick Mullins, who arrived to Toronto FC from Columbus Crew in a trade deal that saw Jordan Hamilton go the other way, would find himself hitting the crossbar in the 36th minute. He’d finish the job less than a minute later after Nick DeLeon slotted a low ball in that found Mullins completely unmarked, allowing him to tap the ball in from two feet out.


DeLeon, who signed a contract extension earlier this year, would then twist-and-turn through the midfield two minutes later to fire off a shot from 25 yards out. His placement was spot on once again, with the ball travelling just out of Irving’s reach to give Toronto FC a healthy 3-0 lead at home, and a 5-0 lead on aggregate.

TFC goalkeeper Alex Bono was called into action on a few occasions, stopping a one-on-one in the first half and later on preventing any thoughts of a comeback in the second. The match wouldn’t see any more goals come to fruition, and although it’s far from the result that Ottawa Fury head coach Nikola Popovic would have wanted, he still found some positives from the performance overall:

I think we have to be proud of our players. We knew coming into this match that we had to score goals, so we took some risks. We were controlling the game the first fifteen minutes until one bad pass in the middle led to the goal and the control of the match. However, coming here, against a top 5 possession team in MLS, and be able to go 50/50 with them [in ball possession] at the end of 90 minutes, and managing 11 shots, I think for the difference of the levels that exist between the two clubs, Fury FC had a good performance

A sellout crowd at Spruce Meadows is indicative of the belief the local Calgary scene has in its club: Montreal Impact had taken the first leg 2-1, but Tommy Wheeldon Jr.’s side often found a way to etch out results. It’s what won the side the spring season, and some 5,633 spectators cheered them on as they sought to dispatch a second MLS team after the Vancouver Whitecaps.

With Sergio Camargo having earned the club an away goal in the first leg, Cavalry FC came out unafraid to push players forward in an effort to get a crucial goal at home. Much like Toronto FC did to Ottawa, however, the Major League Soccer side scored an early goal: Anthony Jackson-Hamel rose well to get his head on a corner kick, and it flew in with some pace beyond Marco Carducci.


Undeterred by the setback, Cavalry FC still threatened after conceding the goal, with Dominick Zator getting his head on a set piece and forcing Diop into a stretching save. Nico Pasquotti found himself through on the wing with ample space, running himself to the line and driving in a low cross that would go just beyond the three or four Cavalry FC players who had made bursting runs into the box.

Montreal Impact goalkeeper Clement Diop, who took over the Voyageurs Cup starting spot from James Pantemis for the match, kept things calm and collected in the back to help Montreal Impact sustain the pressure. The Major League Soccer side would see out the result, securing a 3-1 aggregate victory over the last Canadian Premier League club in the competition.

Montreal Impact player Samuel Piette had said the quality of the CPL was very high after playing York9 FC, and it seems like Impact head coach Remi Garde agrees with the assessment:

They were two difficult games for us, but they were two good games. It was very important for us to score an away goal. I want to congratulate my team. Today, we fought as a team. We fought for every ball. We knew it would be that kind of game. If we can repeat this kind of spirit every game, we would be a much stronger team.


The two-legged Voyageurs Cup final will take place on September 18 and September 25 respectively, with the winner qualifying for the CONCACAF Champions League. Cavalry FC did well to make it to the semi-finals in the club’s first-ever foray into Voyageurs Cup action, dispatching Pacific FC, Forge FC, and the Vancouver Whitecaps along the way. Montreal has now dispatched both York9 FC and Cavalry FC on its way to the finals.

The road to continental cup qualification isn’t over for Tommy Wheeldon Jr.’s side, which can still qualify for the CONCACAF League if it wins the Canadian Premier League. The club already has one foot in the door in that regard, as it won the spring season and booked itself a spot in the two-legged Canadian Premier League Championship.

Still, like we said about the second leg of the semi-finals, nothing is ever finished until the final whistle: there’s still work to do.