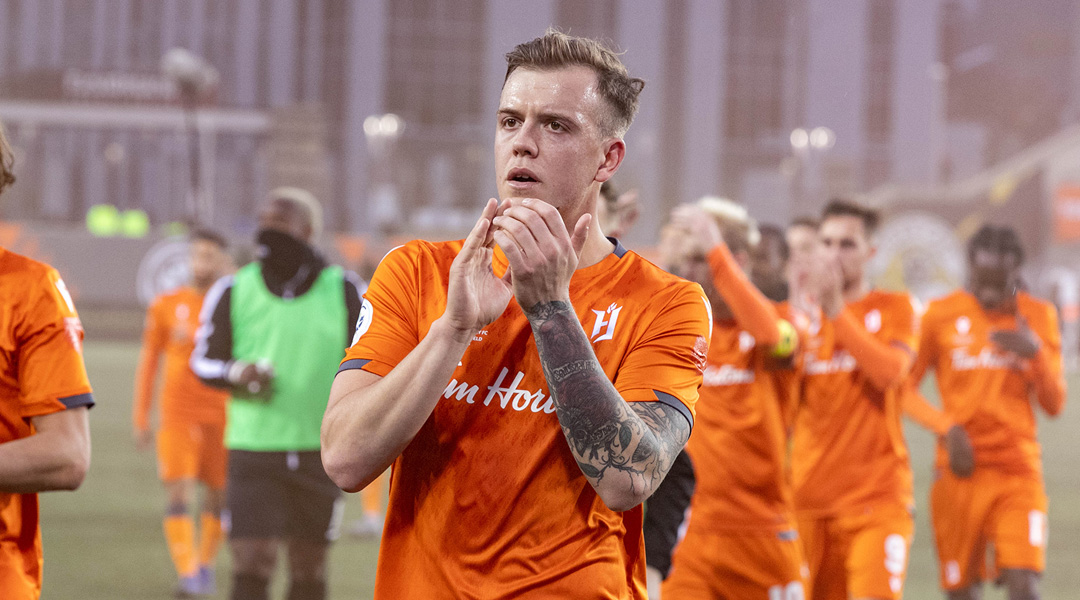 The first leg of the Canadian Premier League finals was one for the history books: home side Forge FC fought its way to a 1-0 victory over Cavalry FC, though the scoreline fails to show the scale of drama that took place at Tim Hortons Field tonight.

Across ninety-odd minutes of action, the match between the two top CPL clubs featured two red cards, several crossbar strikes, and a stellar matchday atmosphere brought on by over 10,000 fans in attendance.

The first half started off with both sides exchanging chances in a back-and-forth manner, with Forge FC captain Kyle Bekker striking the crossbar with a long-range effort in the 34th minute. However, the match was turned on its head ijust three minutes later: Borges had possession in the Cavalry FC box when a defensive slide from Cavalry defender Joel Waterman resulted in both an in-the-box handball call and, harshly, marching orders for Waterman.

Marco Carducci – who was called up to the Canadian national team for his performances throughout the season – stepped up once more and made a foot-based save against Borges’ subsequent penalty, though the spring and fall season winners now had to see out the rest of the game down a man in hostile territory. A few minutes later, a Daniel Krutzen freekick saw the crossbar rattle for a second time, signalling rampant danger for the Calgary-based side.


Whatever half-time chat Cavalry FC head coach Tommy Wheeldon Jr. had, the one minute of added time was all Forge FC needed to change that talk entirely: A brilliant move by Chris Nanco on the wing allowed him to play the ball in to Borges, who wasted no time rifling in a curled effort beyond Carducci for his 13th goal of the season. Tim Hortons Field exploded in a cacophony of noise as the league’s top goalscorer simultaneously gave the men in orange the lead, and earned himself a two goal cushion ahead of Cavalry’s Dominique Malonga in the golden boot race.

The second half would see Forge FC piling on the pressure to take advantage of Cavalry FC being down a man, coming close to scoring on several occasions. In the 69th minute, Tristan Borges went in for a challenge against Cavalry FC defender Jay Wheeldon, with the ensuing on-pitch ‘disagreement’ between the two leading to a straight red card for Borges. Both teams were now down to ten men, with the league’s top goalscorer now officially suspended for the second leg.


For Cavalry FC, the match wasn’t meant to be: the home side saw out its 1-0 win in a match that was filled with drama, near-misses, and many fantastic saves from Carducci to keep his side’s goal deficit minimal. The second leg will take place next week on November 2 at ATCO Field. The game will be streamed live on OneSoccer, with CBC Sports airing the second leg through a tape delay.

It’s no surprise that both sides saw red tonight given that the two clubs represent the league’s best naturally-developed rivalry. After winning both the spring and the fall season, it could be all for naught for Cavalry FC – so fans can likely expect an attacking, high-pressing mentality from Tommy’s men when the second leg plays out in Calgary next week.

We kind of clung on here, but we also know that when we come here, it’s a very difficult place to play. We never seem to be at our best when we play here. But we know that we’re very good at home, so it does feel good. It feels like we got out of here only one down, and now we’re going home with a big chance.

The winner of the two-legged matchup will become the first-ever Canadian Premier League champion, and will hoist the recently-unveiled North Star Shield as a result. Beyond going down in history, they’ll also qualify for the 2020 CONCACAF League as a result of collecting the league title, and will also wear a special badge for the 2020 season.