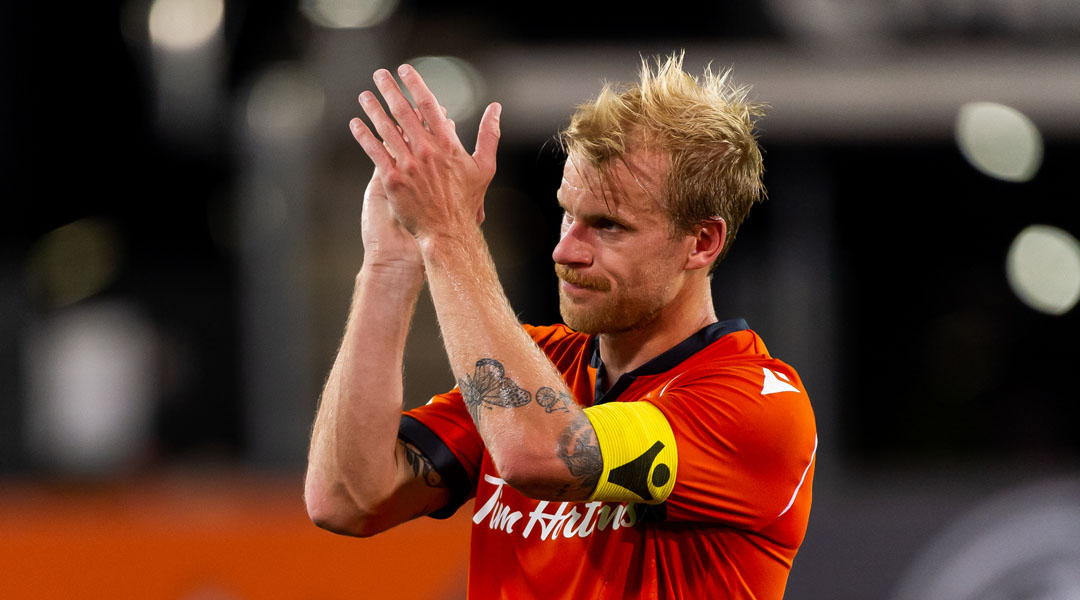 The much belated 2020 Canadian Championship Final will take place later today, with Forge set to host the first ever CPL-vs-MLS Cup Final in front of a home crowd at Tim Hortons Field. We spoke with Forge FC Captain Kyle Bekker, who got his professional start with Toronto FC and made 59 MLS appearances overall, about the opportunity to land Forge FC another forever-first against his former club.

“It’s not so much about the opponent we’ve facing as just having a cup final,” said Bekker. “Being able to host that in front of our fans at Tim Hortons Field, that’s special. Hamilton is special. These kind of games are hard to come by in a career, so we want to make sure that with this group we don’t let this opportunity pass us by without going out and showcasing what we’re all about.”

Bekker has been a real talisman since joining Forge FC in 2019 and donning the captain’s armband: the Oakville-born midfielder has contributed fourteen goals through a club record 95 appearances, hoisting the North Star Shield twice and personifying the hard-working, get-it-done culture of Hamilton. Despite having played for Canadian MLS sides Toronto FC and CF Montreal, however, a Canadian Championship win has eluded him.

Now leading a team in a league that is just four years old and has already repeatedly punched above its weight, Bekker points to Forge’s track record of proving themselves on the big stage as motivation for tonight: they’ve shown to be up for these kind of matches in the past, whether that’s forcing CF Montreal to eleven rounds of penalties or securing a hefty home comeback against Santos to qualify for the Champions League.

“These are big moments whether you’re just starting your career or whether you’re towards the end of it, these are the special games you always dreamed about as a kid. They’re the ones you’re going to remember forever. Forge FC, we want to be in these games, we want to be constantly pushing the envelope for Canadian teams, for clubs in the CPL. We know that we have a responsibility to go out there and showcase our best efforts.”

The hammers first qualified for the 2020 Canadian Championship Final by virtue of winning The Island Games back in 2020, with a shortened season seeing Forge FC hoist the shield after a 2-0 win over the Halifax Wanderers. Toronto FC, meanwhile, secured passage by having the best head-to-head form against the other two Canadian MLS sides during a domestic-only playing stint due to the pandemic.

That means the match has held a tentative spot on the calendar for over two years. Bekker says it’ll feel good to scratch it off, though he says the added wait hasn’t caused any over-thinking.

“It was something that was sort of out of sight and out of mind. It was so far out of anyone’s control, it got pushed back and it was what it was. Both clubs were dealing with a lot at that time, whether it was Concacaf or whatever it may be. The fact that we have the opportunity to play another final and be able to host it is a massive opportunity.”

Given that CF Montreal is technically the current holder of the cup, Bekker laughs when asked if Forge will be able to hold onto the cup itself should they win. He doesn’t know – but he says it’d be nice to be able to enjoy it for a time.

The 31-year-old midfielder is far from the only former Toronto FC talent who will be suiting up in orange tonight, with players like Ashtone Morgan, Emery Welshman, and several former academy talents now the opposite battle line of the MLS side.

Kwasi Poku is one youngster who jumped from Toronto FC II to Forge FC in a bid for first team minutes, and he was immediately thrust into the Champions League for two matches against Cruz Azul. The 19-year-old is being converted to a full-back position, and he’s keeping his cool about playing his former team: it’s another day at the office for him, he says, though he’s keen to help Hamilton bag some silverware.

“I feel like we have a really good shot at this,” said Poku. “Being Forge, we have a winning culture. We expect to win, we want to win, and we’re going into every match with that expectation. We’re going into this competition the same way.”

Training alongside proven professional with MLS experience has been a big boost to him, he says, even describing his left-back competition with Ashtone Morgan as more of a brotherhood than anything else. His move to Forge has put him in situations that he wouldn’t have been n otherwise, and he’s happy with the early payoff at this stage of his career.

Bekker has seen the Canadian football landscape change aplenty during his time on the pitch, especially now that the Canadian Premier League is giving opportunities to plenty of young domestic athletes like Kwasi. He’s always believed in the talent pool across the country, stating that players just needed the stage and opportunity to play week-in and week-out, expressing themselves to the masses.

“You see the league constantly growing year over year, which it has done since the first year in 2019. There have been some monumental results. I think we’ve been we’ve been a part of a lot of them, but other teams have had massive wins over other MLS teams in this competition. So I think it just goes to show the the wealth of talent that we have here in Canada,” he adds.

No matter the talent on the Forge FC roster, they will enter the cup final as underdogs against a Toronto FC squad with the likes of Alejandro Pozuelo, Michael Bradley, and Jesus Jimenez on the books – and relatively fresh off a CPL-vs-MLS win themselves. Still, Toronto FC hasn’t been having a season for the ages, resting in twelfth out of fourteen in the eastern conference, and that can inspire confidence for the hosts.

That being said, Forge has also found itself off to a slow start in terms of league form, though much like TFC they’ve begun to pick up some results and recently rose up to the top half of the table.

“It’s a marathon, not a sprint,” said Bekker on the subject. “We knew that coming in. Historically, we haven’t always been the best starters to a season, but it is what it is. I think we’ve had the correct attitude, and it’s nice to see we’re starting to head in that direction. The guys are continually buying in, they’re showing up and working hard and putting their best foot forward. I think that’s going to be the sign that turns all this around for us, and we’ve seen that recently. Hopefully, we can keep that going.”

The club will be buoyed by the fact that they earned hosting rights to the cup final through a convoluted, pandemic-impacted process in 2020 that saw Toronto FC earn the Champions League berth typically handed out to the winner. With Forge unable to train due to health restrictions at the time, it was a trade-off that now sees the club set to enjoy what sounds like a sizable home crowd.

“There’s no denying it, we love playing at home,” says Bekker, “we love this field, we love the fans, and we love the confidence that we get from being there. That comes with going and having success and having those moments that you can look back on and build for future games. We need to use that blueprint and lean on that for the cup final. We can use it to our advantage and get on the ball to play the way we can, and showcase our brand of football, really believe in it.”

Bekker is big on this this belief: he wants the youngsters of the squad to know that they’ve been placed on this stage for a reason. A cup final can come down to particular moments, he says, and they need to believe in themselves when it comes time to make split-second decisions.

“It’s 90 minutes. It’s a final, and anything can happen – but you’ve got to believe that you’re capable of doing something special. We’ve played big matches at home and had success there,” he concludes, “and we just need to be able to believe in that.”

It’s a sentiment echoed by the left-back protege Kwasi Poku.

“The belief is everything: at the end of the day, the ball is round, and anybody can win.”

Sunderland Set For Trip Through Maritimes