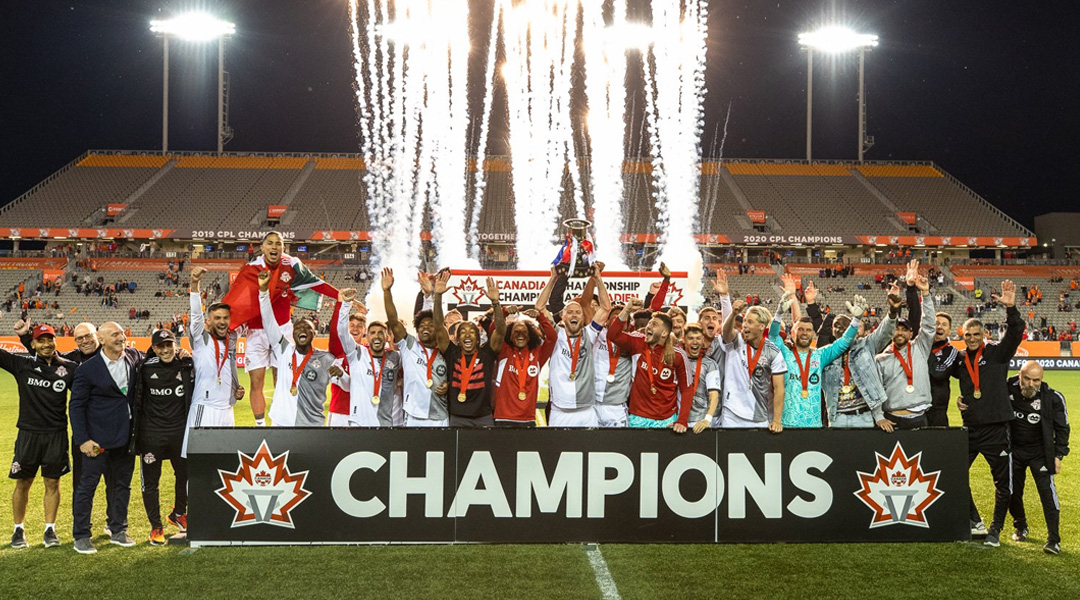 The 2020 Canadian Championship Final went the distance on Saturday night as Toronto FC managed to hold their nerve and get past Forge FC in Hamilton. The match lived up to its billing with both teams selecting strong lineups and having had their chances throughout the 90 minutes.

It was Forge who started the game the best, with the Hammers carving out several chances in the opening quarter of the game. Unfortunately for them Quentin Westberg was equal to everything that came his way.

In the 20th minute, Forge found themselves with a penalty opportunity as Choiniere got behind the TFC defense and was pulled down by Petrasso. The ensuing penalty from Borges smashed off the crossbar and stayed out, keeping the score at 0-0.

Being let off the hook by Borges’ spot kick failure, Toronto woke up and started to test Henry and the Forge backline. The best chance for the guests in the opening stanza came off a free kick where former Pacific defender Lukas MacNaughton had his header saved by Henry.

Bob Bradley made a change at half time for the visitors, bringing on Shaffelburg for Nelson. According to Bradley, this change was done with the hope of adding some more pace on the left flank.

The start of the second half saw both teams exchange efforts to no avail. On the stroke of the hour mark, however, Toronto FC took the lead: after a small scramble in the Forge box, Alejandro Pozuelo got his foot on the ball with the number 10 dribbling close to the D before sending a curling left-footed effort into the top corner giving Henry no chance.

The lead did not last long for the Reds, as Forge immediately equalized within three minutes. After a pinpoint cross to Borges, the winger made amends for his penalty miss by taking control of the pass and firing a shot past Westberg.

After the two goals both teams had their moments to take the game but just could not finish their chances. The 90 minutes did have its fair share of cagey moments, as referee David Barrie brandished nine yellow cards, five to Forge and four to Toronto FC.

As a result, penalties were required as it ended 1-1 after 90 minutes. TFC shot first at the Barton St. Battalion end of the stadium. The first two rounds saw all penalties find the back of the net. Neither Westberg nor Henry were close to saving any of the penalties in those rounds.
It was Deandre Kerr who missed the target in the third round, with Pacius converting his to give Forge upper hand. The very next round, however, saw the Hammers surrender the advantage. After Pozuelo snuck his penalty in, Forge skipper Kyle Bekker shot his at Westberg, who made the simple save.

After both teams scored their fifth round shots, sudden death was needed to determine a winner. Kosi Thompson put his penalty away, putting the pressure on Forge’s Kwasi Poku. Unfortunately for the substitute, his effort hit the bar, bounced on the line and came out, ending the match there.

The victory for Toronto FC gave them their eighth Voyagers Cup and their first since 2018. Speaking in the press conference afterwards, Reds’ coach Bob Bradley praised his team for being able to rally after giving away their lead so quickly. While the gaffer was not impressed with his side’s start to the game, he said that will be something they will have to work on.

Bradley’s opposite number Bobby Smyrniotis credited his side for their performance. When asked about what he will say to encourage his team for he rest of the season, Smyrniotis simply said to play like they did that night, believing the showing will give Forge confidence for the upcoming CPL games.

Forge will not have much time to mull over the defeat, welcoming Pacific back to Hamilton next Sunday for the first time since losing to the Tridents last December in the CPL Final.

As for Toronto FC, they will host CF Montreal in the semifinals of this year’s Canadian Championship on June 22. It is a repeat of the 2021 final, with CFM taking the win there. Before that they will go to New York Red Bulls in an MLS tie in two weeks’ time.