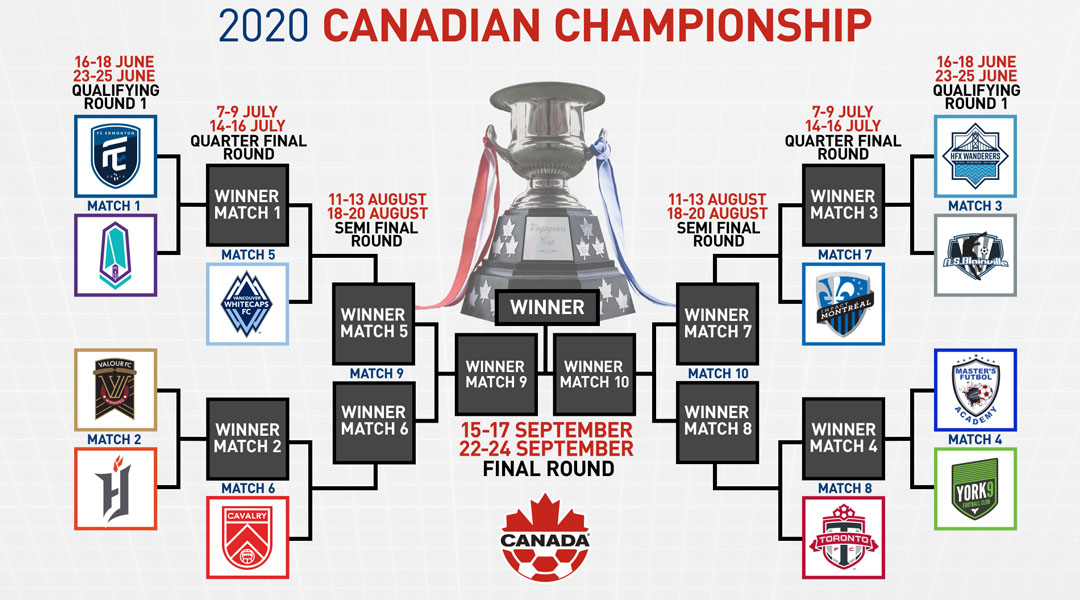 Canada Soccer has just announced the schedule for the 2020 Canadian Championship, and it features a highly requested change to the format.

The folding of the Ottawa Fury means that the Canadian Championship will feature twelve teams next year, with the domestic cup tournament retaining its two-legged bouts for each round. This time around, the reigning champion no longer gets a bye to the semi-finals.


The first qualifying round will now begin a month later in the year, taking place between June 16 – June 25, 2019. The opening round of action will feature six Canadian Premier League sides and two semi-professional clubs from League1 Ontario and PLSQ respectively.

Both York9 FC and the Halifax Wanderers were selected to square off against the semi-professional opposition last year, too. Both of the underdogs put up a good fight.

The second round and beyond are where the potential rivalry matchups really have potential. Cleverly, Canada Soccer did a good job of dividing the brackets (for the most part) into east and west, reducing the travel costs associated for each club as the tournament progresses.

Cavalry FC gets a bye to the quarter finals along with Major League Soccer sides Toronto FC, Vancouver Whitecaps, and the Montreal Impact. It appears Cavalry got the bye due to being the last CPL team standing in the tournament last year, though it’s certainly questionable why the reigning CPL champion didn’t get the bye instead.


With the Canadian Premier League edging closer to expansion in 2021, the shape of the tournament may shift yet again in the near future. To that end, Cavalry FC head coach Tommy Wheeldon Jr. hopes that the Canadian Championship will expand to include more semi-professional and even amateur sides, while the proposed League1 BC semi-professional league could also lead way to the tournament’s expansion in the near future.

2019 saw the most expanded version of the tournament so far, with CPL sides like York9 FC and Cavalry FC providing some tough tests for their respective MLS opposition. An all-MLS final saw the Montreal Impact break Toronto FC’s win streak and qualify for the CONCACAF Champions League.

Toronto FC Captain Michael Bradley revealed that several of his squadmates had hoped for a trip to Halifax this year. Today’s schedule reveals that the Wanderers will need to best two Quebec-based opponents – AS Blainville and then the Thierry Henry-led reigning champions – in order to make that happen.