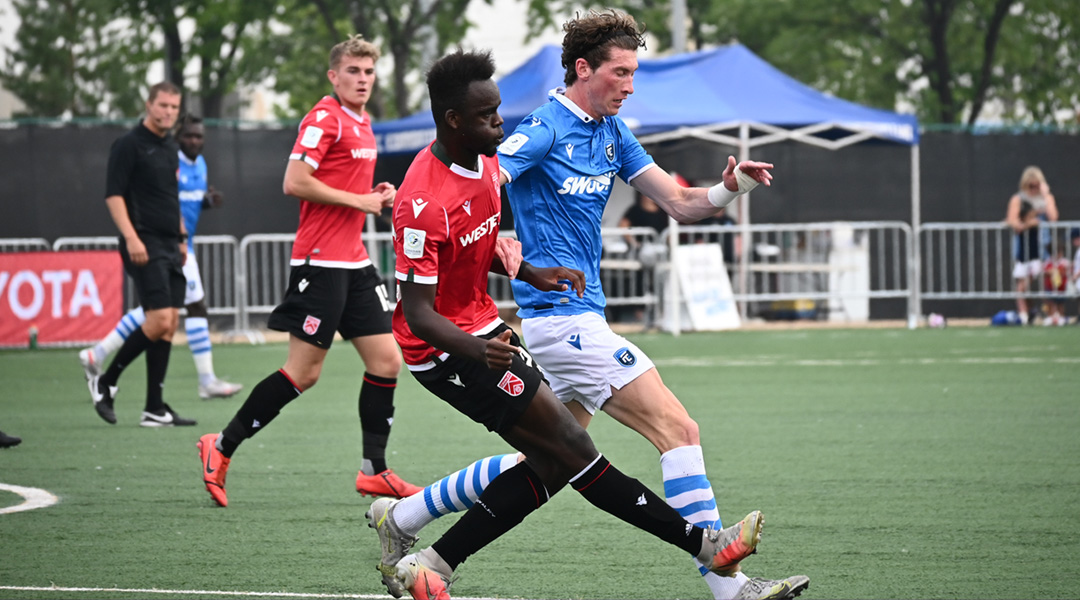 The first match of the 2021 Canadian Championship saw Cavalry FC surpass FC Edmonton in a 2-0 away victory at Clarke Stadium.

Cavalry FC head coach Tommy Wheeldon Jr. had been miffed to discover that he was the away side in this iteration of the tournament, but will have ultimately left Edmonton happy after goals from Joe Mason and Ben Fisk secured a quarter-final berth against either Pacific FC or the Vancouver Whitecaps next month.

Both sides saw plenty of rotation following their respective draws in the Canadian Premier League, with 20-year-old goalkeeper Darlington Murasiranwa getting his professional debut under Eddies head coach Alan Koch.

For the first thirty minutes he had much less to do than opposition goalkeeper Tyson Farago, who was called in to action to stop a chance from Hunter Gorskie and an absolute rocket from Jeannot Esua after a strong individual run from the full-back.

Cavalry FC then took the lead against the run of play, with Murasiranwa tipping a close-range header from Escalante into the crossbar before veteran Championship striker Joe Mason put the ball beyond the line:

It marked the second-ever Cavalry FC goal for the 30-year-old Englishman, who had opened his account against FC Edmonton in a league match earlier this month.

Eddies head coach Alan Koch then made some changes to kick off the second half, with former CF Montreal midfielder Shamit Shome and German striker Tobias Warschewski coming on for Kyle Porter and Matthew Durrans.

The tide would continue to sway in Cavalry’s favour, however, with Ben Fisk scoring his first goal in red to double the lead for the visitor’s in the 62nd minute after his shot took a kind deflection off of Esua:

Eddies substitute Fraser Aird drew a chorus of gasps from the crowd with a long-range effort that wasn’t far off in the 69th minute, though it went high of the net. He certainly has it in his toolbox, though it didn’t come together today.

With ten minutes left to go, Cavalry captain Nik Ledgerwood provided an off-the-line clearance during a crowded set piece to help Tyson Farago maintain his clean sheet, with Mohamed Farsi nearly scoring a last-gasp goal for the visitors as they collected a 2-0 win in the cup match.

The result sees Cavalry FC continue its dominant straight against Al Classico rivals FC Edmonton, with the Eddies having yet to defeat their local rivals in any competition. Tonight was their first meeting in the Canadian Championship.

Related Reading: Three Storylines To Watch In The CanChamp’s Opening Round

Cavalry’s upcoming Canadian Championship match against either Pacific FC or the Vancouver Whitecaps will take place in mid-September. In 2019, Cavalry reached the semi-finals of the domestic cup competition by making history as the first CPL team to beat MLS opposition after surpassing the Whitecaps.

The next match in the 2021 Canadian Championship will see the Halifax Wanderers take on AS Blainville this Tuesday. The match is available live on OneSoccer.