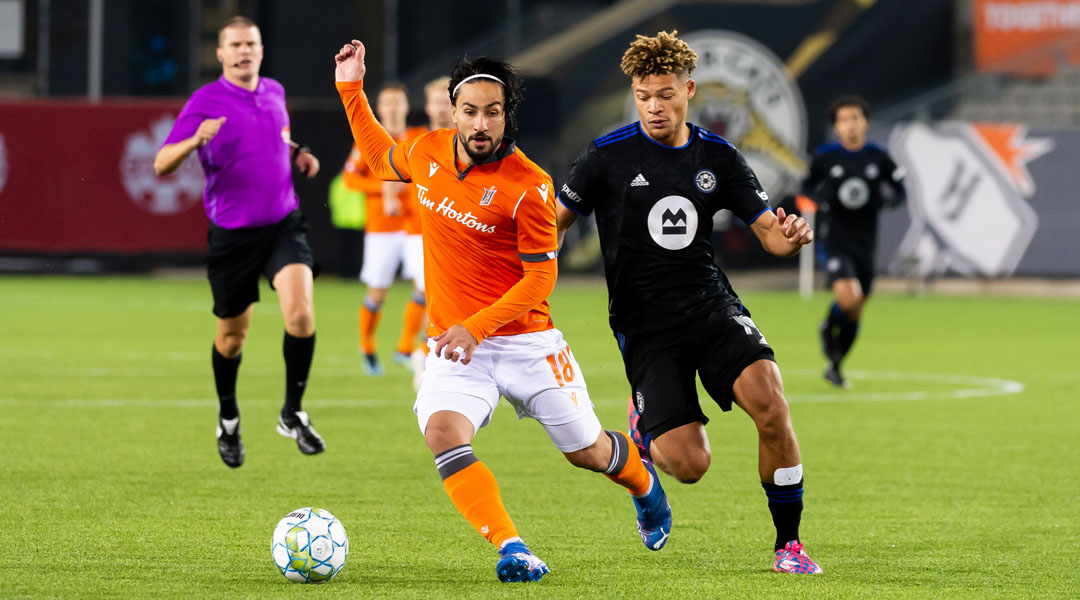 Reigning CPL champions Forge FC outshot MLS competitors CF Montreal by a near 3-to-1 ratio in a Canadian Championship semi-final that saw a scoreless 90 minutes give way to penalties, with a dramatic shootout then cycling through all eleven available players before goalkeeper Sebastian Breza scored to take CF Montreal to the final.

CF Montreal is now 90 minutes away from retaining the Voyageurs Cup after a nervy eleven-round penalty shootout that saw goals, saves, and misses test the nerves of even the most resolute supporters, especially after Forge looked perhaps the better side across ninety minutes of action on the pitch.

The match also marked the first time that Forge FC has hosted MLS competition at Tim Hortons Field, though the club still has a much-belated 2020 Canadian Championship Final against Toronto FC to play which may be delayed all the way to 2022.

CF Montreal head coach Wilfried Nancy opted to rest several of his starters to keep those legs fresh for an MLS playoff push, whilst home side Forge FC put forth a full strength starting eleven with some good off-the-bench options like former CF Montreal men David Choiniere and Omar Browne.

A respectful first half saw both teams split possession fairly evenly, with both clubs seeing a handful of chances: CF Montreal forced Triston Henry into his first stop ten minutes in, but then saw a great chance go begging moments Hamdy forced his way into the box to oblige a rebound from the keeper, who inadvertently deflected it right into the path of Sunusi Ibrahim. The forward little time to react, however, and he sent the ball high.

The first half seemed to be settling into a rhythm with most of the action in the middle of the pitch, though Forge gained momentum as the half neared its close. Omar Browne nearly bagged one against his old club with a close-range rebound effort in the 36th minute, and a freekick opportunity a few minutes later saw the Panamanian striker blast the ball slightly high of the top corner.

Forge midfielder Kwame Awuah got the crowd to emit a chorus of ‘oohs’ as the second half got underway, with the NYCFC man loosing a shot at the edge of the box that sailed just high of the net.

Seconds later, Babouli got beyond Piette on the wing to send in a great ground pass that curled just past the reach of Sebastian Breza, but an at-full-stretch Emery Welshman was unable to tap in what ultimately was the best chance of the match.

Piette, perhaps showing some frustration, would collect a yellow minutes later after pulling back 2019 CPL MVP Tristan Borges as the midfielder was breaking free beyond him.

A wonderfully deceptive freekick from Bekker then saw Awuah gain possession in space at the left side of the box, with the midfielder cutting back a tantalizing ball that couldn’t find a solid finish between three awaiting Forge men.

Forge continued to apply pressure on a waning Montreal defense, with Babouli putting in a nice through ball that saw Welshman slot in between two defenders to force another save from Breza.

The cards would flow mostly CF Montreal’s way throughout the match, with referee Yusri Rudolf handing yellows to Miljevic, Piette, Waterman, Borges, and substitute Ballou Tabla, who had made the difference against Halifax with a late brace in the quarter-final.

The MLS visitors found stronger footing as the second half progressed, suddenly seeing balls reach the final third and broach the Forge box – though the CPL hosts would hold firm for the full ninety and force the match to penalties, with heaving chests revealing a side that gave regular time their all.

A nervy penalty shootout that contained multiple saves and misses from both sides eventually saw CF Montreal emerge victorious after eleven shooters apiece, with the MLS side recording conversions from Lappalainen, Tabla, Kamacho, Zouhir, Struna, Bassong, Bayiha, and Waterman, with the final goal belonging to none other than CF Montreal goalkeeper Sebastian Breza himself, who had saved a shot from Forge goalkeeper Tristan Henry moments prior.

The penalty scoreline was, at the end, an unbelievable 8-7.

CF Montreal now advances to the Canadian Championship Final with the dramatic penalty win, though their opponent won’t be determined until Toronto FC and Pacific FC play the accompany semi-final next week at BMO Field.