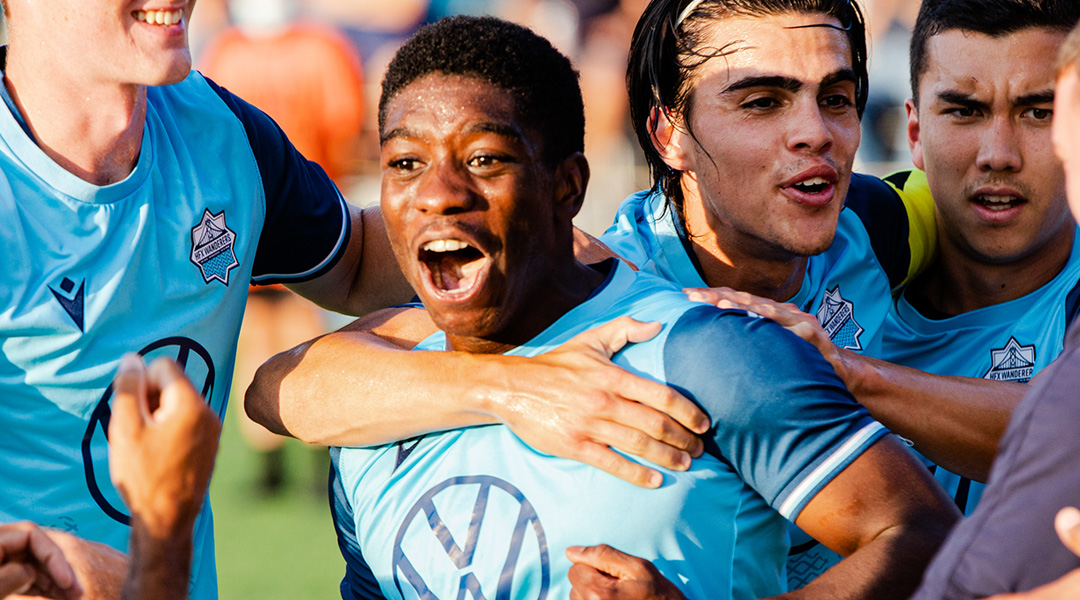 The second preliminary round match of the 2021 Canadian Championship saw Canadian Premier League side Halifax Wanderers survive a second half scare to secure victory over PLSQ visitors AS Blainville.

The 2019 Canadian Championship had seen AS Blainville come ten minutes away from forcing York9 FC (now York United) to penalties across two legs, with the Quebec-based team having come just twenty minutes away from the feat this time around.

The Halifax Wanderers started well, putting forth some consistent pressure which didn’t take long to pay off: former AS Blainville midfielder Pierre Lamothe sent in a near-post corner kick that found the run of English striker Cory Bent, who fired in a tidy volley on the ten minute mark.

The Wanderers were comfortable to play a slow possession game as the first half progressed. The east coast side nearly doubled the lead with a spectacular out-of-the-box volley by Marcello Polisi in the 43rd minute, though the shot went just wide of the far post.

AS Blainville was handed a lifeline in the 51st minute, with rookie goalkeeper Keiran Baskett bringing down Guy-Frank Essome Penda. The referee signaled for a penalty, with the IT analyst stepping up to the penalty spot and calmly converting his chance:

A clash of bodies a few minutes later resulted in a significant skirmish between the two sides as the match hit a fever pitch, with referee Ben Hoskins handing out yellows to Blainville’s Amiri, Leconte, and Faked, along with Wanderers full-back Mateo Restrepo.

Hart then brought on another former Blainville man in Stefan Karajovanovic alongside Joao Morelli, with the substitutions suggesting an attack-minded change from the gaffer.

The reigning PLSQ champions then nearly scored a freak own goal in the 65th minute, but escaped a situation where an awkward deflection came inches away from putting the home team in front.

Akeem Garcia had been proving a problem for the AS Blainville backline all match long, with the Trinidad and Tobago international earning the home team a penalty in the 71st minute after Blainville keeper Yesli caught all of the forward and none of the ball.

Brazilian substitute Joao Morelli stepped up to take it, with his slow shuffle sending the six-foot-seven CPL-U SPORTS Draft pick the wrong way to restore the lead for the Wanderers:

With six minutes left to go, Yesli would come up big to deny Wanderers defender Morey Doner, who had cut inside and fired a well-placed shot that seemed destined for the far corner.

Two more chances would come for AS Blainville, but in both cases Keiran Baskett came up big to lay claim to aerial balls that were encroaching into his box.

The final whistle from Ben Hoskins would confirm that the Halifax Wanderers would be the side marching on, while AS Blainville’s Canadian Championship campaign concludes in the preliminary round.

The domestic cup competition opened with an Al Classico last weekend, with the rest of the preliminary round matchups set to come over the next seven days – including a CPL-versus-MLS clash.

The Halifax Wanderers now advanced to face the current Voyageurs Cup holders, CF Montreal, in the quarter-finals next month.

The 2019 Canadian Championship had seen the east coast side defeat League1 Ontario’s Vaughan Azzurri before falling to a 5-4 aggregate loss to the Ottawa Fury.