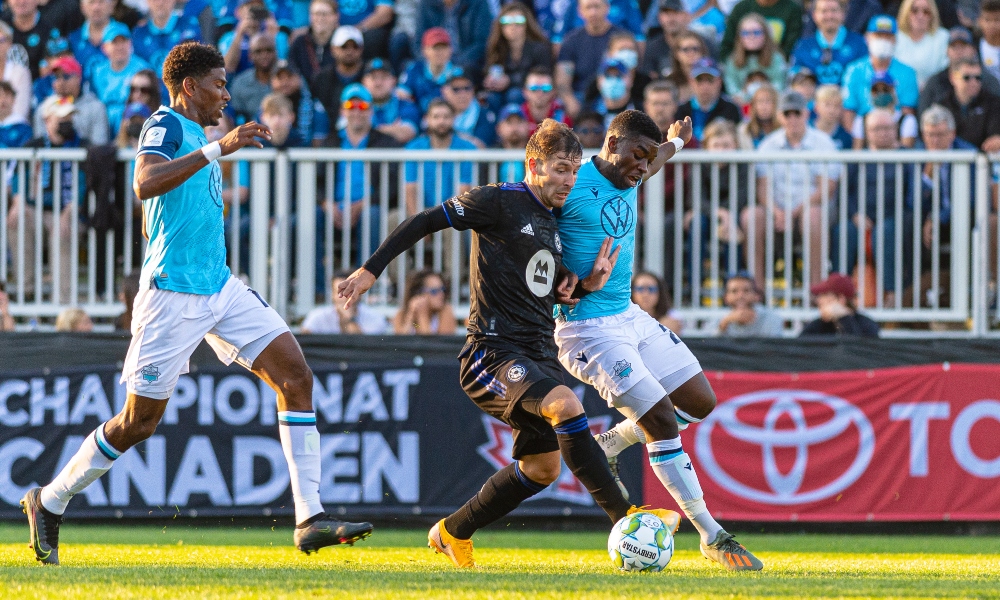 The second CPL-vs-MLS matchup of the 2021 Canadian Championship saw two late goals from Ballou Tabla deliver a 1-3 victory for CF Montreal in a match that came minutes away from a potential penalty shootout.

The MLS visitors fielded a fairly rotated lineup against Halifax, with heavy hitters Victor Wanyama, Djordje Mihailovic, and Romell Quiotto rested for the occasion, and former CPL standout Joel Waterman suiting up for the visitors.

The Halifax Wanderers entered the match with CPL Golden Boot leader Joao Morelli in the lineup, with 19-year-old goalkeeper Kieran Baskett continuing his call to cup action after making his club debut in the preliminary round against AS Blainville.

The reigning Voyageurs Cup holders came out strong, dominating possession and carving out a handful of opportunities early on, with Matko Miljevic missing a golden opportunity after finding himself in space in front of the net early on, but scuffing his shot as defenders desperately closed in.

Against the run of play, Halifax struck first blood after Englishman Cory Bent won possession and followed up a wonderful solo dribble with a phenomenal right-footed shot from outside of the box, which coasted above Sebastian Breza and into the back of the net:

The visiting team didn’t take long to show why they were the favourites, with Miljevic finding time to take two touches in the crowded box to equalize for the MLS visitors just eight minutes later:

CF Montreal would be the first side to make moves in the second half, with Tabla and Lappalainen coming on to replace Hafez and Miljevic, the latter of whom will have felt he could have impacted the fixture more despite bagging the equalizer.

The 49th minute saw Halifax goalkeeper Kieran Baskett – who was playing college ball last year – come up big with a close range save, changing the directory of a Miljevic’s shot to allow for a hasty clearance and keep the scores level.

CF Montreal Captain Samuel Piette saw two opportunities pass him by as the second half wore on, with his second coming just inches from procuring the go-ahead goal.

Marcello Polisi appeared to be on a strong counter for the east coast home team moments later, but the roars from the crowd following his dispossession did little to convince the that a foul had occurred.

The Halifax Wanderers were one minute away from forcing the match to penalties when CF Montreal’s 19th shot found the back of the net, with an absolute rocket from Ballou Tabla scorching the top of the net to give the the reigning Voyageurs Cup champions a late edge.

The Halifax Wanderers would find themselves shell-shocked in added time, with Ballou Tabla finishing well to score twice in three minutes to settle the affair for the favourites.

CF Montreal will now go on to face reigning CPL champions Forge FC in the semi-final round, which is expected to take place in late September. The Hamilton-based side is also awaiting a belated 2020 Canadian Championship Final against Toronto FC.