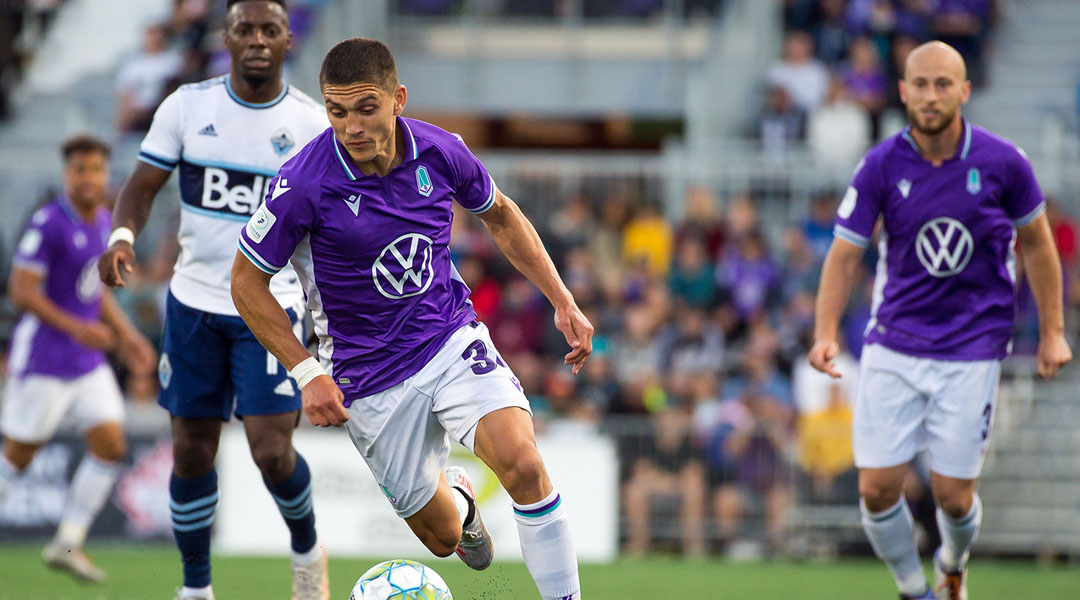 The preliminary round of the Canadian Championship saw a significant upset tonight as Canadian Premier League side Pacific FC defeated the Vancouver Whitecaps 4-3.

The seven-goal thriller saw the Whitecaps only level for a number of minutes throughout the match, with a brace from designated player Ryan Gauld and a penalty from Dajome not enough to undo four goals from the home side.

It becomes only the second time a CPL team has defeated MLS opposition, with the Whitecaps finding themselves on the receiving end of both moments.

Pacific FC accomplished the feat tonight without star player Marco Bustos, who suffered a minor knock to miss a reunion against his former team. The Whitecaps still entered the game as firm favourites, however, with head coach Marc Dos Santos fielding a strong starting eleven that saw Scottish midfielder Ryan Gauld given his first start.

Vancouver Whitecaps goalkeeper Maxime Crepeau had predicted that Pacific would come out ‘with knives in their teeth‘, and the home side delivered: after going on the attack through the opening five minutes, the side earned a penalty after a scramble in the box saw Jake Nerwinski penalized for a foul on Terran Campbell.

Having converted a penalty in league play earlier this week, the former VWFC2 forward stepped up and fired home another one in cup action:

The hot start for the Tridents became undone in the thirteenth minute after Pacific goalkeeper Callum Irving failed to hang on to an aerial ball, with Gauld making the best of the moment to fire home a scrappy equalizer for the MLS visitors:

Pacific FC head coach Pa-Modou Kah and midfielder Manny Aparicio both collected yellows for their reactions following the goal, with referee Juan Marquez in no mood to hear too much dissent from the duo.

Momentum appeared to be shifting in favour of the Whitecaps, but the 28th minute saw Manny Aparicio collect the ball in the opposition box, burst to the right, and fire an absolute rocket into the top left corner beyond the reach of Maxime Crepeau.

The remainder of the first half would see a few nervy moments for the Tridents, with Vancouver pressing hard on the back four but ultimately being unable to find an equalizer in the first forty-five. Their closest opportunity to equalize came through Brian Wright in the 24th, when the American headed the ball just wide of the net.

Marc Dos Santos made an attacking change to kick off the second half, with Deiber Caicedo replacing Ryan Raposo.

Still, it was Pacific FC who began to probe: Terran Campbell nearly handed the home side a two goal cushion in the 56th minute, with a tight-angled headed forcing a fine stop from Crepeau.

Pacific’s Josh Heard was seemingly everywhere on the pitch, eventually finding himself in just the right spot to burst forward on the left flank, make space from Andy Rose, and slot the ball into the back of the net to make it 3-1.

The next few minutes saw Pacific FC apply even more pressure, with substitute striker and former Liga MX man Alejandro Diaz forcing a stop from Crepeau, and Campbell being bested in a one-on-one just seconds later.

Dajome and Gauld then combined to bring the Whitecaps back within touching distance, with a brace for the Scotsman giving hope for the visitors in the 66th minute.

Pa-Modou Kah then made a defensive change in an effort to hold onto the single-goal lead, with Kunle Dada-Luke coming on to replace Terran Campbell in the 73rd.

The Tridents earned themselves a freekick in the 15 minutes from time, with Aparicio’s resulting kick deflecting into the box for Diaz to instinctively knock home.

The match looked likely to see a seventh goal just three minutes later, with the Whitecaps striking the post before a hasty clearance from Lukas MacNaughton preserved a two-goal cushion for the home side.

A freekick in the 97th minute saw the Whitecaps awarded a penalty in the dying seconds of the match, with Blasco collecting a yellow for a foul before Dajome stepped up for the spot kick. Irving made the save, but Danone pounced on his rebound to score a third goal for the visitors.

The final whistle confirmed that the Whitecaps had been capsized by a proverbial iceberg in Pacific FC, who saw out a thrilling 4-3 match that saw the home team lead for the majority of the match.

With Pacific FC hosting twelve players who developed through the Whitecaps system, it’ll be a memorable night for the Canadian Premier League side, and one for the history books too.

The team is top of the table in league play, and is now set for a cup rematch against Cavalry FC in the Canadian Championship quarter-finals. The Alberta-based side had knocked both Pacific FC and the Whitecaps out of the competition in 2019, so it’s sure to be a fiery affair.

The quarter-finals will also two more CPL-vs-MLS clashes, with the Halifax Wanderers hosting CF Montreal, and York United travelling to Toronto FC. After tonight, one imagines that the MLS sides will field a healthy respect for their CPL opposition in those games, too.