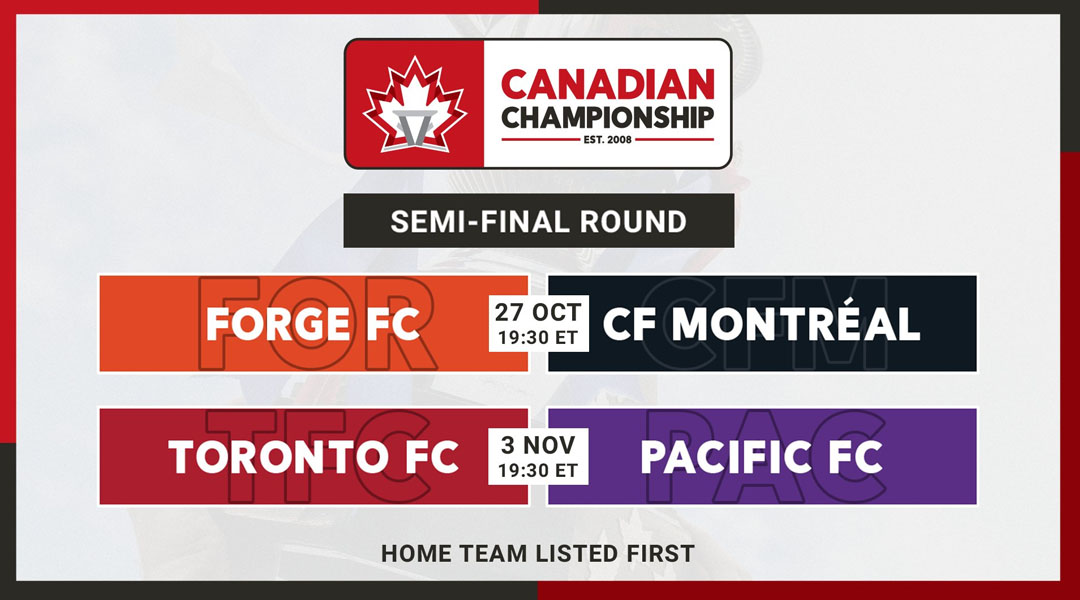 Canada Soccer has announced the schedule for the 2021 Canadian Championship semi-final round, which will see two CPL-vs-MLS matchups with hosting duties split evenly between leagues for the single leg affair.

While Pacific FC head coach Pa-Modou Kah had hoped for a home match at Starlight Stadium, Toronto FC will be hosting the side at BMO Field come Wednesday, November 3 at 7:30PM EST. It means the MLS side will enjoy back-to-back home matches in this year’s cup competition, though it’s no secret that some of the players had initially hoped to travel for the domestic competition.

The winner of each semi-final will advance to the 2021 Canadian Championship Final, with Canada Soccer set to determine the date and location sometime in November. Whoever ultimately lifts the Voyageurs Cup will win a berth in the 2022 Concacaf Champions League.

The Canadian Championship provides Canadians an opportunity to see the best of professional Canadian soccer played with a chance to represent the country in Concacaf Champions League. For fans of the 13 participating clubs from coast-to-coast, the Canadian Championship has provided new rivalries, new opportunity, and a chance to face the region’s top clubs on the pathway to the FIFA Club World Cup and we are confident that the Semi-Finals and Final will add to the competition’s celebrated history.

This year has seen three MLS teams, eight CPL teams, and two semi-professional teams participate in the tournament, with the preliminary round seeing a Cavalry best FC Edmonton in a cup-based Al Classico, the Halifax Wanderers survive a scare against AS Blainville, York United dominate Master’s Futbol Academy, Atletico lose its first-ever cup match against Valour, and the Vancouver Whitecaps get upset 4-3 by Pacific FC.

Rumours indicate that all four sides in the semi-final round had hoped to host, resulting in a coin flip decider reportedly taking place. Canada Soccer did not disclose its methods for deciding who will host at this stage.

Entering the penultimate round, Valour forward Austin Ricci still leads the goalscoring charts with three from two appearances, while a five-way-tie for second place includes Cory Bent, Julian Ulbricht, Ryan Gauld, Terran Campbell, and Ballou Tabla, with only the latter two still in the competition.

The Canadian Championship schedule will surely result in some fixture moving for all involved. This post will be updated with that information as it becomes available. The CPL states a league update for such will be made within the next 48 hours.