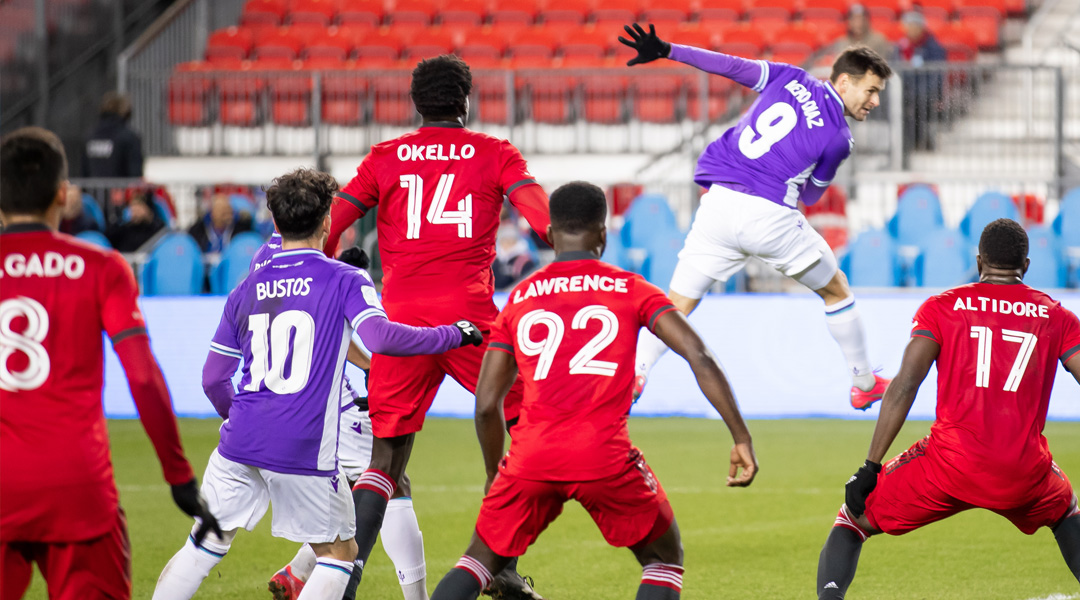 Toronto FC set up an all-too-familiar Canadian Championship Final against CF Montreal after dispatching CPL side Pacific FC 2-1 at home.

Goals from Jozy Altidore and Jacob Shaffelburg highlighted a mostly well-controlled performance from the home team, with Pacific’s defense struggling to deal with a high press from MLS opposition. The visitors did well to pull one back in the second half, especially after club talisman Marco Bustos had left with a knock.

Toronto FC had made it crystal clear that the MLS side wasn’t taking the knockout match lightly, with head coach Javier Perez fielding a full-strength lineup to reflect that: designated players Jozy Altidore and Alejandro Pozuelo fit into a very strong-looking squad led by longtime captain Michael Bradley.

Included was Newfoundland’s Jacob Shaffelburg, a no-shock starter after his two-assist performance against York United in the quarter-final. The MLS side elected to have three other Canadians in its starting lineup, with Jonathan Osorio and Richie Laryea getting the nod as Noble Okello replaced Omar Gonzalez just minutes prior to kickoff.

Pacific FC head coach Pa-Modou Kah had been looking forward to utilizing the match as a measuring stick for his players, many of whom he believes can move on to a higher level. It was a full strength lineup from him, barring the absence of forward Terran Campbell who missed the affair through yellow card accumulation.

Liga MX veteran Alejandro Diaz was the lone international in the starting eleven for the visitors, with the striker having previously visited BMO Field during his time with Club America in 2018.

The Tridents started off with a bang, immediately breaking into the TFC box but seeing the opportunity squandered after a wayward ground ball, with Shaffelburg then looking threatening on the opposite end of the pitch.

The opening fifteen minutes saw Pacific probe the flanks dangerously, but it was TFC who struck first after overwhelming the Tridents in the middle: Jozy Altidore received a slick through ball and, taking a touch inside the box to steady himself, fired a well-placed shot that went off the far post and in:

The MLS side nearly doubled the lead just moments later, with a corner kick seeing the side cleverly direct the ball goalward from close range, though PFC goalkeeper Callum Irving was in the right spot to tip it over for another set piece.

Toronto FC then doubled the lead after some sharp passing on the wing saw Jacob Shaffelburg – who has proven potent against CPL opposition before – find a sliver of space between three defenders to blast home a second for TFC:

Some good hold-up play by Altidore then allowed the big striker to slip in Alejandro Pozuelo, but the Spanish midfielder fired his shot just wide of the net. With Toronto FC piling on the pressure, however, it was clear who was in control of the match as the first half progressed.

Things from bad to worse for Pacific as club talisman Marco Bustos stayed down after a foul in the 37th minute. After having just recently returned from injury, it was a frightful moment for fans as he walked to the sidelines, with the midfielder seeing out the first half before being substituted.

The Reds nearly bagged themselves a third just before that, with Shaffelburg one-timing the ball from the middle of the box on a counter but blasting it directly at Irving, who put it out for a corner.

The Tridents showed some life at the other end with a half-chance from Marco Bustos, with Manny Aparicio – a former TFC signing himself – closing out the first half by launching an absolute out-of-the-box rocket akin to his goal against the Whitecaps, though Westberg was able to tip it over the bar.

Irving came up big with another big save ten minutes into the second half, with Toronto FC’s continued onslaught of the left flank seeing Shaffelburg sent in a tantalizing ball for Altidore to strike from close range.

The pace of the game lapsed as the second half progressed, with Shaffelburg breaking a longstanding lull in play to send in a cross that substitute Ifunanyachi Achara fired wide. Without a doubt, the young winger was putting in a man-of-the-match shift.

Pacific wouldn’t let Toronto FC have a comfortable finish, however, with the visitors pulling one back after an outstretched Michael Bradley couldn’t stop Kadin Chung from setting up a tidy finish for Alejandro Diaz with less than ten minutes to go:

Toronto FC then had a penalty shout just before added time, with Shaffelburg going down hard in the box before he was substituted out to much applause from the home fans.

The improbable comeback wasn’t to be for the Tridents, however, with Toronto FC running out 2-1 victors over Pacific FC to advance to the 2021 Canadian Championship Final. The side is also set to play a belated 2020 cup final potentially as late as next year.

Pacific FC now bows out of the competition after a strong showing that saw the side defeat the Vancouver Whitecaps and Cavalry FC en route to tonight’s loss to TFC.

The MLS victors now march on to a familiar-looking cup final against CF Montreal, who won the 2019 edition of the tournament through penalties at BMO Field and advanced to this year’s final by an eleven round penalty shootout.

The final date and location of the 2021 Canadian Championship Final have yet to be announced by Canada Soccer.