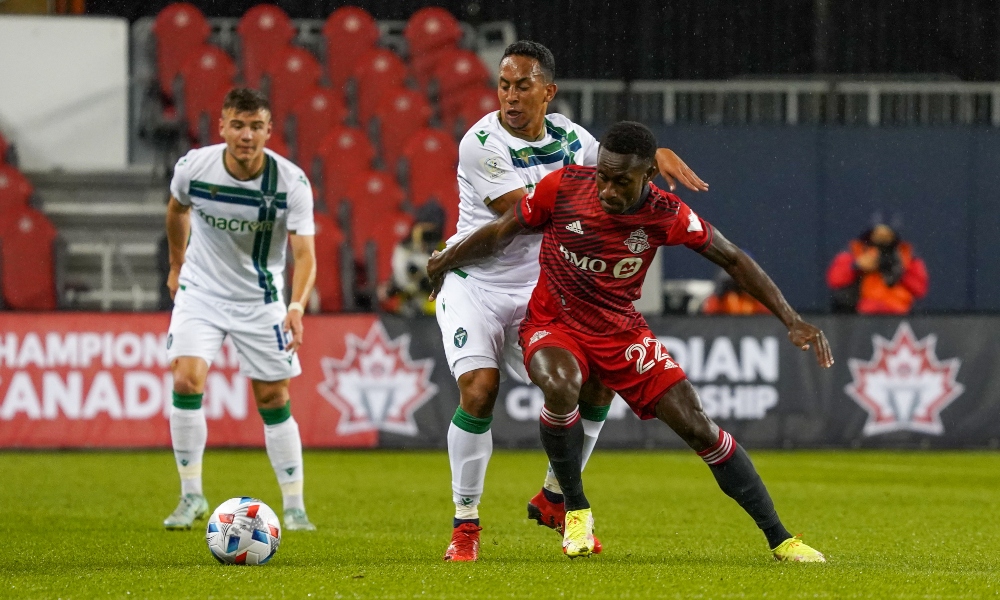 Toronto FC recorded a comfortable home victory over York United at BMO Field, with a 4-0 scoreline seeing the side buoyed into the Canadian Championship semi-finals.

The first-ever meeting between the two Toronto-based teams saw Toronto FC control most of the possession, utilizing a creative midfield that forced York United to push forward aerially on a handful of counters against the run of play.

With Toronto FC’s league hopes dwindling, head coach Javier Perez opted not to take chances in terms of his domestic cup line-up: the regular backline suited up behind Michael Bradley, Jonathan Osorio, and Marky Delgado in midfield, with with Jacob Shaffelburg and Yeferson Soteldo playing forward behind Ifunanyachi Achara.

Helmed by former TFC Captain Jim Brennan, visiting side York United fielded its full-strength lineup for the first-ever bout between the two teams, with Brennan showing trust that high-profile CPL players like Diyaeddine Abzi, Max Ferrari, and Michael Petrasso could combine for a potential upset.

The opening minutes saw Toronto FC control the bulk of possession, though a few giveaways saw the Nine Stripes come forward in bursts from a handful of long balls, with York United typically opting to play over the Toronto FC midfield rather than through it.

The eighth minute saw a quick cross from Jacob Shaffelburg nearly deflect into the Nine Stripes net, with the ball taking an awkward bounce off of Chrisnovic N’sa before settling into the side netting. It wouldn’t be the last time crosses from the Nova Scotian troubled York United.

Venezuelan international Yeferson Soteldo also looked dangerous early on, striking a long range effort in the eleventh minute that wasn’t far off, and following it up by creating space for himself between a cluster of Nine Stripes defenders before his play-in pass fizzled out as its recipient slipped on the wet pitch at BMO Field.

Soteldo proved to be the go-to danger man in the middle, drawing defenders in to him inside the box before passing the ball to Bradley. Achara eventually got a shot away which forced a corner from the visitors, but the deadlock would remain early on.

The Nine Stripes would scrape by the opening 20 minutes out-shot five-to-two, with Ingham making a big stop as his team tried to hit Toronto FC on the counter against the run of play – and with Noah Verhoeven even attempting an audacious Olympico in the 23rd minute.

Soteldo continued his role as chief playmaker in the first half, combining well with Bradley to nearly slip in Jacob Shaffelburg before a last-ditch block from Chrisnovic N’sa stopped the threatening counter.

Toronto FC would find the breakthrough goal in the 33rd minute, with Jonathan Osorio finding himself wide open at the far post to head in one of the easier goals of his career and his sixth-ever in the domestic cup:

Toronto FC wouldn’t have to wait long to be rewarded a second time for its continual pressure, with Achara providing a powerful close range finish following another sharp cross from Shaffelburg just a few minutes later:

The Nova Scotian midfielder would nearly bag a hat-trick of assists just minutes later, supplying another sharp cross to Soteldo, with the diminutive Venezuelan firing a powerful blast that was parried away from a well-positioned Nathan Ingham.

The second half would open with both sides going for the attack, with Soteldo forcing another stop from Ingham four minutes in, and the resulting corner forcing a scramble as the ball bounced around the box.

The Nine Stripes goalkeeper would do well to deny a charging Achara ten minutes later, with the 28-year-old daringly coming out of his box to clear the ball after a hefty touch from the Nigerian forward.

Patient buildup from Toronto FC resulted in another near-own-goal as the second half wore on, with Jonathan Osorio collecting the ball out wide and firing a quick one that bounced off Dominick Zator and just over the net.

Marky Delgado fired a long range effort that curved inches wide of the post in the 70th minute, prompting a chorus of ‘oohs’ from the home supporters who endured a wet, rainy night at BMO Field to take in the cup match.

Solteldo looked to have surely bagged himself a goal as he found himself wide open in the middle of the box to receive a header from Shaffelburg, with Ingham rising well to tip the ball away from the line.

The Nine Stripes saw a glimmer of hope twelve minutes from time, with the ball glancing straight through the Toronto FC box but ultimately finding no York United boot to finish the chance. A daring run from Diyaeddine Abzi was cut short moments later, with York United actually gaining the upper hand in possession for the second half.

Still, Soteldo would finally carve his way onto the scoresheet by way of a penalty kick eight minutes from time after substitute Marshall-Rutty was taken down in the box:

Noble Okello would then coolly collect a goal of his own just minutes after coming on, finding himself in space out on the right before advancing and deftly putting the ball beyond Ingham to ensure Toronto FC saw a healthy two-goal return in each half:

At the final whistle, Toronto FC shun bright despite the rainy weather, recording a comfortable 4-0 victory over York United in the first-ever meeting between the pair.

Toronto FC will now face either Pacific FC or Cavalry FC in the Canadian Championship semi-final, depending on who ultimately wins later tonight. Both of those teams have defeated MLS opposition before, but Toronto FC will be considered the favourites regardless.

The 2021 Canadian Championship semi-finals will take place in late September.