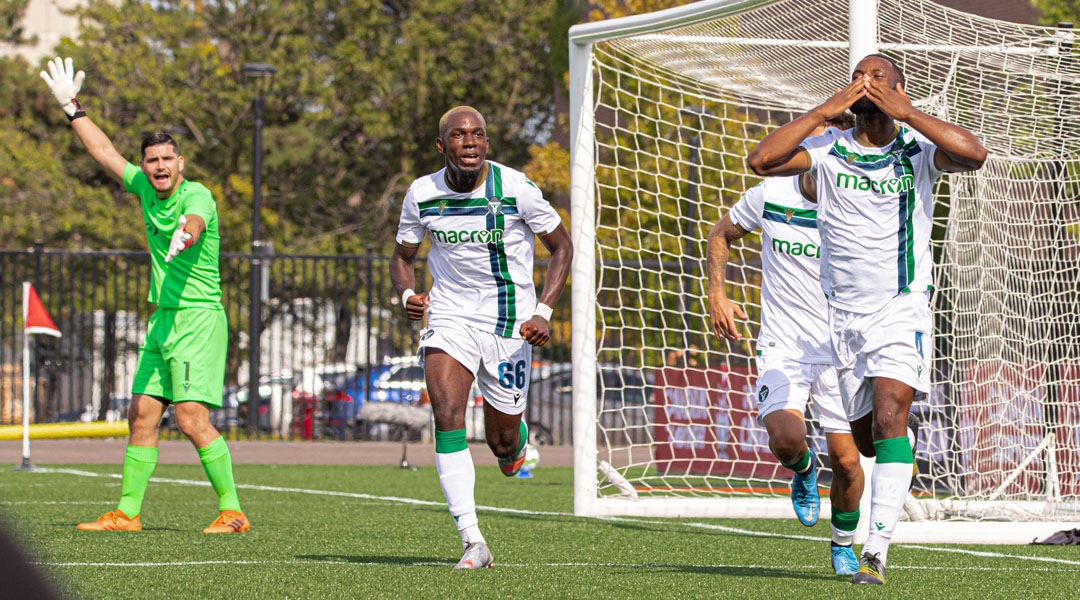 Toronto FC’s first-ever signing – and captain – will now be leading a team against his former club in the Canadian Championship.

York United head coach Jim Brennan saw his side complete a comfortable 5-0 win over reigning League1 Ontario champions Master’s Futbol Academy this afternoon, with the hot thirty-degree weather not slowing down a respectful-looking starting eleven from the Nine Stripes.

While Master’s Futbol Academy put out a few individually sharp moments, it was York United that dominated the match from start to finish. The Nine Stripes first broke through in the 38th minute, with Isaiah Johnston bursting forward to find Max Ferrari, with the 21-year-old firing in the go-ahead goal for the home side:

Master’s Futbol Academy would concede a second just before half-time, with Michael Petrasso loosing sharp low cross that was fired into the net by American striker Oszvaldo Ramirez, who broke the duck’s proverbial back in his thirteenth appearance for the side:

At half-time, Master’s Captain Adam Czerkawski described recieving an ‘energetic’ half-time talk by head coach Rick Titus, and the League1 Ontario side responded by nearly scoring right from the get-go, though strong stops from Nathan Ingham stopped Master’s momentum in its tracks.

York United then secured a third, with Michael Petrasso once again turning provider, this time for Jordan Wilson. He found himself open and surrounded by teammates rather than the Master’s backline, and just like that the home side was 3-0 up.

York United continued to dominate possession at this point, with substitute striker Julian Ulbricht converting a penalty five minutes from time after Chrisnovic N’sa was fouled in the box. It was the German’s first goal for the Nine Stripes:

The 91st minute would see another celebration for the home side, with Ulbricht grabbing a brace following a nice backheel pass from debutant Sebastian Gutierrez and an errant shot from Faria that happened to role perfectly to Ulbricht. He took a touch and converted from close range before he could be closed down:

Referee Scott Bowman called play to a holt not long after it restarted, with York United securing what was ultimately a very comfortable 5-0 performance, though he refrained from calling it a perfect night all-around: Brennan lamented players picking up unnecessary yellows, with Ozvaldo getting one for a comment made to the referee after being called offside, whilst Rivero got one for delaying the restart while 3-0 up.

Still, York United have set itself up nicely for a high-profile affair against Toronto FC next month.

The 2021 Canadian Championship has seen an Al Classico land in Cavalry’s favour, while the Halifax Wanderers survived a second half-scare against AS Blainville to advance. In 2019, AS Blainville nearly forced York9 FC (now York United) to penalties in this round of the competition, with York nearly upsetting the Montreal Impact in the next round.

While it remains to be seen if things will be different against MLS opposition next month, it’ll be a good opportunity for York United’s athletes to impress against a club in which many have ties to – and others will simply want to put on a good showing at BMO Field. As Brennan says, these single leg cup matches aren’t so simply – momentum can often-times swing either way.

The preliminary round of the 2021 Canadian Championship sees Atletico Ottawa hosting Valour FC this evening, before the round closes with a west coast CPL-vs-MLS matchup this Tuesday.