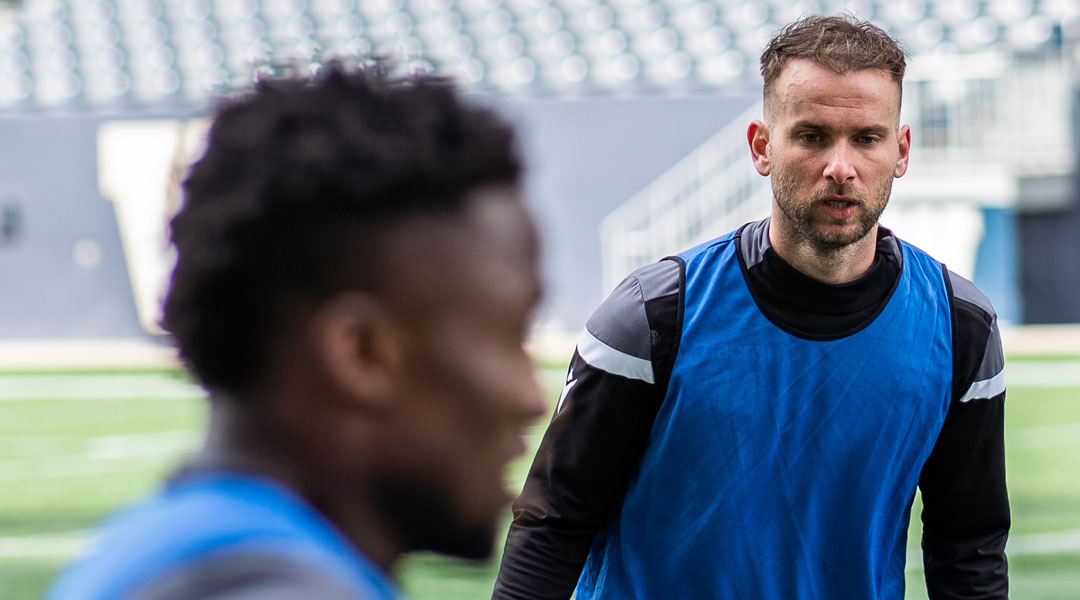 With the 2021 Canadian Premier League season set to kick off in just eight days, teams are now heading into the final week of preseason preparation before the calendar arrives at a month-long bubble tournament filled with competitive fixtures in Winnipeg, Manitoba.

The league is hopeful that clubs will be able to return to home markets with fans in the stands after that, though the first eight matches for each team will take place exclusively on Valour’s home ground, IG Field.

So, when is each team slated to arrive? With Marty Thompson revealing the dates, here’s a quick look at the arrival plans for all eight Canadian Premier League teams:

Atletico Ottawa has enjoyed what appears to be the most polished preseason out of any team in the league, so it’s no surprise that they’re the first to show up at IG Field beyond the hosts themselves.

The club utilized its partnership with Atletico Madrid well, flying its players out to Spain for a month-long overseas camp using world-class facilities. They’re the only side who got to enjoy preseason friendlies against multiple opposition sides while the other two Ontario-based teams couldn’t train at all due to provincial lockdown restrictions.

The expansion side will enter its second season with a much-refreshed roster, including eight players from the Soccerway roster leak, Spanish full-back Miguel Acosta, and the loan of Academy Madrid academy prospect Rafael Nunez, among others.

The Alberta-based side saw a lot of transformation this offseason: the defense and attack is mostly new faces, the latter of which is highlighted by Championship veteran Joe Mason (though he won’t arrival immediately) and the acquisition of Forge FC’s Anthony Novak.

The tough, always-pressing identity established by Tommy Wheeldon Jr. will be a true test of fitness for a side which only began preseason in mid-April, though midfield additions like Joseph Di Chiara and Richard Luca should help in that regard. Unfortunately, Elijah Adekugbe picked up a season-long injury not long after camp began.

With Tommy Wheeldon Jr. signing two locals today after teasing that the club still had an as-yet-unannounced ‘ace up its sleeve’ in terms of further additions, it’ll be interesting to see how the inaugural season runners-up stack up in the upcoming bubble segment.

Potentially arriving on the same flight as their Al Classico rivals, FC Edmonton will be hoping its second time in a bubble tournament goes smoother than its first: after going winless at last year’s Island Games tournament, the team with the most history of any CPL side will seek a fresh start.

After bringing in both a head coach and club president with extensive USL experience, the Alberta-based side has doubled down on influence from the American division: both Paris Gee and Hunter Gorskie were signed from the league, with the Eddies also recently acquiring Roberto Avila on loan from Austin Bold.

The club did well to retain the services of Canadian international Amer Didic, with the Eddies also securing the high-profile return of Shamit Shome following four seasons in Montreal. All told, there’s already nine new faces set to arrive with aspirations of challenging for the title.

With only one roster spot remaining open and the club’s domestic U-21 requirements already filled, it’ll be interesting to see who head coach Alan Koch completes his roster with. One would guess we’ll find out soon.

The reigning Canadian Premier League champions arrived in Winnipeg last night. Due to an impressive run in the Concacaf League last year, their offseason began the latest – though Ontario’s provincial restrictions meant the club couldn’t return to training until recently, with the club even having to cede a Champions League berth to Toronto FC as a result.

The Hamilton-based side has secured the return of essentially all of its core roster, though centre-back David Edgar retired and is now coaching with the side.

The reinforcements revealed by the hammer are an intimidating bunch so far: 2019 CPL MVP Tristan Borges, former CF Montreal striker Omar Browne, and Costa Rican attacker Joshua Navarro have all been loaned to the side. MLS Veteran Dejan Jakovic has also signed with the team.

All-told, Forge FC are already looking like strong contenders for a ‘three-peat’, but the growing quality of the league will give them plenty of competition.

Like last year, the Halifax Wanderers were the first team to resume preseason training camp: head coach Stephen Hart kicked things off on March 22, meaning last year’s runners-up have had longer to prepare than any other team.

The east coast side retained plenty of its core roster, including Golden Boot winner Akeem Garcia and Golden Glove nominee Christian Oxner. There’s been eight new signings for the side this offseason, with Hart once again leaning on Quebec-based talent with the likes of Jeremy Gagnon-Lapare, Pierre Lamothe, and highly-touted draft pick Kareem Sow.

With the likes of Aboubacar Sissoko and Chrisnovic N’sa having departed, it’ll be interesting to see how the side follows up an Island Games campaign that saw Hart pick up a coach of the year award.

This weekend will see the Tridents arrive with a familiar roster: head coach Pa-Modou Kah expressed the importance of continuity earlier this year, and he backed up the statement with plenty of re-signings.

The club’s already-stacked midfield saw powerful additions in Manny Aparicio and MLS SuperDraft hopeful Matteo Polisi (among others), though west coast fans may be a little worried at the back: with Marcel de Jong having retired and Duran Lee picking up a season-long injury, the left flank lacks depth.

Pa lead the team to a group stage finish at last year’s Island Games, instilling a thrilling counter-attacking mentality that saw Marco Bustos play a highlight role. One thing is certain: Pacific FC games are bound to be fun for the neutral.

The club also had a last-gasp scrimmage against the Vancouver Whitecaps at the end of March, though officials simply called this a ‘joint training session’.

Wait, what? It sounds confusing, but the hosts of the tournament – who have held their entire preseason at IG Field – don’t officially enter the bubble until Monday, at which point they won’t be able to interact with the rest of their own city.

Head coach Rob Gale has retained the majority of his core of his roster from The Island Games, adding in a few intriguing pieces like William Akio, Keven Aleman, and four players on loan while securing the last-gasp signing of Brazilian FIFA U-20 World Cup winner Rafael Galhardo.

With the club reportedly picking up a few injuries at preseason camp so far and still having a few noteworthy trialists in the mix, it’ll be interesting to see what the final roster looks like before the club starts off its ‘home’ bubble experience against Forge FC next Sunday.

After having to work with one of the shortest preseason camp windows of all time, the Nine Stripes are heading to Winnipeg tomorrow morning ahead of their first season as the rebranded York United.

We’re leaving seven days before the first game to give us a chance to get acclimatized and sorted out. Really, it’s about getting our whole team together and help build up that team. We didn’t wanna go too early because you end up something like seven weeks in a bubble. That’s draining and demanding.

After missing out on the group stage at The Island Games, the Nine Stripes underwent a significant squad overhaul that saw them take in seventeen new players – some of whom now arrive as replacements to other new international signings that couldn’t travel due to ongoing visa difficulties.

Unlike last year’s condensed tournament, the month-long bubble is just the start of this year’s campaign: the league is committed to a full 28 match schedule for each club, though it remains to be seen if and when the 2021 Canadian Championship can take place.

The 2021 Canadian Premier League season will begin on June 26 with coverage live on OneSoccer.