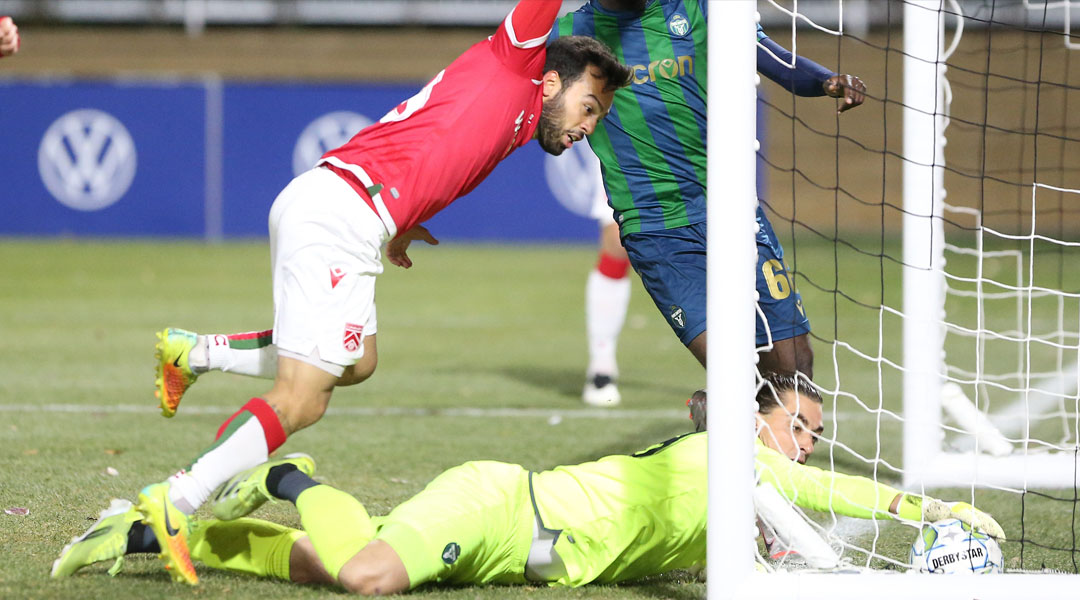 Cavalry FC climbed to the top of the Canadian Premier League table last night after a hard-fought 2-1 home victory over York United.

The Alberta-based side found itself off to a tough start to the match, dominating three quarters of the possession early on but seeing Isaiah Johnston score a go-ahead goal for the visitors just five minutes from kickoff, with the youngster converting a cross from Julian Ulbricht on the counter.

With team captain Nik Ledgerwood being substituted off not long after after that and potentially joining an increasingly long injury list for the side, it seemed like a long night was ahead for Tommy Wheeldon Jr.’s Alberta-based side.

Instead, a lovely corner kick from Jose Escalante was coyly finished by dangerman Sergio Camargo in the 23rd minute, with the ball spilling over the line before York United’s Nathan Ingham could scoop it away. While the flickering goal lights overlooked a scene of confusion as neither side was fully certain if a goal had been scored, the referee ultimately made the right decision: it was all square at ATCO Field.

A player scrimmage at the tail end of the first half would see Cavalry’s Joseph Di Chiara collect red card from two yellows against his former team, with the 29-year-old receiving an immediate booking for grabbing Max Ferrari by the throat. The second half saw head coach Tommy Wheeldon Jr. play more compactly at the back, later quipping “We’re gonna start Sunday’s game with ten men, because we defend better with ten.”

York United was now in the driver’s seat for the second half, but struggled to create clear-cut chances that were critical to Cavalry: the side procured nineteen shots on the night, but only eight went on target with only the one going in – a disappointing conversion rate that has been a repeat talking point for head coach Jim Brennan.

Still, Cavalry’s Marco Carducci was forced into big stops throughout the second half, including a kick-away save for a close-range Michael Petrasso header. His man-of-the-match performance kept Cavalry on equal footing, and late into the game they took advantage of another well-constructed set piece to equalize after Daan Klomp headed the ball in front of goal and Chrisnovic N’sa couldn’t stop his momentum from carrying it over the line:

It wouldn’t be the first time Cavalry FC scored against York United while under ten men, either: in 2019, a nine-man Cavalry FC saw Nico Pasquotti score the go-ahead goal in the 82nd minute, with York9 FC (now York United) rescuing a point in the 96th that night through Wataru Murofushi.

Tommy’s side would stay organized to see out the 2-1 victory this time, however, with three points seeing the side rise to usurp the top spot from a Pacific FC side who have held a firm grip on the position for over a month.

York United have now lost their game-in-hand as the race for the fourth and final playoff spot grows ever-tighter, with the Halifax Wanderers holding the coveted spot just one point above York, and a potentially resurgent Valour FC now just three points behind.

We knew that York needed the win, they’ve never beaten us before. We reminded the players of that, we said if we can’t get the win, we’re going to stick to a very compact 4-4-1 and we’re going to make sure that they don’t win, because this was not a three-point game. That was a six-point game, they’re in the hunt for the playoffs

Cavalry FC’s homestand will continue for the next four games, with the club playing Halifax and Valour once, and Pacific FC twice in that time before closing out the campaign with tantalizing away trip to Forge, who themselves are only three points away from the top with two games in hand.

With York United’s final five matches including an away trip to Pacific before two home matches against Forge, the club will surely need to maximize its point intake against FC Edmonton and Atletico Ottawa ahead of that if Brennan is to reach the postseason stage in his third year at the helm of the club.