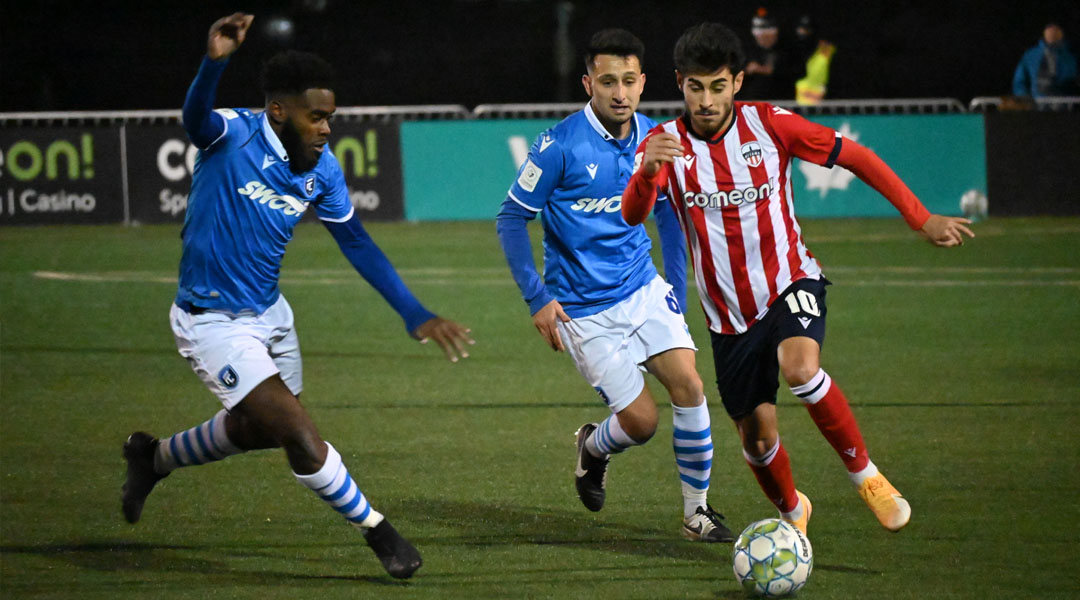 The expansion side saw a brace from Brian Wright and solo goals from Ben McKendry and Alberto Soto see the side rise to a 4-1 lead, with the Eddies rallying late to put in two goals unanswered but ultimately stall out from what would have been the league’s biggest comeback.

Koch’s FC Edmonton side had secured a big home win against Pacific and a draw against Cavalry last week, but dropping points against the only side lower than the Eddies in league standings now sees the team stray two points from the bottom and just one matchday away from potentially being eliminated from playoff contention themselves.

I’m tired of talking about the fighting spirit and character of the group. We know we have the character, we know we’re going to fight. Quite frankly, it was a lack of intelligence at times tonight that got ourselves in a hole. We know we’re going to fight, we know we have resilience, I’m proud of the guys, that’s part of who we are. I don’t think we managed the game very well tonight. We had a good week last week, and took probably two steps forward, and I think tonight was a step back.

A cold night in Alberta had seen the side off to a disastrous start after Fraiser Aird conceded in a penalty in the fifth minute, though bright-spark Tacoma Defiance loanee Azriel Gonzalez would equalize for the Eddies shortly after. Wright would put the visitors back in front before half-time, with McKendry and Soto furthering the lead in a second half that seemed to be on its way to a blowout before FC Edmonton pulled one back through Adam Najem’s first CPL goal, with the side securing a third through a penalty conversion by Aird.

The final minutes of the 4-3 affair saw the Eddies’ pace falter, and they weren’t able to grab an equalizer as a result. For Shamit Shome, it was the team’s lack of discipline and maturity that cost them against Atletico Ottawa on the night.

We showed that in the past couple of games, but we didn’t show it this game. It’s disappointing that we couldn’t keep building, but we know what we did wrong and we have to go back to the drawing board and come out flying in the next game against York for sure.

Atletico Ottawa has been on do-or-die mode ever since its away draw to York United last week, where a loss would have mathematically eliminated the side from playoffs. While the club essentially needs to close out its season chock full of wins to have any chance of a statistically unlikely postseason berth, the side has now recorded one win and one draw under a new back-five system deployed by Mista, though last night’s game wasn’t exactly a defensive masterclass.

The team did will to catch FC Edmonton on counters as they played the ball between lines, converting four of six shots on target. The Eddies fired nine of their twenty-one total shots on target, meaning it was a busy night for former Eddies goalkeeper Dylon Powley.

Mista states that the team is growing more confident under the new formation, but evidently still needs to adapt to the back five as the regular season nears its close.

We need the guys outside to come inside to receive the ball, and I think we did. They closed a lot of space, and we tried to find the spaces between the lines. We had a lot of possession, especially in the second half, and the reason is that we are more comfortable when we defend with three central defenders.

Both of the bottom-table sides will face a tough end to their respective campaigns, with FC Edmonton closing its season out with matches against York United, Pacific FC, Valour FC, and Forge FC, while Atletico Ottawa will face Forge, Valour, York, and a Halifax Wanderers side that has haunted them in the past.