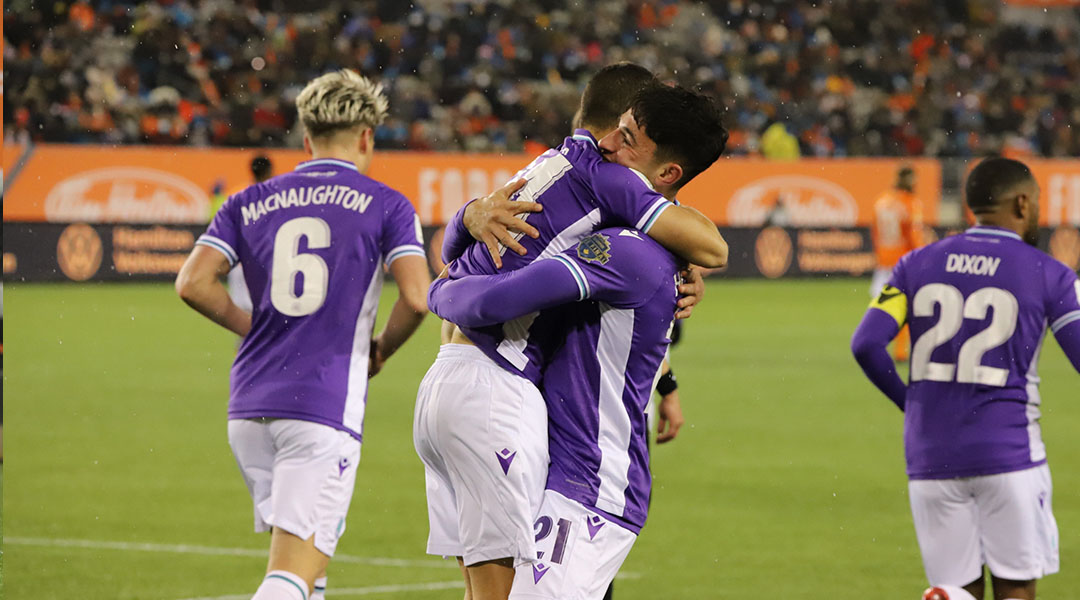 The league’s newest Canadian Premier League champions saw out an 1-0 victory over Forge FC at Tim Hortons Field today, with a goal from U-21 Player Of The Year Nominee Alessandro Hojabrpour leading the side to its first ever CPL title.

The visiting side had a tough first half with Forge claiming the lion’s share of chances, forcing Pacific’s Callum Irving into several fine stops to set the tempo.

The second half seemed to be going the same way before a set piece opportunity for Pacific turned the tide in favour of the isle:

The Tridents sustained plenty of pressure as Forge pressed for an equalizer, with Pacific striking the crossbar on another dangerous counter.

The game’s dying minutes proved quite heated, with Omar Browne earning his marching orders after both players and coaches got into things simultaneously.

At the final whistle, it was Pacific FC who earned the right to celebrate despite Forge dominating the match with 70% possession – a fact which prompted Kah to say the stats aren’t the full picture.

It marks the first coaching trophy for head coach Pa-Modou Kah, who has led the side through back-to-back playoff appearances ahead of the club’s first-ever CPL Final. Given that he reportedly ‘went deep’ in negotiations with FC Dallas, it remains to be seen if the ambitious coach will remain with the Tridents heading into next year.

For now, though, it’s celebration time for those clad in purple.

The west coast side led the league’s scoring charts throughout the season, finishing the regular season with an astounding 47 goals for after 28 matches played. With several domestic athletes perhaps destined for a higher level of play, they’ve always been a title contender that couldn’t be counted out of the race.

The squad has established a reputation for a fluent, fast-paced counter-attacking system that has proven fruitful, with Terran Campbell and Alejandro Diaz scoring the third and fourth-most goals in the league respectively, with eleven and ten apiece. Club talisman Marco Bustos finishes with seven, and that’s despite missing a chunk of the season.

The side also provided an upset in the Canadian Championship, dispatching the Vancouver Whitecaps 4-3 and Cavalry FC 1-0 before being knocked out by Toronto FC in the semi-finals.

With Pacific FC now the reigning champions, the club has earned a berth in the 2022 Concacaf League, where they will become just the second CPL side to enjoy continental action.

Forge FC had been challenging for a three-peat tonight, with the Hamilton-based side having made history as the first CPL side to hoist the North Star Shield in 2019. The shortened Island Games season last year saw Forge reach the final once again, where it completed title defence with a 2-0 win over the Halifax Wanderers.

Forge boss Bobby Smyrniotis will now vie with Kah for the coach of the year award, with both gaffers impressing throughout the season. Smyrniotis did well to retain the core of his squad throughout all three seasons, adding in key loan additions Tristan Borges, Omar Browne, and Josh Navarro this year while some astute scouting allowed new additions like Garven Metusala and Woobens Pacius to flourish.

Kah, meanwhile, has clearly gotten the best out of a young-leaning Pacific FC side, building on his Island Games roster with a priority to continuity. Additions like Manny Aparicio, Kunle Dada-Luke, and Matteo Polisi have impressed, with all of them now collecting gold medals following what has been a historic, stellar season for the Tridents.

While what comes next remains to be seen, one thing is certain: Pacific FC have shown a lot of growth over the last two seasons, and their first-ever CPL title win will ring in as deserved. Whether they can defend the title like Forge did in 2020 remains to be seen, however, with the Canadian Premier League’s fourth season set to be anything but predictable.