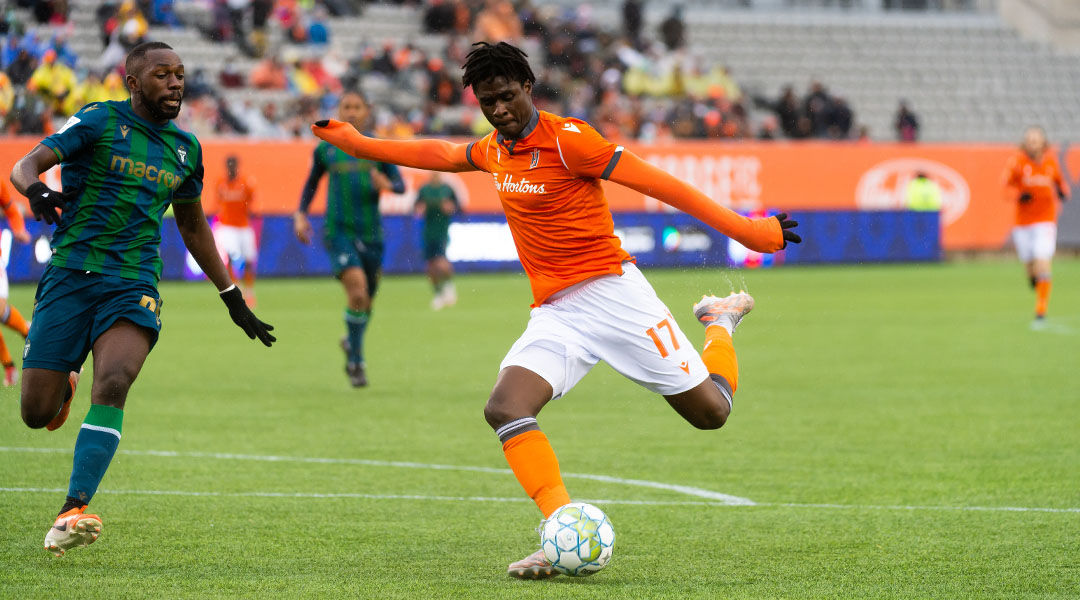 For the third consecutive year, Forge FC has risen to the occasion to secure its spot in the CPL Final.

The reigning Canadian Premier League champions hosted the first ever playoff-based 905 Derby against York United today, with a rowdy home crowd at Tim Hortons Field witnessing a 3-1 win for the home team.

As a result, the hammers will now host Pacific FC for the 2021 CPL Final on December 5.

Forge certainly started on the front foot, with the favourites taking an early lead after a driving run from Borges saw Woobens Pacius crack a tight-angled shot in off the post:

The home team kept the pressure coming in the first half, utilizing both wings well and putting the York United defence under plenty of pressure.

Against the odds, York United carved a way back into the match through a moment of magic from Michael Petrasso, who took advantage of a failed clearance to loop in an equalizer near the end of the first half:

The second half saw Petrasso go down injured six minutes in, with Ijah Halley replacing the goalscorer. A more back-and-forth affair followed, with both sides exchanging chances as the rainsoaked turf pitch saw defensive errors mount.

The reigning champions broke through in the 65th minute through a powerful run from Browne, who procured a tight pass which tooka deflection off Jordan Wilson. It bounced fortuitously to Costa Rican forward Josh Navarro, with the forward spinning around to blast home the go-ahead goal from close range.

Things went from bad to worse for the Nine Stripes as the second half progressed, with a corner kick from the hammers seeing a header from Navarro bounce off of Noah Verhoeven to give the home side further breathing room.

While the Nine Stripes nearly bagged one back through Diyaeddine Abzi four minutes from time, the hammer maintained the status quo throughout the rest of the rainy night at Tim Hortons Field. With the final whistle sounding, Forge officially advance to the 2021 CPL Final with a comfortable 3-1 win over its 905 rivals.

With Forge FC having been the highest-seeded team in playoffs after finishing first in the regular season, the Hamilton-based side has won the right to host the 2021 CPL Final against Pacific FC. Due to the Hamilton Ti-Cats hosting a CFL eastern semi-final at Tim Hortons Field next week, however, the third-ever CPL Final will instead be shifted to Sunday, December 5.

Bobby Smyrniotis has surpassed expectations with the Hamilton-based side at every opportunity, hoisting a North Star Shield in both 2019 and 2020. This year sees the team progress to its third straight final after securing Champions League qualification and coming one penalty away from reaching the Canadian Championship Final, too.

See Also: 2020 Canadian Championship Final May Be Played As Late As July 2022

The 2021 CPL Final will be the latest closing match in the young league’s history, with the second leg of the 2019 CPL Final coming on November 2, 2019. Prior to this year’s final, Forge will keep in action with two Concacaf League semi-final legs against FC Motagua.