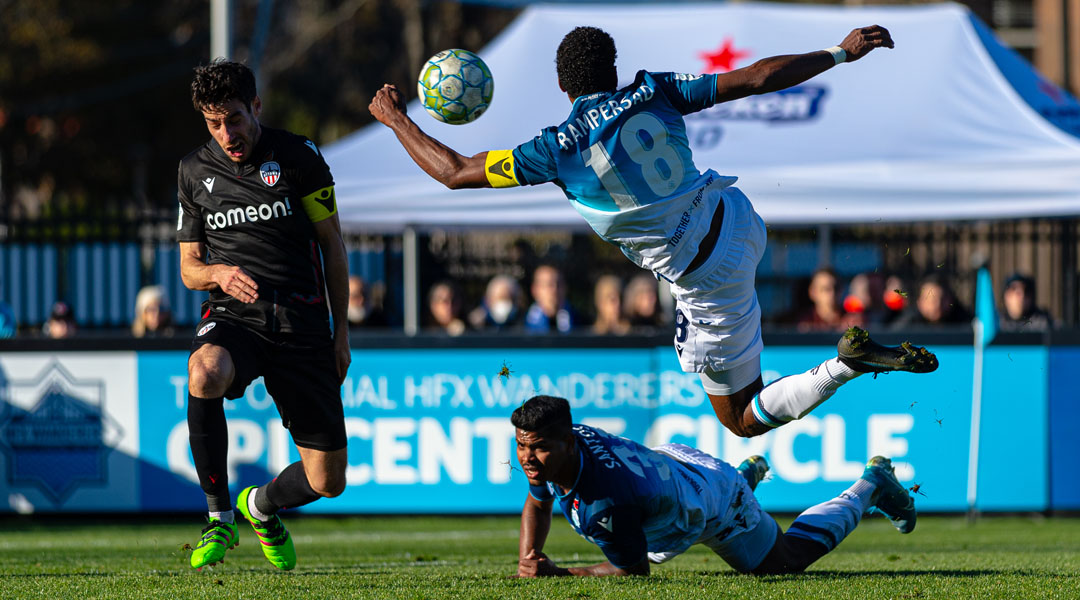 Former Nine Stripe Matthew Arnone has inadvertently clinched a playoff spot for his former side.

The 27-year-old defender scored the equalizer for Atletico Ottawa against the Halifax Wanderers today, earning a harsh second yellow (and a sending off) for his celebration afterwards. With the Wanderers unable to capitalize on its man advantage, however, the club’s failure to get three points now sees York United grab the fourth and final playoff spot.

There will be also be questions on why a fully-fit Morey Doner was excluded from the lineup during a must-win match for the east coast home team, who certainly entered today’s match as favourites to win.

Related: Expanded Playoffs Are A Clear Winner For CPL

The Nine Stripes had spent the majority of the season just outside of a top four position, but were handed a golden opportunity to storm back into it following a scoreless string of games from the Halifax Wanderers while dark horse Valour FC fell just short of a stellar comeback attempt yesterday.

With the club having undergone a massive rebuild that saw the Nine Stripes emerge as the youngest team in the league, many had felt that the side wouldn’t be playoff contenders. Instead, players like Lowell Wright, Max Ferrari, and Isaiah Johnston have excelled, with the latter two recently earning multi-year contract extensions from the side.

With Diyaeddine Abzi cementing himself as a star-caliber CPL player, Nathan Ingham back in his 2019 form, and quiet consistency coming from the likes of Noah Verhoven and Dominick Zator, the side will now hope to provide a similar shock in the CPL postseason.

The club also did well to overcome massive difficulties with its international signings, three of whom never ultimately got to enter the country this year. The Nine Stripes also saw Felix N’sa and Ryan Lindsay unable to participate in the season through injury, with the latter stepping away from the professional game to focus on a medical issue.

York United rallied quickly to secure replacements, with Jordan Wilson firmly establishing himself into a centre-back role as team captain Roger Thompson came in-and-out with injuries. Far from being a one-man show, the club has procured goals from thirteen different players this season, with Alvaro Rivero and Diyaeddine Abzi and leading the way with six.

Things came down to the wire as York found itself to be the draw kings of the campaign, with the CPL side having collected a league-record twelve draws throughout the season so far. With the side now set to travel exclusively as the away team in do-or-die playoff matches, it’ll need to find extra imperative to lock down results in ninety minutes or less: there are no draws in playoffs.

Last season’s Island Games campaign saw the club’s inability to turn draws into wins haunt them, with the club being eliminated from playoff contention (similarly by watching Powley through the television, no less) despite having drawn the majority of its matches in PEI. In the 2019 season, Jim Brennan’s side finished third overall, and thusly missed out on the inaugural CPL Finals.

Perhaps overlooked by other sides in the league, York’s goals scored and goals conceded puts the side right in line with the likes of Cavalry, showing that the Ontario-based club ought not to be overlooked in playoffs. With Jim Brennan backing his side as a confident young team with a will to win, it’ll be interesting to see what happens next.

Overall, it was a tough string of results in October that allowed Halifax to wander right out of a playoff spot at the bitter end.

The Halifax Wanderers had enjoyed a strong home turnout following the club’s long-awaited return home, with blistering form from Brazilian forward Joao Morelli seeing the 25-year-old well on track to collect the golden boot. With the forward having provided over half of Halifax’s goals, however, his absence through injury last month was certainly felt at a critical time.

In fact, the club failed to score a single goal in the four matches Morelli missed, with their last win from October 11 coming courtesy of an 82nd minute own-goal from Pacific’s Abdou Samake.

The east coast team needed a win over second-last side Atletico Ottawa today, with a first half tap-in from Samuel Salter seeing the club in a comfortable lead. The second half was anything but, however, with Matthew Arnone firing in an equalizer following some slippery hands from Keiran Baskett.

The club had looked like a fiery playoff contender throughout most of the campaign, with new additions like Morey Doner, Jeremy Gagnon-Lapare, and astute draft pick Stefan Karajovanovic looking lively for the side, among others. On the flip side, 2020 Golden Boot winner Akeem Garcia has only bagged 2 goals in 22 appearances this season, putting further worry on the club’s over-reliance of Joao Morelli.

The previous season had seen Hart lead the Halifax Wanderers all the way to the CPL Final at The Island Games, where the side fell to a 2-0 loss to Hamilton’s Forge FC. This was off the back of a significant squad rebuild after the side had finished last in the inaugural campaign.

With the Halifax Wanderers having concluded their season today, the final four are now set: Forge FC, Cavalry FC, and Pacific FC continue their streaks of locking in postseason spots, with York United earning its first-ever voyage beyond the regular season.

The 2021 Canadian Premier League playoffs will take place from November 20-21, with the winners of both ‘semi-final’ matches progressing to the single leg final that will take place one week later. For Halifax, however, the season now comes to a close.

Eddies Hang On To Eliminate Valour From Playoff Contention