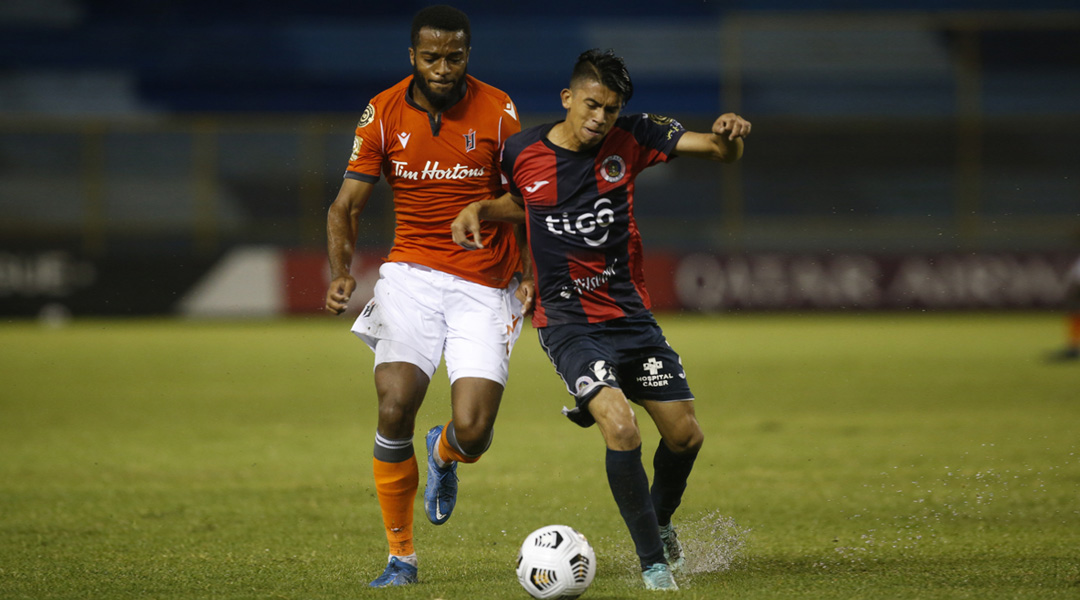 Reigning Canadian Premier League champions Forge FC are through to the Concacaf League Round of 16 after defeating Salvadoran side CD FAS 5-3 on aggregate.

The Hamilton-based club had recorded a 3-1 victory for its in-name-only home leg last week, which took place in El Salvador due to travel restrictions in Canada. While Forge were bolstered by the return of Kyle Bekker and head coach Bobby Smyrniotis from suspension, the second leg proved to be a more dramatic affair.

With CD FAS buoyed by fans in the stands and a thumping horn section in Estadio Cuscatlan, the Salvadoran side got off to a hot start after midfielder Kevin Reyes procured a tiny finish just twelve minutes into the match after he collected the ball and found space to shoot between Metusala and Achinioti-Jonsson:

The fifteenth minute saw the stadium lights power down as the ball went out of touch, with a severe thunderstorm rolling over the stadium over the next few minutes as fans and players alike ran for cover. The result was over an hour of waiting as officials ensured the thunder was long-gone before resuming play. The pitch, however, would be hosting to quite a bit of water for the remainder of the match.

The resumption of play saw Forge fight back with a little more prowess than the Canadian side had shown in the first fifteen minutes, but it wasn’t until the start of the second that Forge’s Joshua Navarro found an equalizer at the end of a sharp run and cross from Jonathan Grant:

That 4-2 aggregate scoreline didn’t last for long, with The Tigres retaking the lead just seven minutes later through a stellar freekick from 27-year-old midfielder Wilma Torres. CD FAS now led the match 2-1, with Forge leading the series 4-3 on aggregate.

Responding well to the pressure, the hammers took advantage of a counter-attacking opportunity just five minutes later that saw Grant play the ball out wide to Navarro, who coolly fired in a looping cross aimed towards the end of Grant’s run. The 27-year-old met the ball well, firing a close-range header into the net and tying the game up 2-2, with Forge now up 5-3 on aggregate.

While CD FAS attempted to claw another goal back, Forge was able to keep a firm grip on the match and dictate a slower tempo that saw the match refrain from any further goals: after ninety minutes, it was the Canadian Premier League side moving on.

Forge FC has won all of its Concacaf League preliminary round matchups since entering the competition as a newly-minted side three years ago, with the hammers beating Antigua at this stage in 2019 and Municipal Limeno in 2020. Bobby Smyrniotis has seen his side continually impress in the continental competition, reaching the Round of 16 in its first year and the quarter-finals in its second.

As returning captain Kyle Bekker puts it, the team is eager to achieve Champions League heights through the competition, though things only get harder from here.

The club will now face a tough test against Panamanian side Independiente next month. It’s a team that may sound familiar to Canadian fans, as they once trounced Toronto FC 5-1 in the Champions League, and it’s the team that Forge was supposed to receive Omar Browne on loan from this season.

Forge’s Concacaf League Round of 16 matchup is set to have its first leg on September 21, one week after the side features in a Canadian Championship quarter-final. It remains to be seen whether the hammer will be able to play at home for that first leg.

Forge FC will now return to Canada and will host the Halifax Wanderers at Tim Hortons Field this Sunday.