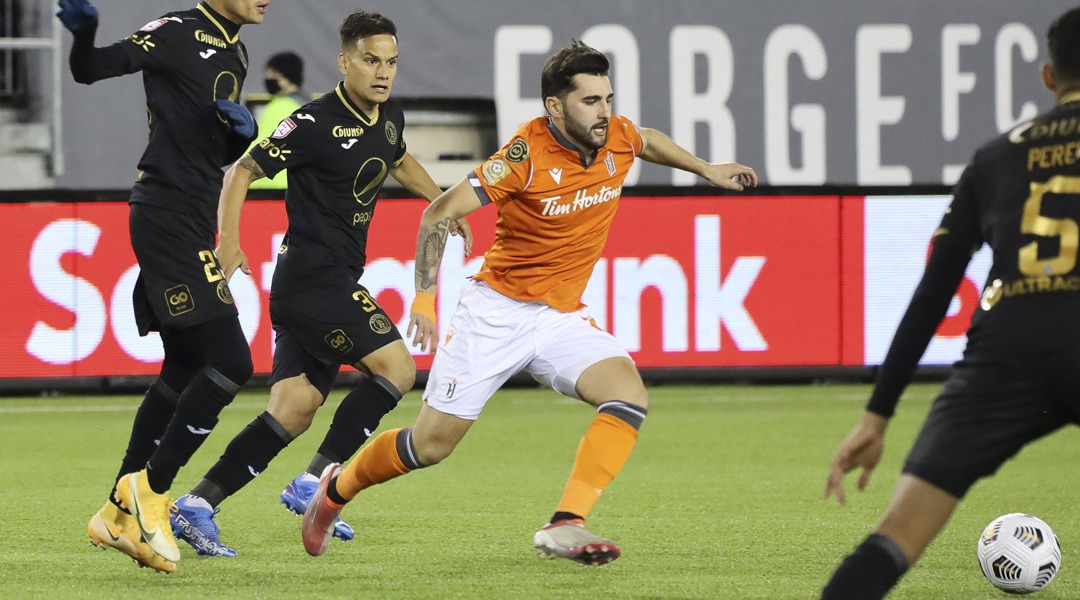 Forge FC struck twice in the final ten minutes to rescue a draw against Honduran visitors FC Motagua in the first leg of the Concacaf League semi-final.

The hammers had fallen two goals behind a Honduran side that appeared to be coasting to victory, with late strikes from Josh Navarro and Kwame Awuah providing a rapturous scene for home fans at the final whistle. That being said, there will be concern that Daniel Krutzen may have picked up an injury that might see his season come to an early close.

The first half saw both sides exchange chances, with the reigning CPL champions perhaps getting the better of the passing sequences despite FC Motagua edging possession. While some trademark Concacaf gamesmanship broke up play with referee whistles, Forge were playing a confident game for its first-ever semi-final appearance in the continental competition.

The tail end of the first half give rise to a worrying sight as Daniel Krutzen landed awkwardly, clutching his right leg afterwards. While he tried to push on after a brief moment on the sideline, Krutzen went down again not long afterwards and had to be helped off the pitch, prompting significant concerns about a potential season-ending injury.

Things went from bad to worse for the hammers while they waited for Molham Babouli to get subbed into the match, with FC Motagua pushing hard during its short man advantage. The visitors put in a good header redirection across the box that escaped from Kwame Awuah, with Kevin Lopez taking a touch to steady himself before burying a close-range chance to give the side a crucial away goal:

Molham Babouli – who has three goals in four Concacaf League appearances this season – nearly levelled things to close out the first half, firing a curled effort wide of the post. At the half-time whistle, however, it was the visitors with the advantage.

Forge came out strong to open the second half, and really should have equalized after Tristan Borges slotted in a beautiful ground cross to Josh Navarro. The celebrations weren’t to be, however, with the Costa Rican forward striking the post from close range instead.

Forge were made to rue the missed chance after the visitors bagged a second through a long distance set piece that saw an aerial ball slip past Kyle Bekker, with Marcelo Peirera powering a header just beyond the grip of Forge goalkeeper Triston Henry to secure the club’s second away goal of the night:

The hammers put bodies forward in a bid to pull one back, and were fortunate not to concede fifteen minutes from time after a two-on-one counter for FC Motagua fall short when Marco Vega miss-touched the ball. Triston Henry then came up big five minutes later, making a fine stop to keep the match from getting truly out of control – though a failed out-of-his box clearance from him nearly handed a third for the visitors not long after.

Josh Navarro would make amends for his earlier miss by pulling one back for the hosts with seven minutes to go, delivering a header on a set piece opportunity that found its away through to the far side of the net.

This marks his second goal at Tim Hortons Field this week, with the forward having contributed to a 3-1 playoff win over York United just three days ago.

Forge midfielder Kwame Awuah then sent the home fans into raptures with a last-gasp equalizer, pouncing on a spilled rebound from the keeper to ensure a much quieter flight back home for FC Motagua.

While Forge FC did well to rescue a draw at the last gasp, the side still has a lot to do away to Honduras: the away goals rule means that the side has to find the back of the net next week, and they’ll have to do it without Elimane Cisse given his suspension through yellow card accumulation. It looks likely that Krutzen could be a miss through injury, too.

Forge FC will play the away leg against FC Motagua on Wednesday before returning to leg action for the 2021 CPL Final on December 5.