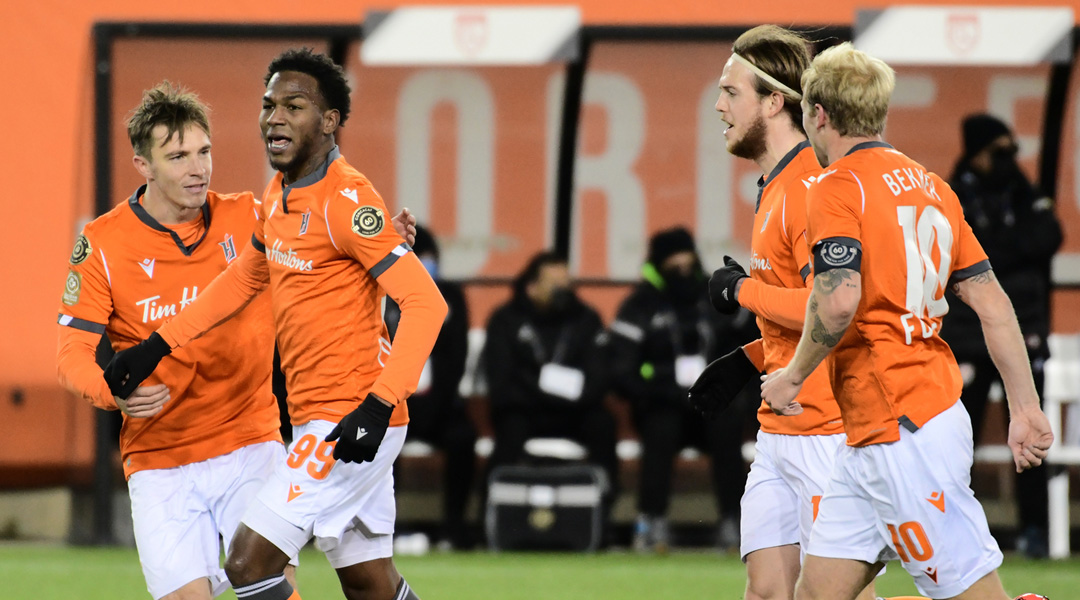 A crowd of 4,162 fans took in an entertaining and historic Concacaf League affair at Tim Hortons Field tonight, with Forge surpassing expectations to record a 3-0 win that sees the side advance to the semi-final stage of the continental competition.

The result also means that Forge has qualified for the Concacaf Champions League, becoming the first CPL side to do so.

The hammers stepped onto the field at Tim Hortons Field knowing that it needed a big turnaround win in front of a home crowd, with the reigning CPL champions having lost the first leg by a scoreline of 3-1.

Both sides fielded very similar lineups to that leg, with Bobby Smyrniotis replacing Dominic Samuel with Haiti-tapped defender Garven Metusala, and Santos naming one replacement with Michael Umana stepping in for Michael Barquero.

It was a breathless start for the Santos defense, with Forge probing early and perhaps being unlucky not to score in the sixteenth minute after a sequence of play saw three desperate blocks keep Forge out of the net, with Cisse and Welshman unlucky to see their efforts stopped.

The hammers nearly struck again minutes later, with Awuah sending in a sharp cross to Tristan Borges, with the midfielder taking a quick touch to launch a strike that went just over the crossbar.

The moment of magic for Forge came in some fashion, with the hammers building up play with a sharp dummied pass from Babouli that allowed Omar Browne to fire an absolute right-footed rocket that went bar-down to bring the hosts up 1-0:

The visitors looked likely to equalize not long after, with Osvaldo Rodriguez sending in a beautiful pass to free Javon East, with Cisse coming to the rescue with a big block on the lone Jamaican forward.

Alexander Achinioti-Jonsson would pick up a yellow near the end of the first half, meaning he’ll miss the club’s semi-final. The scoreline remained unchanged throughout the first half, with a Forge squad buoyed by a home crowd looking the better team.

Still, the visitors came inches from an equalizer to open the second half, nearly capitalizing on a mistake from Garven Metusala to sneak in a long-range shot in the fiftieth minute.

Forge nearly procured a series equalizer after Welshman did well to keep possession on the turn in the sixtieth minute, but his pass went just behind the run of Kyle Bekker with Babouli sending the follow-up effort high.

The former Toronto FC striker would get it right on his next opportunity, however, perfectly volleying home a right-footed ball into the back of the net after a pinpoint cross from Omar Browne that snuck in behind the run of the Santos defenders:

The goal sent Tim Hortons Field into raptures, with the crowd knowing that a 2-0 scoreline would catapult the side into the semi-finals this year and the Champions League next year.

Luis Paradela could (and maybe should) have silenced the crowd in the 73rd minute, firing a close range effort will high in a moment the Cuban international will want back.

Forge head coach Bobby Smyrniotis – who had called this the biggest match of Forge’s history – then made some defensive adjustments, bringing on Maxim Tissot for Tristan Borges as David Choiniere replaced Omar Browne.

The substitution would pay immediately, with Welshman trouncing down the right flank to send in a cross that Navarro was able to finish from close range.

Santos was unable to get themselves on the scoresheet in the game’s closing minutes, which would have forced a penalty shootout – something which Forge already did earlier this week. Instead, the hammers came out straight 4-3 victors on aggregate.

The result marks a significant milestone in Canadian football history, with Forge’s advancement to the semi-final stage of the Concacaf League also meaning that the club becomes the first Canadian Premier League side to qualify for the Champions League.

With the club having also qualified for its domestic league playoffs with five games left to play, it’s going to be a busy November for the back-to-back CPL champions.

The hammers’ previous two stints in the Concacaf League saw the team exit in the quarter-final stage and round of 16, respectively.