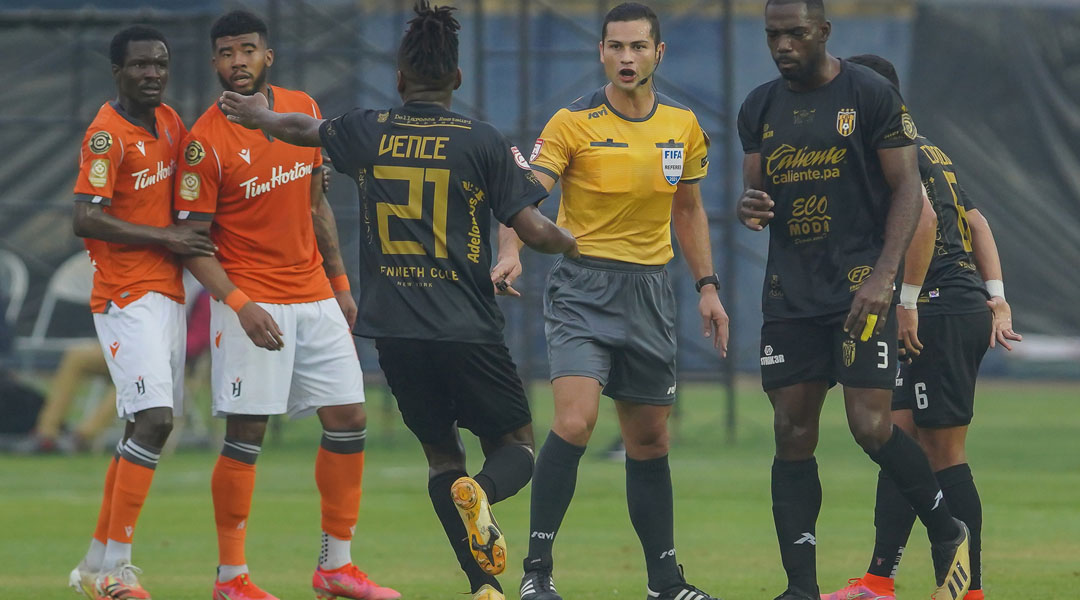 Reigning Canadian Premier League champions Forge FC continue to be a force to be reckoned with in Concacaf League action, securing passage to the quarter finals with an 0-2 aggregate win over Independiente de La Chorrera in the Round of 16.

If that name sounds familiar, that’s because Independiente had knocked Toronto FC out of the 2019 Concacaf Champions League 5-1 on aggregate, with tonight’s action seeing Forge FC reduced to ten men against the Panamanian side but ultimately lifted to victory by two former TFC players.

The Hamilton-based side had flown into Panama City knowing a win was well within reach, especially given that away goals would be taken into account for the two-legged Concacaf League tie.

The home leg of the matchup saw Forge FC miss a penalty opportunity in a nil-nil draw, with Panamanian forward Omar Browne cleared to play for Forge against his parent club in the second leg.

The Hamilton-based side had surpassed CD FAS in the preliminary round to reach this stage of the competition, the third time it had done so.

Buoyed early on by a home field advantage, Independiente didn’t take long to ask questions: Rouse put forth a dangerous-looking header that struck the near-post just beyond an acrobatic dive from Triston Henry, with the ball rebounding at a tight angle before being cleared by Krutzen.

Independiente would strike the woodwork a second time in the game’s opening minutes, with a tenth minute freekick thumping against the post before an unmarked Rouse slotted in the rebound – albeit, from an offside position.

After being peppered by shots throughout the first half, Forge then struck against on the run of play in the 27th minute by way of a corner that saw Alexander Achinioti-Jonsson head the ball into the middle for Molham Babouli to nod home, giving the hammers a crucial away goal at Estadio Rod Carew:

A shock red card decision then saw Babouli given a red for what OneSoccer’s Adam Jenkins hailed as one of the worst Concacaf-related calls he’s ever witnessed, with CAI midfielder Abdiel Macea making the most of a near non-contact altercation between the duo at the stroke of half-time.

While it remains to be seen if there was any verbal altercation not picked up by the broadcast, the above red card certainly seems like quite a bold decision by referee Keylor Herrera.

The second half would see Canadian fans believing some kind of poetic justice was in play, with Forge captain Kyle Bekker striking a wonderful freekick in the 54 minute to put the visiting team two goals ahead in Panama:

In a discussion with Northern Tribune ahead of the 2021 CPL season, Bekker put forth a firm belief that his side could reach Champions League heights, with the hammers now one match closer to qualifying for such by way of the Concacaf League.

The 63rd minute would see Forge loanee Omar Browne come on against his parent club, with the 27-year-old replacing Guyanese international Emery Welshman. With Smyrniotis shifting gears to keep men behind the ball, he would find himself isolated up top for the second half.

Independiente – now needing three goals to secure a result – kept pushing forward, with the Forge FC defense holding firm to limit opportunities within the box for the home side, though Henry was called into action for a few tame shots.

The final whistle from Herrera would confirm a big victory for the hammers, who advance to the 2021 Concacaf League quarter-finals after defeating Independiente de La Chorrera two goals to none on aggregate.

Their next opponent in the continental cup is still to be determined.

It’ll be a busy fall season for the reigning CPL champions, who look destined for a postseason berth in league play, have a semi-final in the Canadian Championship against CF Montreal, and will now continue in Concacaf League action in late October and early November.

It is expected their belated 2020 Canadian Championship Final against TFC will be delayed to 2022.

As per Concacaf regulations, it appears that Forge FC will be unable to appeal Babouli’s suspension, meaning that the striker will be suspended for the two-legged quarter-final.

The three-year-old club has a good track record in the continental competition, reaching the quarter-finals last year and the Round of 16 in its first year of existence.