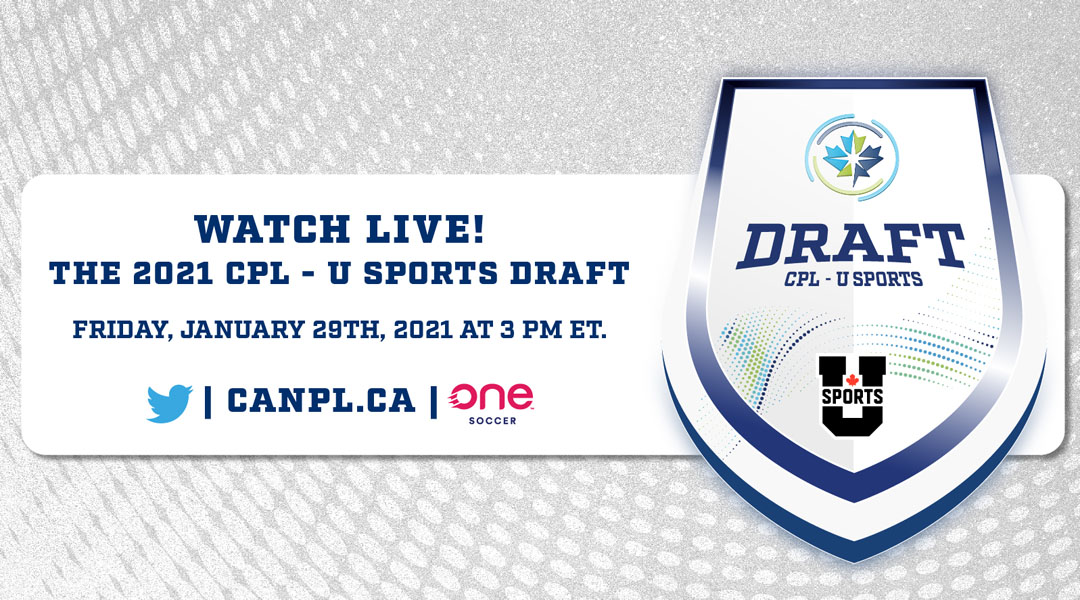 The Canadian Premier League has just announced the date for the digital-only 2021 CPL-U SPORTS Draft, which will take place next Friday and will feature all eight CPL teams across two rounds.

While the actual draft will take place behind closed doors, the club selections will be revealed in chronological selection order on Friday, January 29, 2021 at 3:00PM EST through OneSoccer, the official league website, and the league’s Twitter channel.

Similar to last year, the 2021 CPL-U SPORTS Draft will consist of two rounds, though this marks the first time expansion side Atletico Ottawa will be participating in the student-focused talent selection.

The draft will go in a snake draft format, which means the worst-performing four teams of the regular league table from The Island Games will go first, then the two bottom teams in the group stage, then the runner-up, and then last year’s winner. Then, the opposite will roll out for the second round of selection as shown in graphic below:

Players selected in the draft aren’t guaranteed a contract, but rather will have the opportunity to trial with the side that selects them in the hopes of picking up a U SPORTS Player Contract (previously referred to as a developmental contract), which allows them to retain U SPORTS eligibility for any subsequent year of U SPORTS action.

International players selected through this system will not occupy an international roster spot should they sign a U SPORTS Player Contract with a CPL team following the draft.

As per CanPL Digital Content Editor Marty Thompson, this year’s draft also introduces a new rule that allows clubs to retain players on developmental contracts signed through the draft in subsequent years, so that clubs don’t need to pick them more than once in subsequent draft years. Cavalry FC did this with Gabriel Bitar.

As such, the Halifax Wanderers have retained Jake Ruby, while Forge FC has retained Gabriel Balbinotti. The rule update may entice CPL sides to take a gamble on younger athletes earlier on in their U SPORTS careers, which could see some younger faces get an opportunity at the CPL level.

The CPL’s Football Development Department has been acquiring input from U SPORTS coaches from coast-to-coast in order to build a prospects list for all eight CPL coaches to take a look at through a digital medium, with statistics, player profiles, and video footage helping them make their choices.

For each turn, each team will have three minutes to make a selection, and are permitted one three-minute timeout during their turn that must be followed immediately by a player selection. There will be a ten minute break between the first and second round of draft picks.

The 2019 CPL-U SPORTS Draft saw only two players from each round ultimately sign on with their respective sides, with top pick Cory Bent being the highlight of the bunch.

That was a stark decline in successful picks from the inaugural draft, which ultimately brought 13 players into the league for the inaugural season, though unlike the following drafts it allowed for players in their final year of U SPORTS action to be included.

The inaugural draft saw second round draft pick Joel Waterman sign on for a professional contract with Cavalry FC ahead before his national team call up and transfer to CF Montreal, while Eddies top goalscorer Easton Ongaro was picked by Cavalry FC but ultimately signed for their Al Classico rivals instead.

Interested fans will be able to tune in live next Friday through both Canadian Premier League and OneSoccer media channels.