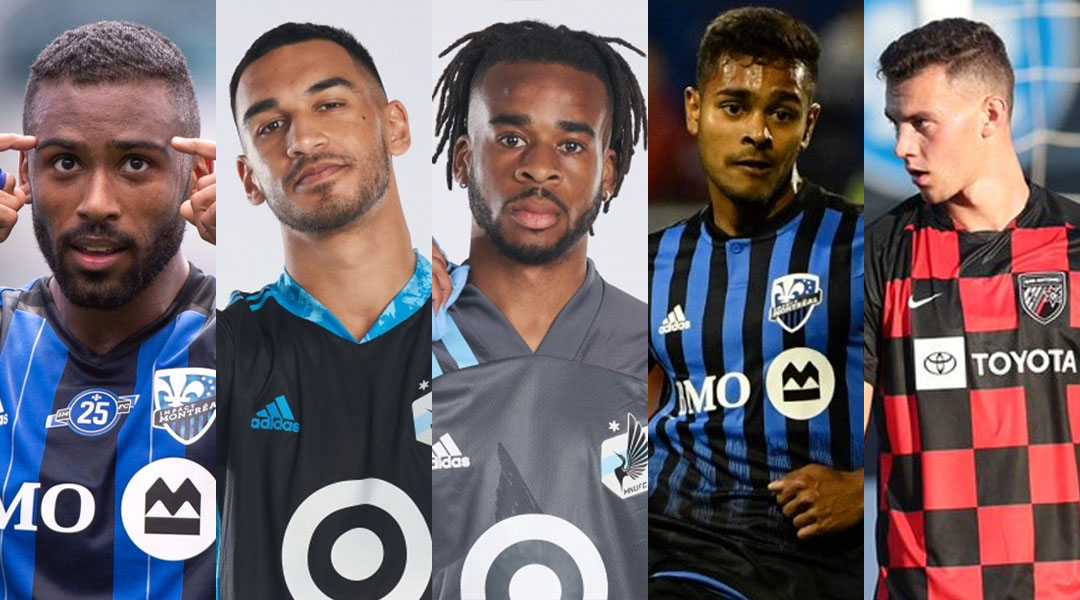 With Major League Soccer clubs now providing end-of-season roster updates, there’s been a handful of Canadian talent who have found themselves either out-of-contract or released by their respective MLS sides.

There’s no doubt that Canadian Premier League clubs are reaching out to them, so we wanted to take a look at five Canadian MLS athletes who we could see playing in the domestic league next year. It’s not an exercise without merit, with our predictive list of ten MLS athletes from last year seeing five of them go through.

Without further ado, here’s five Canadian Major League Soccer athletes who would be a good fit in the Canadian Premier League after finding themselves on the outs at the MLS level:

The six-foot-three centre-back found himself drafted by FC Dallas last year after an impressive college campaign where he was named Conference USA Defender of the Year and a First Team All-American. He appeared regularly for USL League One side North Texas on loan from FC Dallas, and this year proved a danger on set pieces with two goals in nine appearances for USL Championship side San Antonio FC.

His good form saw the Nanaimo-born defender added to the provisional Canada Olympic Qualifying roster, but FC Dallas opted to move on without the promising youngster. Given that MLS Analyst Matthew Doyle predicted he could crack the 2022 World Cup roster for Canada, it’s clear many believe that he has still plenty of room to grow.

With Montgomery having lived in Victoria as a teenager, it’d be easy to envision Pacific FC putting in an offer. The club had some defensive issues last year that Montgomery could clearly help with, and it looks like the west coast side already took a try at another centre-back in Roger Thompson. Still, it wouldn’t be surprising to see him continue in the United States, either.

Shamit Shome
After four years and fifty-two appearances with the Montreal Impact, Alberta-born midfielder Shamit Shome has returned home to Edmonton after having his option declined by the MLS side.

Given that Shome made 26 appearances for FC Edmonton in during its NASL days in 2016, Eddies fans will be hoping that new head coach Alan Koch has pitched an offer to the local youngster. At just 23 years of age, Shome has a lot of room to grow and is already a talent one could see impressing at the CPL level.

The Voyageurs Cup winner squared off against CPL competition in the domestic cup last year, appearing in both legs against York9 FC (now York United) and the away match against Cavalry FC before playing every single possible minute across both legs of the Canadian Championship Final, which the Impact won via penalty shootout.

The talented youngster also completed his engineering degree while playing in Quebec, which means that Shome could hang up his boots to pursue more higher-paying opportunities than Canadian Premier League clubs could hope to offer.

Anthony Jackson-Hamel
Anthony Jackson-Hamel’s time with the Impact has come to a close after seven years that had a good mixture of highs and lows: some brief prolific form has found itself surrounded by long dry spells, with the Quebec City product ending his last campaign in black-and-blue on the outs under Thierry Henry. He racked up just 278 minutes of action this year prior to the club declining his option.

The six-foot-one striker is a product of the MLS side’s academy, and it’s easy to envision the Canadian striker finding his footing again against CPL opposition. In fact, he’s already done it: he featured in the club’s away Voyageurs Cup matchup against Cavalry FC at Spruce Meadows, scoring the only goal of the match.

While some Impact players who moved to the CPL like Jason Beaulieu and Daniel Kinumbe had low-end MLS salaries, last year saw Anthony Jackson-Hamel bring in a hefty $160,000. If the 27-year-old is going to transition to his country’s domestic league, the biggest barrier to entry is definitely if he’s willing to take a paycut.

Raheem Edwards
Former Toronto FC Academy product Raheem Edwards has been a bit of an MLS journeyman over the last three seasons, making double-digit appearances for the Montreal Impact, Chicago Fire, and Minnesota United. Still, with the winger having MLS experience playing on both the left and the right flank, he’d be a tantalizing prospect for any CPL side who could offer the Canadian some stability.

Raheem found himself used sparsely as a late game substitute throughout the MLS Is Back tournament, and that trend continued as he collected minutes in small batches throughout the regular season this year until losing favour at the tail end the season and missing out on playoff selection entirely. Now out-of-contract and occupying an international roster spot at Minnesota United, Edwards certainly looks more likely to be moving on than staying.

Of course, with Edwards coming off of a $70,250 USD salary, he’d need to take a paycut if the CPL beckons – but if he’s hungry for regular playtime, perhaps a move away from MLS is best for the former TFC man. Given his comments regarding last year’s CPL Final, it’s clear that he has kept an eye on the league, and MLS players on similar salaries have made the jump before.

Greg Ranjitsingh
Watch out, Forge FC fans: Ranjitsingh has Sigma FC connections, and the Hamilton-based club will likely be picking up more experienced goalkeeping competition for Triston Henry next year.

The Scarborough-born Trinidad and Tobago international found himself surplus to requirements at the MLS level, but Greg clearly has what it takes to play professionally: he won two back-to-back USL Championship titles with Louisville City, having made some 83 professional appearances (5 at the MLS level) during his career so far.

Given that Ranjitsingh collected his US Green card, the former Minnesota United man is likely a big target for clubs stateside: Despite going largely underutilized by both Orlando City and Minnesota United following his aforementioned successful stint with Louisville City, it’s easy to imagine plenty of USL clubs taking a look at the 27-year-old.

David Norman Jr .
Having already undergone a month-long loan to Pacific FC, it’s easy to see free agent David Norman Jr. returning to the Canadian Premier League after failing to make an appearance for MLS expansion side Inter Miami, with the club opting to decline its option for the 22-year-old Vancouver native earlier this month.

The six-foot-two midfielder had been hopeful for a fresh start in Miami following frustration with the Vancouver Whitecaps, but the British Columbia-born athlete has found chances hard to carve out at the MLS level. Having made eight appearances for Pacific FC in his brief time with the club, perhaps the Canadian Premier League will be the best proving ground for him.

Norman Jr. had been named to the provisional Canada Olympic Qualifying roster, but if he wants to continue his international ambitions it’s fair to say he’ll need to be playing regular club football to keep sharp. With plenty of Canadian Premier League clubs still fleshing out their rosters, it’d be easy to see Canada-and-UK dual national return to the domestic league in the near future.

Whatever the next steps for the aforementioned athletes ends up being, one only hopes that the Canadian talents land on their feet. While the Canadian Premier League aims to provide a new layer of protection for local talent, it’s not the only option – in short, there’s no telling what will ultimately unfold in what often proves to be an unpredictable offseason.

While Cavalry FC, Halifax Wanderers FC, Pacific FC, Valour FC, and York United have provided a fair chunk of roster updates, FC Edmonton has just begun rebuilding its roster rebuild while Atletico Ottawa and Forge FC have yet to announce any roster moves at all. All-told, there’s a lot of transfer news left for Canadian Premier League fans to take in, and they should certainly keep a close eye on the above five players.