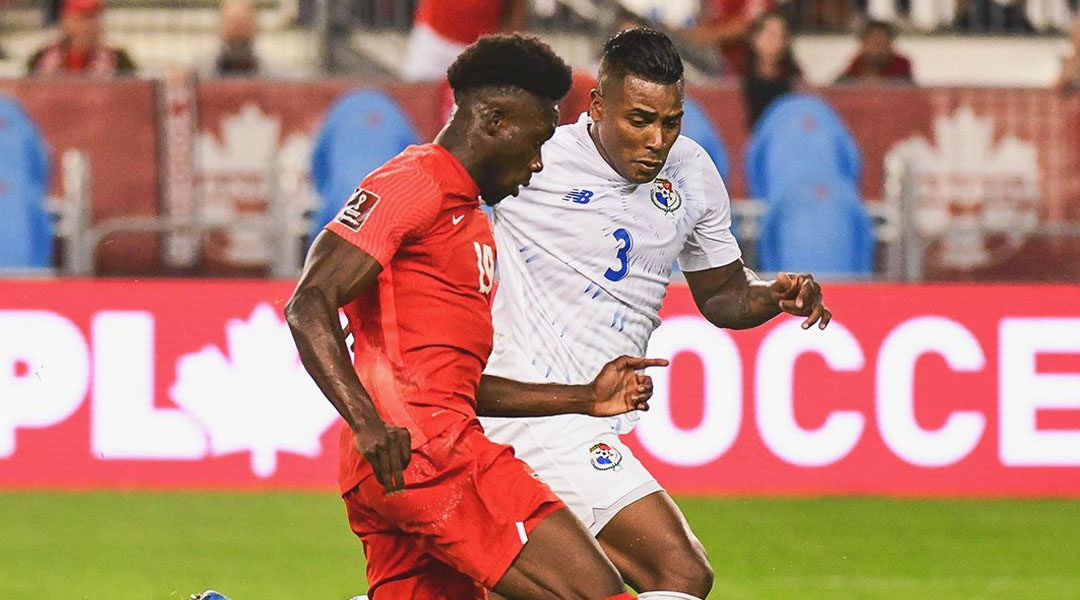 Canadian head coach John Herdman had described tonight’s home match against Panama as a must-win, and his team duly delivered a 4-1 victory against the visitors that saw Les Rouges put in wave after wave of lethal-looking attack.

The Canadian national team now has a record of two wins and four draws from six matches played, recording a win over El Salvador and draws against Honduras, USA, Mexico, and Jamaica.

Canada now rests third in the group, just one point behind group favourites USA and Mexico. It has outscored both of those other countries thus far.

Canada opened strongly tonight against the Panamanian visitors, finding itself on the frontfoot early as it began to probe through multiple attacks. Panama struck first blood against the run of play, however, catching Les Rouges on a high press to counter with Rolando Blackburn providing a cool, forceful finish that extinguished the early match noise at BMO Field.

The crowd would build up its volume again as Canada nearly bagged a quick equalizer as Alphonso Davies collected an errant pass from the opposition to slot in a through ball to David, who likely should have shot once through on the goalkeeper but instead opted to pass and saw the opportunity go begging.

Canada continued to attack in effervescent waves as Alphonso Davies grabbed the game by the collar, with the Bayern Munich man playing Jonathan David in during the fifteenth minute to force a big stop from the goalkeeper.

Davies was everywhere on the pitch, putting his body on the line to make interceptions and catch Panama on the counter. It’s no surprise that he was dancing around the box before setting up a play that saw Eustaquio go down for a penalty shout. He also forced a big stop from goalkeeper Luis Mejia himself, too.

Canada’s dominance saw the side start collecting corners, and one eventually made a difference after a ball whipped in by Davies flew in an inch over Buchanan and right off the back shoulder of unsuspecting right-back Michael Amir Murillo, with the ball bouncing into the net for Canada’s equalizer. It had been coming.

BMO Field would erupt again seconds later after Davies tore into the box and was taken down, with the referee waving protests away as the action continued to unfold on the pitch. Both teams and their benches would clash together just before the half-time mark, with an altercation during a rare Panamanian corner kick seeing the heated atmosphere give way to a player scrimmage that was lucky to end without an yellows.

The second half got off to a familiar-feeling start, with Stephen Eustaquio driving into the box but going down under minimal contact as the referee held his whistle. Moments later, a daring far-corner shot from Wotherspoon brought the crowd to its feet before sailing wide by mere inches.

Former Toronto FC midfielder Armando Cooper was lucky to remain on the pitch following consecutive fouls just minutes after he came on as a substitute for Panama, with his first against Buchanan earning a yellow and his second against Davies seeing the referee give him the benefit of the doubt.

Herdman made a double substitution in the 63rd minute that saw Jonathan Osorio and David Wotherspoon replaced by Mark-Anthony Kaye and Sam Adekgube.

It would be Alphonso Davies to make the difference – who else – with the 20-year-old staying alert to a ball that stayed just in on the side of the right pitch, stealing the ball after a failed body-block from Cummings to drive himself into the box and fire in a left-footed blast that had Mejia helplessly watching it fly into the back of the net.

Seconds last it would be Tajon Buchanan getting the crowd on his feet, with the new Club Brugge signing seeing his shot rise over the net. The 22-year-old would get his goal two minutes later, leaping in the air to convert a great lofted header at the end of a cross from Richie Laryea.

Lille’s Jonathan David would soon find himself on the scoresheet as the result quickly got away from Panama, with Davies providing a great lofted ball into the middle of the box for Buchanan, who let the ball continue its trajectory into David’s path further to the right:

Crepeau then found himself called into action six minutes from time, coming up big to record a big save on a late Panamanian counter-attack before the rebound goal was called back for an offside position.

At the final whistle, the Canadian national team rightly celebrate a crucial 4-1 home win over Panama, with Herdman’s side showing plenty of dynamism, hunger, and togetherness as they continue to forge a path to the 2022 World Cup.

The next international window will see Canada host home games against Costa Rica and Mexico, with Edmonton set to play a cool host to the crucial matches.

With ten points after six matches, Canada now rests third in the group behind USA and Mexico, who have eleven points each. With difficult away trips to both those sides already behind Les Rouges, Canada has put itself in a prime position for the remaining World Cup Qualifiers, with tonight being described as a statement ‘watershed moment’ by Terry Dunfield.