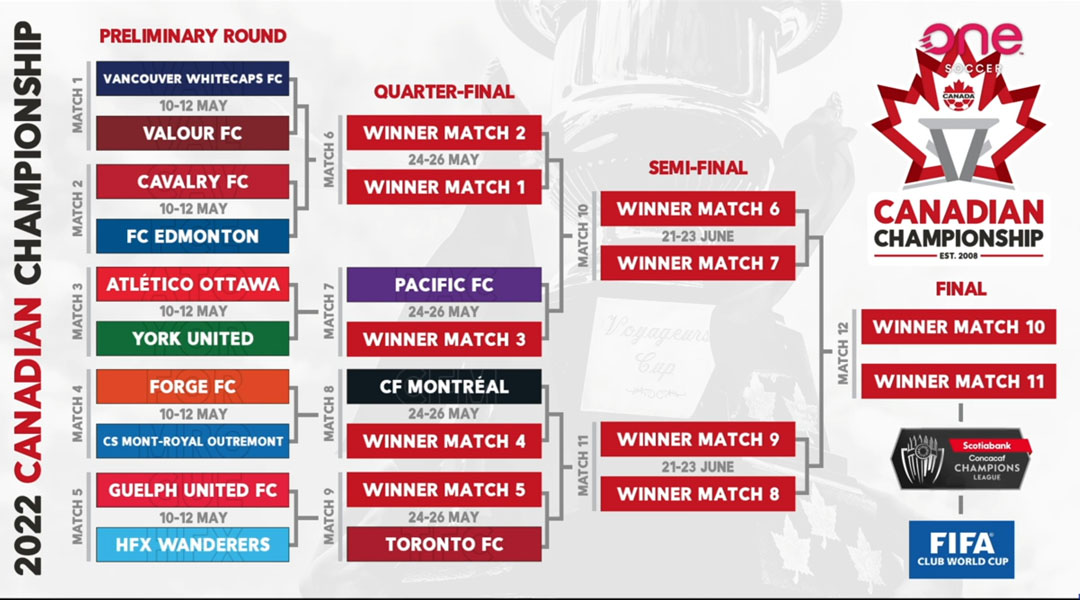 The draw for the 2022 Canadian Championship has elicited some tantalizing matches for this year’s Voyageurs Cup action.

This year’s iteration of the tournament features all eight CPL teams, the three Canadian MLS sides, and the reigning champions of both League1 Ontario and PLSQ.

The Canadian Championship has never had a live draw before, with three geography-based pots shaping the opening round whilst Toronto FC, CF Montreal, and Pacific FC each got a bye into the quarter-finals.

Without further ado, here’s how the opening round took shape:

The Vancouver Whitecaps will seek to shed the weight of unceremonious defeats against CPL sides in 2019 and 2021 as they host Valour FC at BC Place. Should the ‘Caps shake off their CPL-bogey fever, they won’t face an MLS side until the final – and that’s something the MLS club will be quite happy about.

Valour FC has never faced MLS opposition before, and it goes without saying that the Winnipeg-based side will be raring for the opportunity to impress. Last season saw Valour FC lay claim to the tournament’s top goalscorer in Austin Ricci, who is now trialing with York United.

Tommy Wheeldon Jr. had said his team deserved to be at home last season when they were matched away to FC Edmonton in the preliminary round, and now he’s gotten his wish: the second west pot mathcup will see a reverse Al Classico with cup glory on the line.

Given that the Eddies have found no success against Cavalry in any of their matchups, the home side will come in as firm favourites – though an underdog Eddies side will be hoping to surprise after a near-total roster rebuild. Cavalry are viewed as one of the stronger CPL sides in the tournament, especially given that they made history as the first CPL team to defeat MLS opposition.

Canadian Championship, meet ONRoutico.
This all-Ontario matchup will see Atletico Ottawa host York United at TD Place, where the two teams drew in all three of their league matchups there last season. This time around a draw isn’t an option, so it’ll be interesting to see who takes the initiative in the cup tie.

York United advanced to the quarter-final stage before bowing out against Toronto FC last season, whilst Atletico Ottawa saw its first foray into the cup end quickly against Valour. The much-transformed side is hoping to change the course of its young history, however, so there’s no telling how this cup tie will go down.

The hammers will host the reigning PLSQ champions at Tim Hortons Field, where they’ll be heavy favourites against a semi-professional PLSQ side that dipped into some CPL recruitment last season. CS Mont-Royale Outremont has won its league four times, though its previous three title wins came before the PLSQ winner was invited to the Canadian Championship.

Facing a team with Champions League experience will be quite the introduction for the semi-professional side.

Guelph United turned heads by winning League1 Ontario in the club’s first-ever season, with team captain Jace Kotsopoulos welcoming the opportunity to take on professional opposition in the cup this season.

It’ll be an interesting matching for Tomasz Skublak, who spent 2019 with the Wanderers and landed with Guelph United last season. He scored eleven goals in thirteen appearances, but any scored against his former side in the cup would probably become his favourite.

The Halifax Wanderers have seen a few scares against semi-professional opposition, with their 2019 tournament experience seeing them secure a slim 3-3 aggregate victory over Vaughan Azzuri via away goals, whilst last season saw them survive a second-half scare from AS Blainville.

The winner of this clash will get to host Toronto FC, so there’s plenty of history on the line for both – and quite a tough path for the victor.

The live draw also saw Patrice Bernier determine the home and away sides of the quarter-final round. Either Cavalry or Edmonton will host Vancouver or Valour in the second round, whilst Pacific FC will host the winner of the Atletico Ottawa and York United bout. Reigning champions CF Montreal will host either Forge or CS Mont-Royale Outremont, whilst either Guelph United or the Halifax Wanderers will host last year’s runners-up Toronto FC.

The 2022 Canadian Championship is already shaping up to offer plenty of drama for spectators, though the preliminary round is still just over two months away. Both the opening round and the quarter-finals will take place throughout May, with the semi-finals taking place in the third quarter of June.

This summer will also see the much-belated 2020 Canadian Championship Final take place between Forge FC and Toronto FC, with the hammers set to host their MLS opposition on Saturday, June 4.

The winner of the 2022 Canadian Championship will earn a berth to the 2023 Concacaf Champions League. Last year’s winners CF Montreal are set to take on Cruz Azul in the quarter finals of the continental competition tonight.