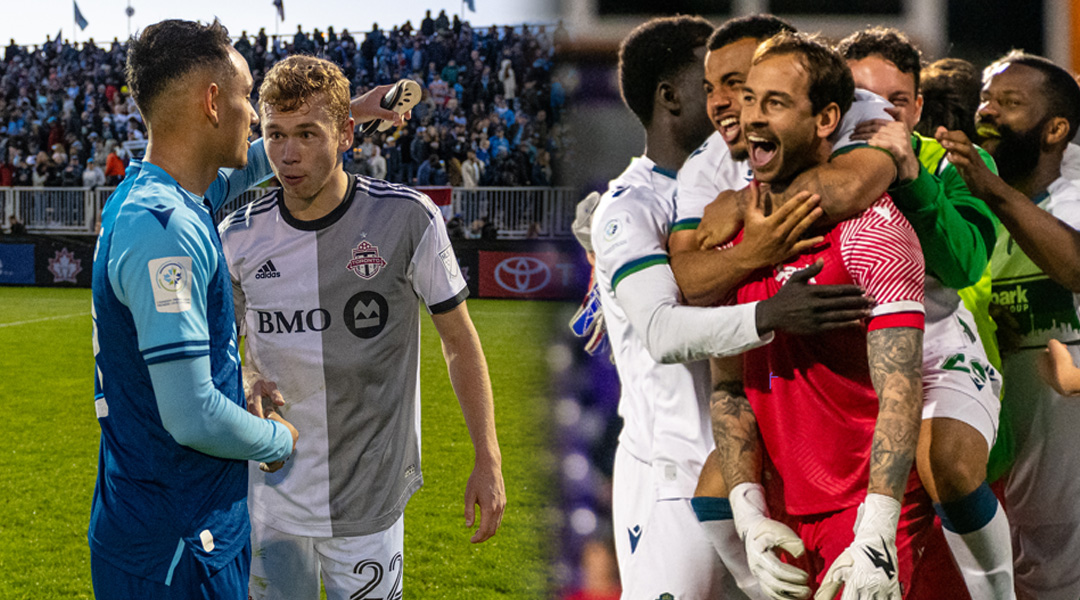 With the quarter-final stage of the 2022 Canadian Championship now complete, there have no giant killings on the menu thus far.

Last night saw the a boisterous Halifax Wanderers crowd host Toronto FC in what proved to a tightly-contested affair out east, with Pacific FC and York United then going to penalties to decide who would be advancing on to the semi-final stage.

Without further ado, here’s a recap of what proved to be a thrilling night of domestic cup action:

The TFC squad has been looking forward to an away trip against a CPL side for three years now, with last night’s matchup against Halifax finally bringing those hopes to fruition. It wasn’t the game a heavily rotated Toronto FC side would have been hoping for, however, with the Wanderers coming just a matter of minutes from forcing the two teams to a penalty shootout.

The first half saw both teams unable to get a leg up on one another, with a balanced display on the pitch being backed by a sellout crowd in downtown Halifax that showed receipts for the east coast being well and truly up for the night. The sound wouldn’t even dampen when Toronto FC took the lead ten minutes into the second half, with a corner kick seeing a ball from Peruzza deflect off an on-the-line Michael Bradley before going in net:

Instead of deflating, Stephen Hart’s Wanderers found another gear and began to put the Major League Soccer visitors under plenty of pressure. They were rewarded for their gusto twenty minutes from time, with Samuel Salter picking out a peach of a spot to send the ball sailing beyond a late dive from Quentin Westberg:

The Halifax Wanderers looked to have Toronto FC on the ropes for a large segment of the second half, but – just like in late defeat to CF Montreal here last year – they became somewhat disassembled in the game’s dying minutes. A delicious through ball allowed Halifax-born Jacob Shaffelburg to take a touch out wide before sending in an aerial ball. While Akinola whiffed the effort, Jonathan Osorio was there to send the ball goalbound at close range.

While Schaale was well positioned on the line, he could do nothing but watch the ball careen off him and into the side netting to give the visitors a late lead.

Toronto FC would see out the match, and now advances on to a semi-final stage where they will host either CF Montreal or York United back at their home venue – where they’ll hope to put in a tidier cup performance.

“The level of the league gets better every year,” noted Jonathan Osorio on the experience, “they played well and brought the pressure, as they should. When you’re the underdog that comes naturally, and I don’t think we did for most of the game.”

York United became the first CPL side to procure back-to-back penalty shootout wins last night, with Niko Giantsopoulos capping off a hectic weekend with a man-of-the-match performance to deny the reigning league champions a spot in the semi-finals.

Things didn’t look to be off to a great start for the visitors when Pacific’s Amer Didic completed a towering header in the eleventh minute, sending a tightly-angled ball well beyond Giantsopoulos to put the hosts in front:

The Nine Stripes wouldn’t really challenge Callum Irving until a nice run of buildup started by Lowell Wright led to a corner kick opportunity. Team Captain Roger Thompson leapt through the air to hammer it down with a powerful header, earning his first-ever York United goal as a result. Against the first half’s run of play thus far, the visitors were even:

They’d take the lead just a few minutes later, with Osaze De Rosario winning the ball in midfield and sending it out to Sebastian Gutierrez. The Colombian brought it out wide before sending it sailing back into the box, with De Rosario meeting it at the end of an undetected run. With a sharp downwards header, suddenly York United was in front at Starlight Stadium.

The second half would see both sees exchange blows, with Pacific coming close to equalizing through a set piece opportunity if not for a stellar save from Niko Giantsopoulos, who had just returned from an emergency loan stint with the Vancouver Whitecaps after having just played in league action on Friday.

Giantsopoulos and the rest of the squad were seconds away from securing the cup win in regular time when Amer Didic – who had scored the host’s first goal – channeled his inner De Bruyne to fire an astoundingly good ball from out of the box through a sea of players and into the opposite corner, tying things up with what was ultimately the last kick of the game.

With a whistle from Filip Dujic, the match was going to penalties.

While Giantsopoulos saved the opening Tridents spot kick, there would be a nervous air of uncertainty after Eduardo Jesus skied the club’s fourth shot. Down to the fifth and final kick takers of the shootout, Jordan Wilson confidently tucked away his opportunity, with Marco Bustos stepping up for the home side. He struck it high and to the right, but Giantsopoulos kept the ball out to complete what was, ultimately, one of his best performances seen yet.

There would be no slice of cheese penalty antics from Giantsopoulos, who joked after the match that the move was retired after a ‘100% strike rate’.

Pacific FC now bow out of the quarter-final round they had a bye into, while York United now advantage to face either Cavalry FC or the Vancouver Whitecaps, depending on tonight’s result. Becoming the first CPL side to have advanced through two penalty shootouts, they’ve built an identity on a never-say-die attitude with plenty of difference-makers scattered around the squad.

The final two matches of the 2022 Canadian Championship quarter-final stage will unfold tonight, and they’re both CPL-vs-MLS clashes: CF Montreal will host Forge FC in a repeat of a dramatic 2021 cup clash, and Cavalry FC will host the Vancouver Whitecaps in a repeat of 2019’s history-making matchup.

Interested fans can check out our match previews for tonight here.