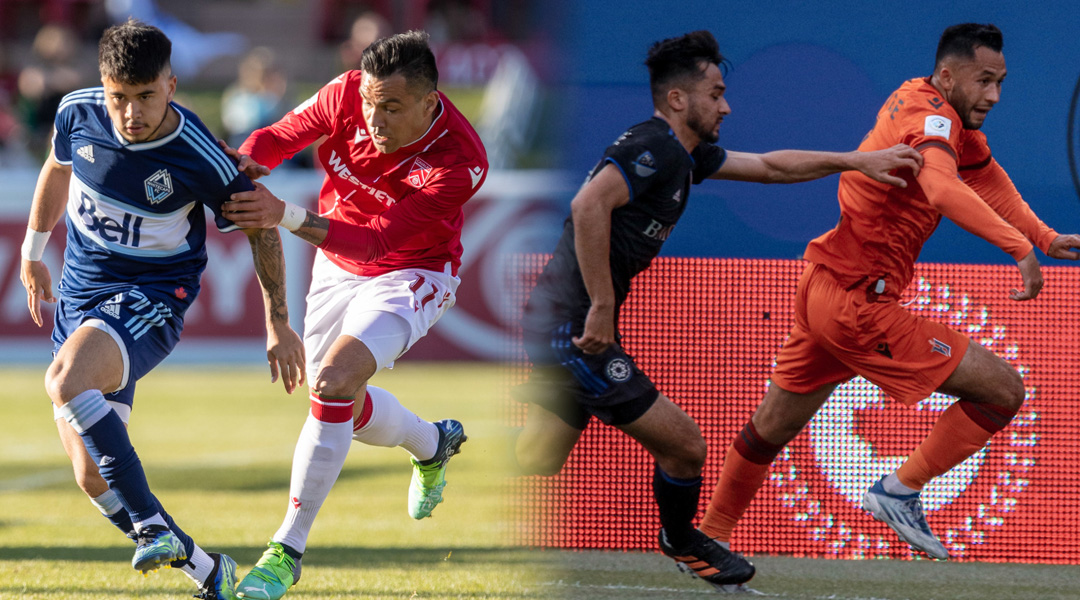 The final two matches of this year’s Canadian Championship quarter-final stage saw Major League Soccer sides rise above the competition – though it wasn’t exactly a walk in the park.

With four of the eight final teams now out of the competition, here’s a recap on what went down in the two CPL-vs-MLS clashes last night.

After two-time CPL champions Forge FC took CF Montreal to eleven rounds of penalties last year, this match was billed as one in which many thought would be an even contest. It was anything but, with the MLS hosts comfortably limiting Forge to just one shot on target while bagging three goals of their own.

The hammers defense – which recently saw every natural centre-back go down injured – conceded less than fifteen minutes into the game, with former CPL defender Joel Waterman beginning a very direct passing sequence for CF Montreal that saw Nigerian forward Sunusi Ibrahim slip beyond his man to fire the hosts in front:

The direct CF Montreal attack proved to be a massive problem for Forge, who were cut open again just minutes later after a nice back-and-forth saw Kei Kamara escape Alexander Achinioti-Jonsson to slot in a ball to a wide-open Ibrahim, who scored an easy brace before the first half was even halfway done:

Smyrniotis referred to the first half as the worst half of football the club has ever played, describing that they simply didn’t have the energy one needs for a cup tie. Things got off to an equally bad start in the second half, with young Ibrahim completing his hat trick through a wonderful set piece header.

The hammers would be unable to build any momentum for a comeback in the second half, and even Stade Saputo’s sprinklers seem to think the job was already done: several of them popped up to water the pitch in the 72nd minute, causing a small delay while they were turned off.

When referee Pierre-Luc Lauziere brought proceedings to a half after regular time, the curtains closed on what was ultimately a very comfortable showing for the reigning cup holders. For the Hamiltonian visitors, it was a cup run they’ll want to move on from: having looked uncertain against Mount Royal Outremont in the first round, this wasn’t the display of ferocity that fans are used to.

The rebilling of a history-making cup clash in 2019 proved to be a tight fair with plenty of late drama, and it’s one which Cavalry fans will look back on as a match they might’ve won.

It took seventy-two minutes for the game to produce a goal, but it arrived through an absolute belter from Cavalry forward Myer Bevan, who himself had played for the ‘Caps back in 2018. Taking control of the ball on the left edge of the box, Bevan turned towards three defenders and loosed an audacious effort that sailed beyond Cody Cropper to ignite a rowdy crowd at ATCO Field:

Tommy Wheeldon Jr.’s side looked set to repeat a win over the Whitecaps, but a set piece opportunity six minutes from time saw Erik Godoy deliver a wonderfully acute header that sliced a fine line between the defenders and Marco Carducci, restoring parity between the teams in the game’s dying embers.

For the second time in just as many days, a Canadian Championship match was going to penalties.

It was a testy shootout, but the Vancouver Whitecaps concluded their comeback after a fine save from Cody Cropper allowed Cristian Gutierrez to seal the win, with the MLS side emerging 3-5 victors from a nervy end to the match. With that, the Vancouver Whitecaps are finally on to the semi-final stage for the first time since 2018.

The 2022 Canadian Championship semi-finals will take place in mid-to-late June, and all three Major League Soccer sides have booked themselves tickets to the show.

The Vancouver Whitecaps are now set to host York United, who will become the first CPL side to have played against all three Canadian MLS sides in the cup competition. Having gone toe-to-toe with CF Montreal in 2019 before a more comfortable dispatching by Toronto FC in 2021, it’ll be an interesting affair – especially with Niko Giantsopoulos providing penalty heroics twice en route to their semi-final berth.

The other semi-final will be a marquee affair between CF Montreal and Toronto FC, the two perpetual favourites of the cup competition and a matchup fans have seen as the final on many occasions. This time only one of the two will reach that final stage, and CF Montreal will enter the tilt as favourites given their recent cup history and league form – though anything can happen in ninety minutes.