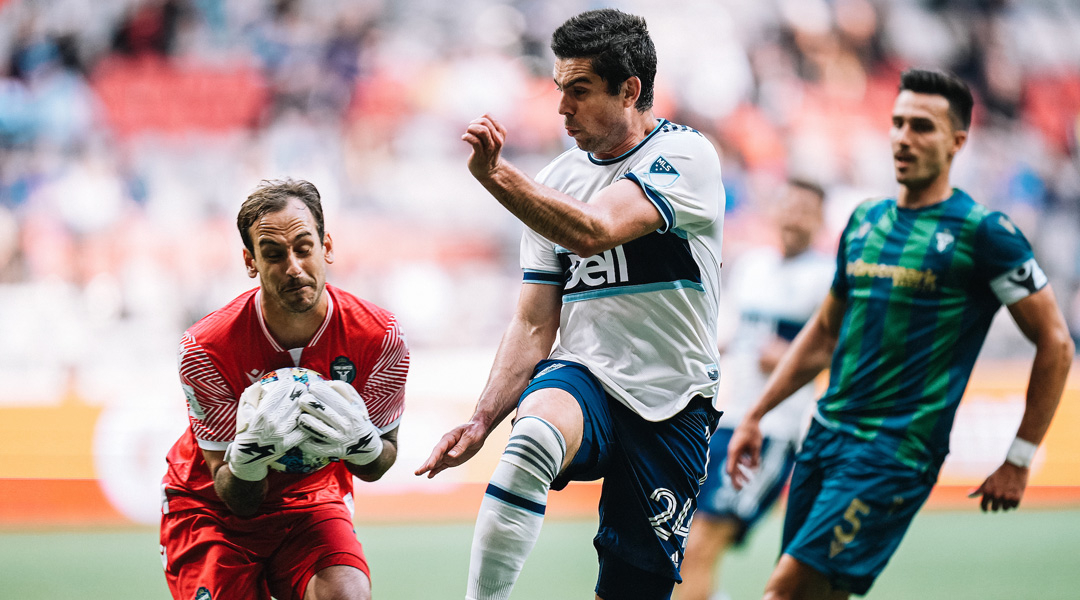 The Vancouver Whitecaps are 90 minutes away from lifting the Voyageurs Cup for the first time since 2018.

Vanni Sartini’s side bested York United 2-1 in a cagey home cup tie, with the CPL’s best defensive unit putting up a stalwart performance before a brace from Brian White ultimately made the difference in the second half.

The Vancouver Whitecaps had comfortably bested Valour FC in the preliminary round before seeing off Cavalry FC through penalties to reach tonight’s semi-final, where they continued their vengeance run against CPL clubs in the cup competition.

York United had reached the penultimate cup clash after heart-stopping penalty shootout wins over Atletico Ottawa and Pacific FC, but have now bowed out against an MLS side for the second year in a row.

York United goalkeeper Niko Giantsopoulos – who had actually been loaned to the Whitecaps for a weekend last month – wouldn’t have long to wait for his first save, comfortably swallowing up a well-constructed set piece from the hosts in the third minute. Niko would have a busy first half, with the Whitecaps sending four of thirteen shots on target.

The MLS side’s best chance of the first half came just over halfway through it when a quick transition saw Lucas Cavallini tear into the Nine Stripes box to loose a shot at Giantsopoulos, who proved up to the save. The pressure kept cooking at BC Place, however, with Ryan Gauld sending a header just high moments later.

A stalwart Nine Stripes defensive effort gave confidence for some midfield turnovers in their favour, with Isaiah Johnston and Matteo Hernandez looking good in the middle of the park. The Nine Stripes gave away more fouls than they would’ve liked, though, with Cedric Toussaint going into the referee’s pocketbook.

York United survived the onslaught in the first half to finish it with four consecutive corners of their own, but the CPL side couldn’t crack Cropper with the set pieces – nor could an Abzi freekick catch the goalkeeper out at the near-post.

The crowd at BC Place wouldn’t have to wait long for a goal in the second half, however, with Ryan Raposo loosing an audacious effort from the left flank that pinged off the post before Brian White sent the rebound home.

York United star Diyaeddine Abzi won a freekick a few yards outside the box a few minutes later, catching Cropper out with a sneaky low freekick that came inches away from equalizing for the Nine Stripes.

The Whitecaps would earn an insurance goal fifteen minutes from time after a fantastic ball from Ryan Gauld flew ahead of two defenders to find a smart run from Brian White, who buried his brace opportunity with a deft finish.

A series of late game changes from Nine Stripes head coach Martin Nash saw the Nine Stripes land more comfortably in possession, with a late attack in the final ten minutes seeing Isaiah Johnston take a smart touch into the box to bag one for the visitors:

Despite the late game goal, the Nine Stripes couldn’t upset the proverbial apple cart, with the Vancouver Whitecaps able to see out the the rest of the game to secure passage to the 2022 Canadian Championship Final.

The Vancouver Whitecaps will now march on to their first Canadian Championship Final since 2018, where they’ll face a Toronto FC side that deposed CF Montreal earlier tonight.

The match also marks the final York United appearance for Diyaeddine Abzi, who will now depart for French second division side Pau FC after making 76 appearances across all competitions for the green and blue.