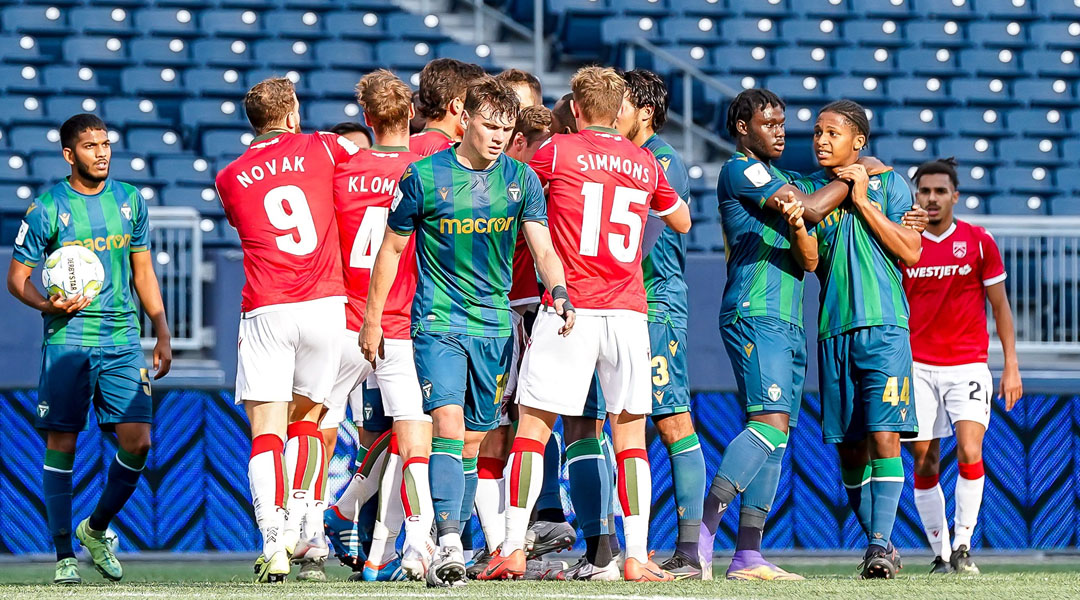 The second round of Canadian Premier League action brought goals, drama, and red cards in spades. With a new week upon us, we wanted to take a look at what’s coming next as Canada’s pro soccer league continues throughout its first month of action.

See Also: Recapping What Went Down In Week 2 Of CPL Action

Here’s three talking points that are worth noting before all eight teams are thrown back into the fray:

Right out of the gate, the fourth CPL season seems to have taken the standings from last year and flipped them on their head – with one obvious exception. Now three teams who missed playoffs last year are in the top half, while three which had made it now represent the very bottom of the opening standings.

Sure, it’s only two games in, but it’s not how many would have imagined it.

The early change in status quo is due in no small part to a refreshed Atletico Ottawa side bringing their ‘A’ game right from the get-go, scoring two late matchwinners as Nathan Ingham collected two clean sheets. At the same time, an underdog FC Edmonton side showed a strong never-say-die mentality to come back from behind and rescue two points.

Despite all the changes, reigning league champion Pacific FC still sits upon the top, picking up where they left off last year to outpace every team in scoring so far. Given the changes seen in the team, that’s no small feat: James Merriman has procured a perfect start in his first season as head coach, though it’s worth noting that even having been an interim manager for two matches, he still pulled off a perfect win record.

It’s early days, but aside from Pacific (first) and Valour (fifth), nobody is remotely close to where they might have expected to be. It’ll be interesting to see where things go from here.

One of the biggest questions of the Halifax Wanderers offseason was if they could pick up enough offensive talent to not be left stranded if star attacker Joao Morelli was sidelined. After the midfield maestro had to be stretchered off against Atletico Ottawa over the weekend, we might see the answer much sooner than expected.

Last season saw Morelli’s fourteen-goal haul represent half of Halifax’s goals, putting him miles ahead of the squad’s next best contributor (Samuel Salter with three). Make no mistake: Joao’s absence will be a significant blow for the east coast side.

Last season saw Morelli’s golden boot form leave the Halifax Wanderers in a playoff position before he was sidelined for several games. The east coast side came up dry when it looked for goals without him, and slipped out of playoff position during the absence of the CPL MVP. With Morelli’s knee injury “not looking good” upon first impressions, this will be a big test to see how Hart’s roster has grown since last season.

With the doom-and-gloom out of the way, it’s worth noting that the club had a stellar offseason that saw it recruit high-profile midfield talents in Aidan Daniels and MLS SuperDraft pick Mohamed Omar, among some other astute pickups. We might see a Wanderers side that reacts differently to Joao’s absence now.

A Low-Key Heated Affair Between York United and Cavalry

In the nine times that Cavalry FC has squared up against York United, there have been no less than 37 yellows and three red cards. The surprisingly chippy affair has resulted in team brawls from 2019 to 2021, with York Lions Stadium perhaps seeing one of the most egregious matches on an electric Saturday night.

With both Martin Nash, Mauro Eustaquio, and Oliver Minatel all having left Cavalry for York United this year, one of two things will happen: we’ll either see a much tamer outing, or we’ll see a emotions flair in what has proven to be a hard-fought matchup in the past.

With neither side getting off to the hot start they would’ve hoped for, these’ll be two teams hungry for blood. The opening two weeks of Canadian Premier League action have seen multiple red cards, and if we had to place a bet on any fixture to keep that ball rolling it’d be this one.

The next round of action will see Martin Nash square up against his old club under the aforementioned Friday Night Lights of York Lions Stadium, with the weekend then seeing Edmonton play its first away match of the year against Forge and a coast-to-coast clash between Pacific and Halifax taking place on Saturday before Atletico Ottawa wraps up the third round – and its three-game homestand – against Valour on Sunday.