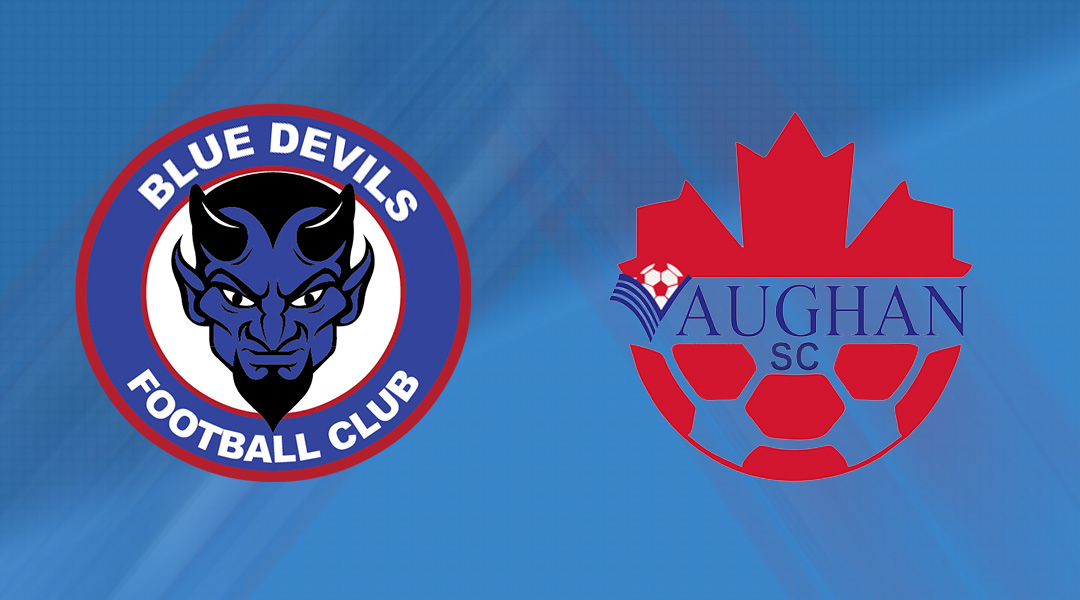 The 2022 League1 Ontario men’s final has been set, and it’ll be a heavyweight tilt between two perennial league favourites: Blue Devils FC and Vaughan Azzurri.

Both Vaughan Azzurri and Blue Devils FC earned byes into the semi-finals, and the extra rest seems to have paid dividends: expansion side Simcoe County Rovers had left it late to secure a midweek playoff win over North Toronto Nitros, while Alliance United bested ProStars FC 4-0 a few days ago through braces from the Sivananthan brothers.

This weekend saw the semi-finals take place, with both home teams securing their berth to the 2022 League1 Ontario Final after hard-fought matches.

Here’s how it all went down:

The Vaughan Azzurri haven’t tasted defeat yet this season, however, with the hosts showing strong mental resolve to keep themselves in the game. Former Valour FC Captain Dylan Carreiro procured a fine finish for the Azzurri, slotting home a nice pass from the prolific Massimo Ferrin to secure an equalizer.

The winning goal would also involve some CPL experience, with former Wanderer Alejandro Portal providing a long pass for Forge stand-in Orlendis Benitez to latch on to behind the defensive line, with the forward soon slotting the ball home to launch Vaughan Azzurri into the final.

While Vaughan marches on to the final, expansion side Simcoe County Rovers finish the season with their heads held high and, reportedly, a few communications from CPL sides interested in some of their players.

While only having joined the side in the last few weeks, it was University of Toronto striker Artem Tesker who lifted Alliance to an early lead after just nine minutes played, firing in a near-post shot that left Lucas Birnstingl well-beaten. Fighting back in the heat of a warm Sunday afternoon, Duncan Wilde’s Blue Devils side would equalize just nine minutes later through Matthew Santos, who cut in sharply to fire a powerful shot into the bottom corner.

The first half wouldn’t end with all things square, however, with veteran League1 Ontario athlete Khody Ellis putting the hosts in front ten minutes before half-time. The second half would see former FC Edmonton defender Samuel Gardner provide a big equalizer for Ilya Orlov’s side.

The winning goal would come from a Blue Devil, however, with Taha Ilyas getting his head to a cross and sending it soaring back-post to fire up the crowd at Bronte Athletic Park. Last year’s runners-up defended the lead for the remainder of the match, securing a tight 3-2 home victory for Blue Devils.

With two powerhouse sides now set to duke it out in the 2022 League1 Ontario Final, fans are in for a treat when the final takes place at the Ontario Soccer Centre this Saturday, September 3 at 1:00PM EST.

The winner of the match won’t only get a championship trophy, but will also earn a spot in the 2023 Canadian Championship, too.

Each team to have bowed out in the playoffs can take some consolation in the fact that they’ve still positioned themselves nicely for the 2024 league restructuring that will implement promotion and relegation.

Fans interested in purchasing a ticket to the final can do so here.