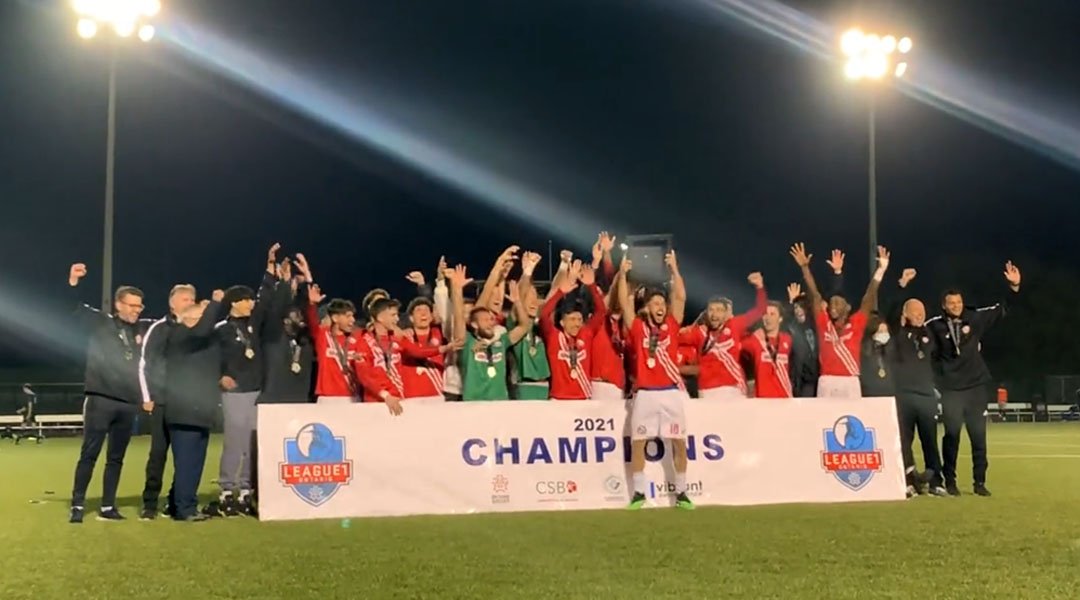 A new-look League1 Ontario commences its men’s Premier Division on Thursday, with the women’s equivalent doing so the following day. With what was the busiest off-season in the league’s history, the 2022 edition will be the most exciting one yet.

Here are three reasons to look forward to the upcoming action:

Both leagues will undergo the new format, voted on by the clubs. Each of the teams will meet each other once in the regular season, totaling to 21 games in the men’s division and 19 in the women’s.

From there, the top six will make the playoffs, with the first two teams getting a first round bye. Third place will host sixth, fourth welcoming the fifth best team. The lower ranked winner in the first round will meet the regular season winner in the semifinals, with the runner up facing the other first round winner. The finals are set to take place on Labour Day (September 3rd) for the men and August 6 for the women.

There are also a plethora of new teams in both divisions. A total of 22 teams will partake in the Premier Division on the men’s side, seven more than last year’s edition.

There are three expansion sides coming in, with Electric City, Burlington SC and Simcoe County Rovers joining the fray. In addition, there will be three teams that will be making their debut in the Premier Division after partaking in the Reserve Division last year. Those are Hamilton United Elite, St. Catherine’s Roma Wolves, and BVB IA Waterloo (formerly known as Waterloo United). Finally, Pickering FC will make a return after going on a two-year hiatus.

As for the ladies’ division, the 20 teams competing in this year’s league is nearly triple that of a year ago. There are five completely new teams coming in, including the same three new men’s teams. Also joining for the first time will be St. Catherine’s Roma Wolves and NDC Ontario, the province’s development team.

Guelph Union and Waterloo United also make their bows in the Premier Division having competed in the Reserve Division a year ago. Outside of them, ProStars are back after competing in the 2015 season. They are a new iteration of the first team.

Another new addition is League1 Canada, the umbrella for pro-am football across the country. The new setup will see L1O enter a partnership with Première ligue de soccer du Québec (PLSQ) and the incoming League1 BC.

The three provincial leagues will work together to strengthen the pro-am level of football across the country. Originally the idea of former CPL commissioner David Clanachan, this will be a game-changer for football at this level.

A resultant of League1 Canada will be the introduction of a new cup competition. This will feature the winners of each provincial league as well as a host team. For this year’s tournament, it will take place in Laval, Quebec, permitting PLSQ to have another team.

The most important piece of news from the off-season is impending promotion and relegation coming in 2024. The results from the 2022 and 2023 seasons will be used to determine the teams playing in League1 Ontario Premier and Championship in two years time.

The 12 best men teams and 10 best women teams will partake in the Premier Division come 2024. The remaining 10 teams in each league will play in the Championship Division. No new teams will come into the league between now and 2024.

All points accrued in the 2023 season will count to the combined table, while 75% of points in the coming season will be used towards the final table. This was done to allow the newer teams a season to adjust. It is also worth noting that the only regular season games will count to this table and not playoff games.

For more information about promotion and relegation in League1 Ontario, you can find that here.

Predictions for this season

Starting with the women’s division, I think there are five teams that are strong favourites to make the playoffs. I expect Simcoe County Rovers, Electric City, Blue Devils, FC London, and Woodbridge Strikers to finish in the top six. For sixth, I will give the edge to Guelph Union, though I can easily see Vaughan Azzurri making it instead.

As for the playoffs, I foresee a final between Simcoe County Rovers and FC London. The latter won the regular season last year but crashed out in the first round of the playoffs. However, I am tipping the Rovers to come out on top in their maiden season.

Moving on the men’s league, I have four teams as locks for the playoffs. Those are Electric City, Blue Devils, Simcoe County Rovers, and Guelph United. For the last two spots, I have Vaughan Azzuri and Master’s Futbol in pole position to snag them. Look out for Sigma FC, London FC, and Woodbridge Strikers to bring serious competition for the those final spots.

As for the playoffs, I am thinking we will see a final between the two new teams Electric City and Simcoe County Rovers. They are by far the most ambitious clubs in both leagues with their signings. I do favour Electric City to win the title and punch a ticket to the 2023 Canadian Championship.

The men’s season will get underway on Thursday with new boys Electric City travelling to Guelph to take on the reigning champions Guelph United. The remaining ten games of the first round will happen between Friday and next week Wednesday.

The women’s season will start off with NDC Ontario hosting holders Woodbridge Strikers on Friday night. The other nine first round games will occur between Saturday and Wednesday.

There is a lot to be excited about for the future of League1 Ontario, and with a full season ahead, we can count on quite the thrills over the next four and a half months.