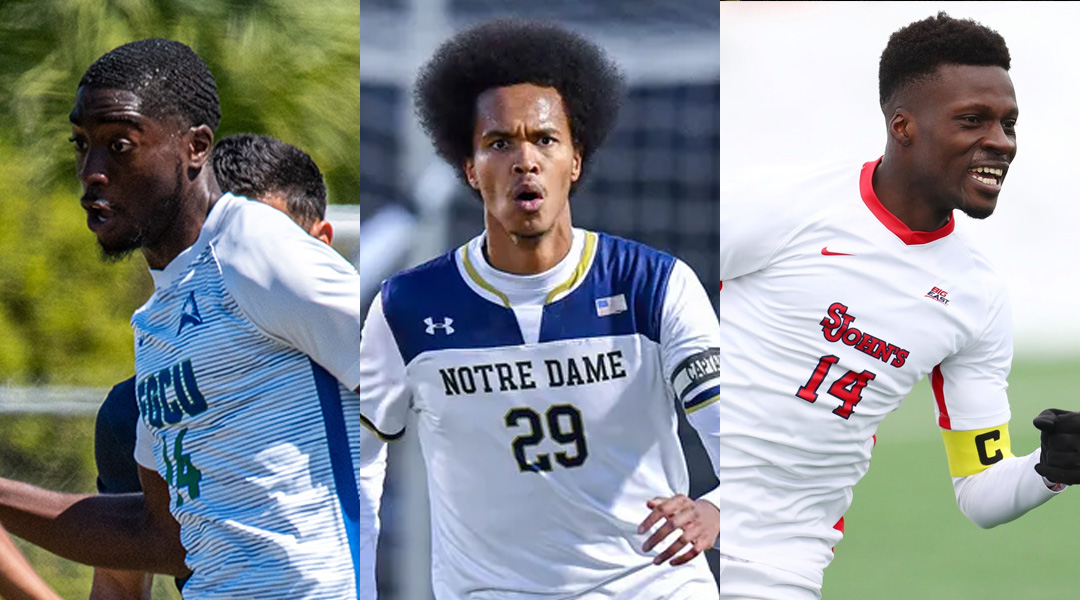 Who Are The Canadians In The MLS SuperDraft?

With nine Canadian athletes eligible in the 2022 MLS SuperDraft, we wanted to take a look at who might be inking a deal in Major League Soccer in the near future.

With the likes of Cyle Larin, Richie Laryea, Tajon Buchanan, and Alistair Johnston all springing up over the last six drafts, one never knows where the next Canadian star is waiting. Without further ado, let’s take a look at the Canadians set to feature in the 2022 MLS SuperDraft:

Born in Montreal, Charles Auguste is a versatile midfielder who has shown plenty of flair in the middle of the park with quick feet and an eye for a good pass.

The five-foot-ten midfielder played multiple seasons with PLSQ side CS St-Hubert, developing alongside Aboubacar Sissoko while simultaneously featuring for College Ahuntsic in RSEQ action. He earned two All Star nods with Ahuntsic while leading the college to a silver medal at the 2018 CCAA National Championship, and even got called up to the Haiti U-20 squad a year before that, too.

Auguste elevated his game to another level after transitioning to Creighton University in Nebraska, where the youngster is now in his senior year with two semesters left. His time with the Bluejays (a confusing sentence for Toronto-based readers) saw him establish himself as a real team leader with a high ceiling in terms of talent.

While he’s waiting to see what unfolds in the 2022 MLS SuperDraft first and foremost, he told Northern Tribune that he’d be open to a move to the Canadian Premier League this season. With two semesters left at Creighton, the Montreal baller hopes that his professional football career will be starting shortly.

Displaying defensive-minded versatility whether leading the back line or pushing up to the middle of the park, Dos Santos has proven himself to be good in the air with a keen eye for tackles, becoming an ever-present starter throughout both the junior and senior sides of his college career. In 69 matches over the last four years, Nathan started 68 games while adopting to a centre-back role when he was asked to – though that isn’t to say he didn’t have an eye for the attacking pass, either.

Forge fans may want to be on the lookout, too: Dos Santos spent time with pipeline club Sigma FC, featuring for the League1 Ontario side in 2017 after helping the U-20 squad to a league title and cup championship. Before that, he plied his trade for the Woodbridge Strikers and earned back-to-back Ontario Cup Championships there.

At an imposing six-foot-six, Hamilton-raised Luka Gavran got his start with GPS Academy alongside fellow draft pick Tani Oluwaseyi. His youth career saw him learn the craft in both the Hamilton Croatia and Dinamo Zagreb youth development programs, with Gavran eventually helping GPS to a Vase Cup championship in Northern Ireland during a season that also saw him named the Ontario Academy Soccer League Goalie of the Year.

After riding the bench in 2018, Gavran broke into the St. John’s University first team to make 18 appearances in 2019, recording eight combined shutouts with co-goalkeeper Yan Hoffelner and preventing anything from getting past him in 10 of 18 appearances. This year saw him appear in all ten matches for the Red Storm, finishing with 0.72 goals against with Gavran making a big penalty stop against Seton Hall along the way.

The 2022 MLS SuperDraft is chock full of talented goalkeepers, so if Gabran goes undrafted he’d be a solid option for Canadian Premier League sides looking for tested, young competition.

Toronto-born forward O’Vonte Mullings developed through the academy system of FC Durham and made an immediate impact at FGCU: he tallied seven goals and four assists in his first season, and kept up a high standard throughout the rest of his seasons down south.

Mullings now finishes his university career with 28 goals and 7 assists after 57 appearances, painting him as a forward with potential to take the next step. A capable player out wide, he’s got impressive speed and versatility – and a decent looking highlight tape, too.

With his agent specifying that O’Vonte is open to any opportunity at the professional level, it seems like he’d be open to CPL offers if nothing stems from the SuperDraft. He wouldn’t be the first FGCU graduate to find his way into Canada’s top flight, with Nathan Ingham having once played for the Eagles, too.

Nigerian-born forward Tani Oluwaseyi is a wide attacker with has procured an immense twenty goals and ten assists throughout three seasons with the St. John’s University Red Storm, cementing himself as both a potent and unselfish forward with a good eye the best goalscoring opportunity.

Oluwaseyi was just ten when his family immigrated to Mississauga, with the forward establishing himself at GPS Academy and winning the golden boot at the 2017 Super Cup in Ireland, while also leading the team to Ontario Academy Soccer League and Provincial Indoor Soccer League championships. He credits a lot of his early development to former Hamilton Croatia coach Ron Davidson.

With Oluwaseyi missing the 2021 fall season due to a knee injury, however, some MLS sides may be scared away from drafting an individual who otherwise would arrive as a high-ranking pick. If he’s open to offers from the CPL, any outreaching clubs might find themselves a gem.

Notre Dame Captain Mohamed Omar is a highly-touted figure in the 2022 MLS SuperDraft, with many expecting him to go as a highly-coveted first round pick.

An efficient deep-lying distributor, the six-foot-three midfielder has proven quite capable of breaking up play in the middle of the pitch and dictating tempo. While he’s helped to organize Notre Dame transitions of play quite well, he’s got some great goals in his wheelhouse, too.

With a solid sense for tackling and good physicality, he’s the kind of player who certainly has a ceiling big enough for the next level. Omar states that his current focus is all-in on Major League Soccer, and that he hasn’t given too much though to the CPL at the present. With Omar coming in as a highly-touted first round pick, it should come as no surprise that his ambitions lie with MLS.

Preston Popp – Forward for the University of North Carolina at Charlotte

Dual national Preston Popp was born in Montreal but raised in North Carolina, so it remains to be seen if his Canadian citizenship may open doors for the forward up north.

His time with the Charlotte 49ers saw him contribute an impressive twenty-two goals and four assists throughout 67 appearances, with Popp having firmly established himself in the team from the start of his freshman year. He finished his time as a 49er on a high, scoring a career-high eight goals to earn his third All-Southeast Region selection honour.

He has also plied his trade for USL2 side North Carolina FC U-23, bagging a few goals there, too.

The son of former Argos GM Jim Popp, Preston’s youth career saw him play for both the New York Red Bulls U-23 and the Charlotte Soccer Academy, where he once scored 24 goals in a single USSDA U-18 season. He also helped North Carolina FC finish second in its division of the USSF Development Academy, with the forward having scored an astounding 25 goals in 28 games in 2017.

Burlington-born midfielder Simon Triantafillou proved to be an integral midfielder for both Providence College and Syracuse University, with the midfielder establishing himself as captain material in numerous locations throughout his young career thus far.

His season with the Providence College Friars saw him lead the team in assists, recording six of them across 21 games played. At Syracuse, Triantafillou captained the side and played in every match for his 2020-2021 season, recording two goals and two assists. He’d been a mainstay with Syracuse since his arrival, developing alongside previous SuperDraft picks like Ryan Raposo and Nyal Higgins.

Having captained League1 Ontario’s Sigma FC under the helm of Bobby Smyrniotis, it’d be easy to envision the midfielder joining their CPL affiliate, Forge, if he isn’t picked up in MLS. If he does, he would join former Syracuse MLS SuperDraft pick Chris Nanco out in Hamilton.

Brampton-born striker Reshaun Walkes has been an absolute phenom at the NCAA level, scoring 14 goals in 25 appearances in Texas after bagging an immense 29 goals in 30 appearances at the NJCAA level with Lewis & Clarke Community College.

The six-foot-one striker really upped his game for his final RGV campaign, where he not only contributed nine goals in 17 appearances but provided seven assists along the way, too. Walkes has also kept busy at the USL2 level, helping the Des Moines Menace to a playoff run this season and assisting himself with a unique chip-to-header goal along the way. A physically imposing striker with a knack for good goal conversion, there’s a lot of potential for a target man in Walkes.

Before enrolling in Texas, he spent time with League1 Ontario outfit Master’s FA, bagging six goals in 17 appearances through the 2018-2019 seasons, the latter of which saw Master’s FA hoist the league title for the first time ever.

For comparison’s sake, Valour FC forward William Akio enjoyed a breakout year in the CPL after wrapping up his time with RGV, where he had scored 18 goals in 40 appearances before going on to score eight goals in 28 league appearances in his rookie CPL season. Walkes is represented by FutureStars Sports, who currently represent York United’s Lowell Wright.

Canadian fans might also want to keep an eye on RGV goalkeeper Trevor Schneider, too – he’s not in the draft, but he’s back in BC.

With the 2022 MLS SuperDraft set to take place on January 11, fans won’t have long to wait in order to find out which Canadians get their names called in the draft. Those who don’t might find themselves drawing Canadian Premier League interest, though it remains to be see what ultimately unfolds for the young talent.

The full list of players eligible for the 2022 MLS SuperDraft can be found here.