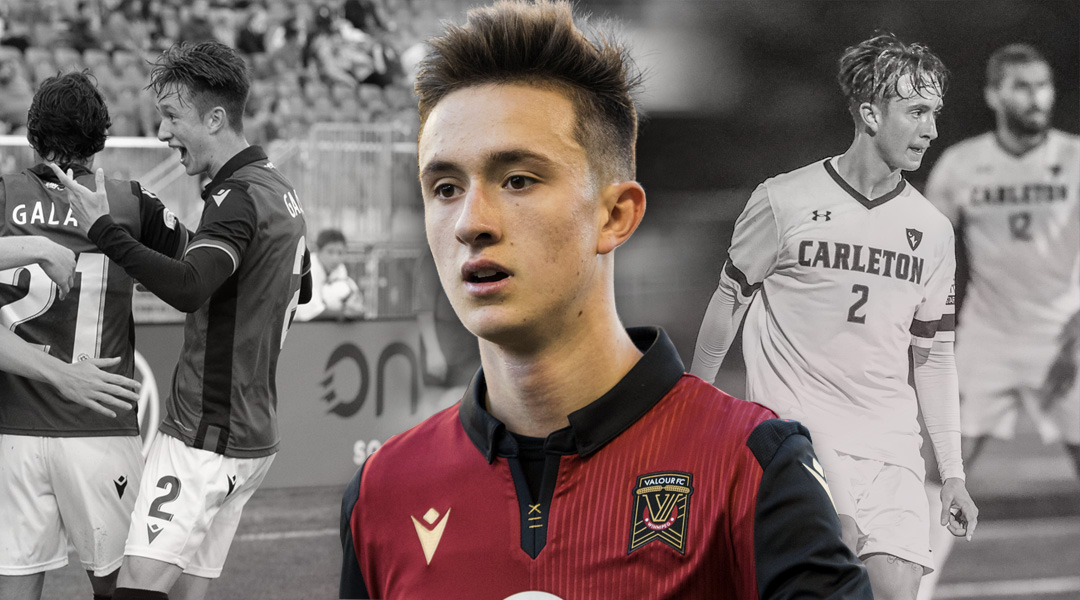 Former Valour FC full-back Raphael Garcia is ready to give professional football a try again, despite his first tastes of it having proven to be tough experience.

His previous seasons with Valour shown him to be a promising talent, but jumping into physical action with fully-developed athletes at such a young age proved to be a difficult challenge. Injuries and financial stresses then combined to land Garcia an early exit from pro game, though he learned a lot about himself in the process.

“When I was healthy, I was one of the best up-and-coming young players on the team. I was confident, but sometimes my body couldn’t keep up,” says Garcia.

What followed was a mental reset at Carleton University, where Garcia put forth two goals and four assists throughout nine matches, earning First-Team All Canadian Honours as the Ravens fell one penalty kick short of a national championship.

Having rediscovered a joy for the game through a multitude of factors, the law student has now made himself eligible for the 2022 CPL-U SPORTS Draft and is curious to see what doing so might spark.

Now in a healthier space both mentally and physically, he feels an edge to his game that wasn’t there before. To understand where his mind is at now, though, one has to understand where the path has taken him thus far.

The right-back made his first steps into professional football with Valour three years ago, with former head coach Rob Gale having liked what he saw from Garcia’s multi-year tenure with the CF Montreal Academy.

His first season in Winnipeg started slowly, with the youngster earning a handful of opportunities in the spring season before collecting significantly more in the fall. He finished his rookie campaign with 16 appearances and, despite not having much in his bank account, was keen to return for a second season.

All-told, Garcia’s first years in professional football saw him make between $15,000-$20,000 annually, a number he says doesn’t matter so much when you’re 18 or 19, but wasn’t so great when you’re getting beyond those years. Despite that, he still returned to the club ahead of The Island Games alongside Yohan Le Bourhis, with both players expected to help the side fill out U-21 minutes. Instead, injuries saw the full-back sidelined for the entirety of the bubble.

“The Island Games were short, and when you get one injury and you’re done, that was really tough for me. Whether I like it or not, that’s the way my professional career as it stands ended: me being injured for a five-week season.”

The full-back had grappled with tendonitis in both knees, a sprained ankle, and a pulled groin in the build-up to what he had hoped would be a showcase tournament. “I was a mess,” he reflects, “and it made me realize I wasn’t used to playing against men. I realized I should probably go back to school, and have more security.”

Garcia had been stewing his next steps when his time in PEI concluded. Having been on a short-term contract ahead of the shortened season, he wasn’t surprised when Valour said it was opting to move on the full-back. With his injuries and the fact that he was at the end of his U-21 age bracket, he understood.

“I can’t hold anything against them. When you have a player who’s been injured for a whole year, you’re probably not going to be brought back for the next year.”

Knowing the heavy toll that financial uncertainty had played on his mental health, he opted to shift his focus to education. Following in his brother’s footsteps, he enrolled in law at Carleton University and put forth a stellar rookie campaign for the Ravens after finding fresh perspective under head coach Kwesi Loney.

A lot of credit to my head coach. I came in and he knew that I was wondering if I even like the sport anymore, or if I was even playing for the right reasons. When I came here, I started enjoying it. The pressure isn’t the same, either. There are a lot of factors that go into it, but it’s not like it’s a flip that just switched and I liked soccer again – I’m still dealing with those issues. I appreciate it more, but I’m not fully there yet.

Even with the draft on the horizon, he’s spending his nights hitting the books and sharpening his mind along with his body. His growth is a process, but 2021 proved to be a year full of it.

His first call after enrolling with Carleton University had been to Ricky Comba, his new team captain. Garcia had shared the pitch with him since they were nine, with several of his former Gloucester Hornets teammates assembling at Carleton for one last go at a national championship. Luca Piccioli had played with Garcia with both the Hornets and the CF Montreal Academy, too.

“We tried to assemble the Avengers and bring the championship home,” he laughs, “we fell short at the end, but I’m still proud of this group. We truly give it our all.”

The familiar faces helped, but that isn’t to say that Raphael didn’t have a good rapport with the faces that were new to him. Another significant factor in sparking renewed joy for the game was the strong sense of brotherhood he felt with the Ravens.

“When I was in the CPL – and I was also guilty of doing this – sometimes you’re playing, and you feel like the guys on the bench and in the stands, you’re wondering if they want you to do good or bad. It’s a competitive world, and sometimes at the professional level you get selfish and a toxic mindset of just wanting to play takes hold. At the university level, it’s completely different.”

Related: From Rejection to Redemption: The Story Of Jordan Haynes

“Not many professional players will admit to this,” says Garcia, “but it’s really part of the job – and it can get really toxic.”

Having landed in a much better place mentally after removing himself from the professional game, the question of why Garcia would put himself on the eligibility list to return to it had to be asked. The answer is that he now finds himself looking through a new lens on the professional game, with his new career path in law removing a lot of factors that gave him stress a few years ago.

Now under fresh circumstances, he’s ready to perform at the professional level again if a club should call on him. He has unfinished business, so to speak.

The way my professional career ‘ended’, it wasn’t the way I wanted. It didn’t feel right. I want to come back. Now having university as a Plan B, to always have something to fall back on, I can make myself eligible for the draft, see what happens, and there’s no stress.

With that weight off his shoulder, his enjoyment of the game has changed the way he plays, too.

“If I do get drafted, I think that’ll show on the field – I’ll play with a lot more confidence without that pressure on my shoulder.”

Whether he signs a U SPORTS deal or not, the Ravens still have themselves a top quality full-back with a few more years to go before he leaves with a law degree in hand.

“I just play soccer, and then I see what happens. We’ll see if that helps me out or if it didn’t, but that’s the way I treat it and it’s much healthier for me both mentally and physically. I feel better treating it like this.”

“I know a couple mock drafts had me in it, and one had me going as number one – but they might know something I don’t!”