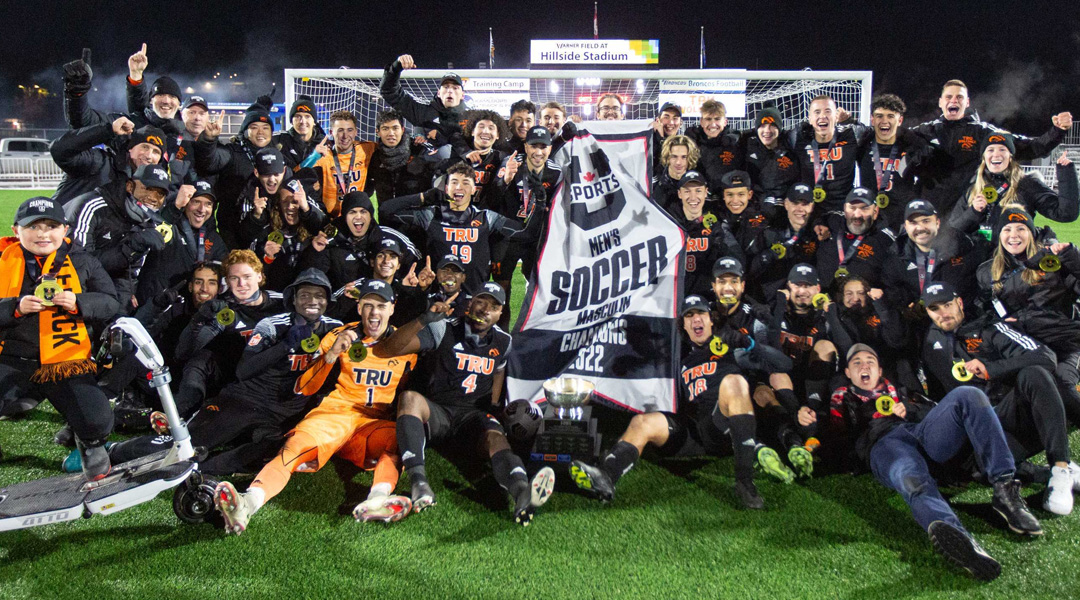 The 2022 U Sports Men’s Soccer Championship saw tournament hosts Thompson Rivers University run the gamut to hoist a national trophy in front of some 2,400 spectators at Hillside Stadium, with plenty of previous CPL draftees catching our eye in the tournament.

While several youngsters from outside of CPL draft and roster circles turned heads, we wanted to focus on a few fringe Canadian Premier League prospects who caught our attention in Kamloops this week.

Without further ado, here’s three big examples of the CPL’s growing links with U Sports:

Thunderbirds Charge To Final With CPL Ties On Full Display

There were Canadian Premier League links aplenty in the UBC Thunderbirds roster, many of whom quickly came up big in a 4-2 quarter-final victory over TMU: that match saw two former draft picks and one former Cavalry youngster all find the net, with team captain Daniel Kaiser netting an early equalizer before 2018 Pacific third round pack Nick Fussell and 2021 Pacific draft pick Victory Shumbusho tallied their own, too

Kaiser – a former Cavalry youngster who also played for League1 BC side Varsity FC this year – also won the Nike Top Performer award for the game-winners, too.

The Thunderbirds eventually reached the final against the TRU Wolfpack, where a thrilling affair saw former FC Edmonton midfielder Thomas Gardner assist Kaiser – a little Al Classico combination, if you will – to tie the match with five minutes to go in extra time.

While the Wolfpack eventually won the penalty shootout to hoist the trophy, the Thunderbirds ensured that CPL-linked talent were on display from the first whistle of the competition all the way to the last.

It took just six minutes for the U SPORTS Men’s Soccer Championship to see its first goal after former FC Edmonton draft pick Quentin Paumier curled in a beauty from thirty yards out, finding space beyond the reach of X-Men keeper Samuel Ditz on the top left.

Paumier had led the University of Montreal to a national championship title just one year ago, and while he couldn’t complete the feat this time around, the Olympique Marsielle and the Cote Bleue Academy product has certainly shown a flare for set pieces that we might one grace the CPL.

Former Pacific FC draft pick Jan Pirretas Glasmacher skippered the TRU Wolfpack through a penalty shootout-laden adventure that saw the tournament hosts endure shootouts at every step of the way en route to a national trophy.

It began with a tightly-contested knockout bout win over the McMaster Marauders, with the Rivers FC defender even getting on the scoresheet in the tail end of the first half and scoring a spot kick in the ensuing shootout, too. The Wolfpack then bested number-one seed Cape Breton Capers in a semi-final penalty shootout, before doing the same against the UBC Thunderbirds in front of a home crowd of 2,400.

Pirretas was a consistent performer for the side en route to the Wolfpack’s first-ever U Sports national championship, though eyes may rightly be on goalkeeping hero Jackson Gardner for now.

There were plenty of other Canadian Premier League links on display in the tournament, with former Halifax Wanderers midfielder Vincent Lamy earning a player of the match award despite losing out the Capers early on, or Kareem Sow’s efforts to help Montreal win bronze.

While not explicitly related to what unfolded in Kamloops, we’d also be remiss if we didn’t mention Ridgebacks attacker Christopher Campoli, who won the U Sports Player of the Year award following an OUA-leading thirteen goals in just eleven matches, good for second on the national scale. Similarly, he topped the OUA assist leaderboard with six, which also saw him come second in Canada.

Campoli had been selected as a first round draft pick by York United in 2021 and the Halifax Wanderers in 2022, and while his professional breakthrough hasn’t come yet, we’re guessing the third time might be the charm for the Ridgebacks history-maker.

With Canadian Premier League scouts having watched the U Sports National Championship, we imagine the ties between the league and U Sports will only grow as we approach the next draft year – especially with Kamloops getting a home tournament win in the same year that a new BC-based club is launching, too.