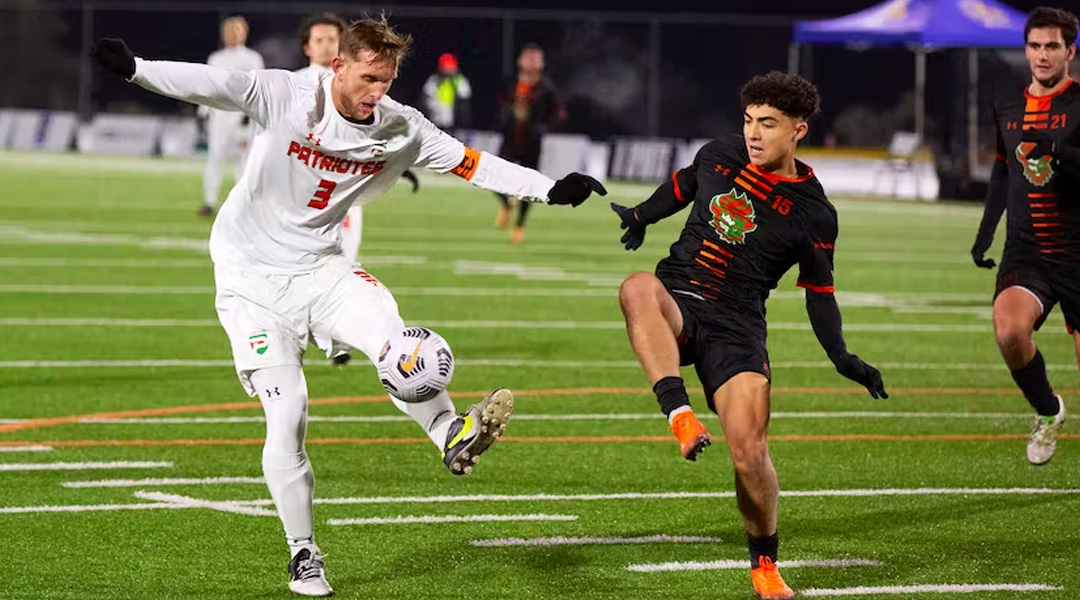 The draft has certainly grown in the scope of eligible athletes over the last few years, and there was plenty more caught our eye. Without further ado, here’s six interesting things we noticed from the draft this year:

This year saw three CPL sides select players from the same university for both of their picks, with Valour, Cavalry, and York United all ‘double-dipping’, so to speak. Even outside of that, Halifax, Forge, and Pacific leaned very local, using both of their selections on players from universities quite close to their stadium grounds.

No side had done the double-dip last year, though Cavalry, FC Edmonton, Pacific, and York all did it two drafts ago. There’s a big sense of deja vu there for the Nine Stripes, who grabbed a duo from Ontario Tech in January 2021 as well. In fact, one of them was – you guessed it – Christopher Campoli.

While Thompson Rivers University both hosted and won the U SPORTS Men’s Soccer Championship this year, Atletico Ottawa first round pick Junior Agyekum was the only Wolfpack member selected in the draft – and there were eleven of them up for grabs, including penalty shootout hero Jackson Gardner.

There was a similarly light selection last year with then-reigning champions Montreal Carabins, as only two of them were drafted following their win. When the UQTR Patriotes won in 2019, only one was named in the following draft, and similarly Montreal’s win in 2018 only translated to a single pick, while runners-up Cape Breton had four.

Whatever the scouting practices, it’s interesting to see that a national championship win doesn’t translate heavily into picks. To be fair, each year’s sixteen selections gets trimmed down significantly when looking at who lands contracts.

League1 Canada Is A Big Part Of The Pathway

Of the sixteen draft selections made yesterday, eleven of them have also developed through clubs that call one of League1 Canada’s semi-profession leagues home (twelve if you count Rushenas training with the North Toronto Nitros for a spell).

League1 Ontario led the way with five player alumni represented, while newly-minted League1 BC had four and PLSQ had two, which was actually good for 100% of the picks from Quebec.

See Also: Five League1 Ontario Players Who Could Make The Jump To CPL

Canada’s intricate network of developmental systems has paid off in dividends for the national team, and we’re seeing quickly that it’s a big part of the pathway for the Canadian Premier League, too.

ProStars Are Being Quite Literal

It’s proving to be a big year for League1 Ontaro side ProStars FC, who helped two of this year’s draft picks pave their way two first round picks. The first is none other than second overall pick Ameer Kinani, who blasted home 17 goals in just 20 appearances for the team, with Vancouver FC head coach Afshin Ghotbi describing the former Iraq U-19 selection as having a natural nose for goals.

Then fifth overall came Christopher Campoli, who switched to ProStars FC from North Mississauga SC midway through the season, capping off his League1 Ontario campaign with three goals in four appearances. With the Ridgebacks, he had incredible return of 13 goals and six assists in just 11 matches, so it was no shock to see him named the U SPORTS men’s soccer player of the year.

Between the drafted duo and York United inking ProStars youngster Markiyan Voytsekhovskyy to a multi-year deal following a campaign that saw the 19-year-old named the League1 Ontario Young Player of the Year, it’s been quite a year for the Brampton-based club.

College Conferences Are On Display

That tracks historically for how the drafts have typically gone, with the two westernmost conferences claiming a lion’s share of the selections. That being said, when you’re looking for a university leading the way in players drafted, it’s hard to look past the AUS with Capers Breton Capers.

It’s nice to see our university talent represented from coast-to-coast.

Edmonton Left In The Cold

It’s now been three drafts since a player has come in from the University of Alberta, with the last selections from them being when Jeff Paulus selected FC Edmonton Academy talents David Chung and Jacob Bosch. That was…about 1,131 days ago.

The Eddies were the only team to draft players from there, bringing four through the inaugural draft (two of whom were Easton Ongaro and Connor James). With the club now terminated, it’ll be interesting to see who will eventually break through with the University of Alberta to secure a CPL move for themselves.

The Best Offence Is A Strong Defence?

Half of this year’s selections went to defenders, with centre-back Anthony White leading the way with the first overall selection.

The first round saw a majority of the picks hail from the defensive third, which is a first for the CPL-U SPORTS Draft. Whether that’s indicative of a domestic talent vacuum at the back that clubs are looking to fill, or whether this is simply indicative of some high-potential youngsters coming through at once, it’ll be interesting to see which ones break through to earn minutes at the professional level next year.

The 2023 CPL-U Sports was certainly an interesting one, especially given that it was the first one with Vancouver FC in the mix. While only time well tell which clubs truly ‘won’ the draft, it’s exciting to see the next generation of talent get their opportunities to impress.