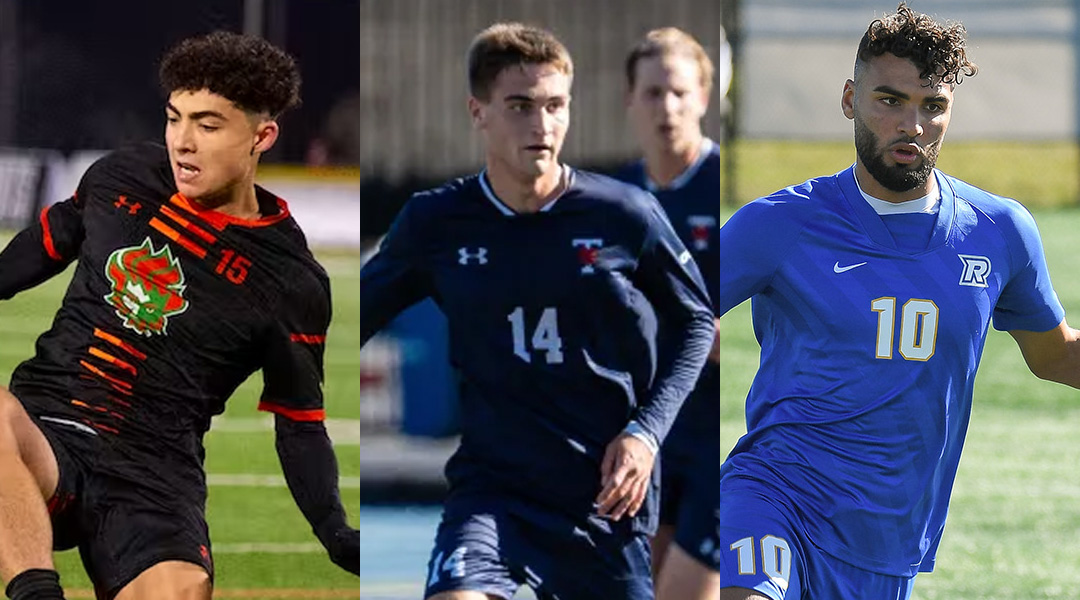 The 2023 CPL-U SPORTS Draft has now concluded, with all eight Canadian Premier Leagues making two picks apiece. Expansion side Vancouver FC claimed the first two first round picks, after which selections were made in reverse order of league standings (with an exception for league champion Forge FC).

This year saw 199 eligible draft prospects (up from 165) eligible for selection. Unlike the MLS SuperDraft, there are no contractual ties with being selected here – instead, it’s an exclusive invitation to training camp.

The inaugural Vancouver FC draft selection – and the first overall of the 2023 CPL-U SPORTS Draft (no pressure!) went to centre-back Anthony White, who has been a strong presence for the Varsity Blues over the last. Pitched by Ilya Orlov as one who might follow in the footsteps of Lukas MacNaughton, it’ll be interesting to see if the youngster grasps his opportunity with VFC.

“It is unique to find left-footed central defenders in the soccer market,” said VFC gaffer Afshin Ghotbi. “Anthony is a talented and intelligent young defender who has lofty goals for his soccer career. I was impressed by his ambition and look forward to getting to know him even better in future.”

Outside of U SPORTS action, White has trained with FC Nurnberg, Dinamo Zagreb, and NK Sibenik, while this year also saw him win the inaugural League1 BC title with the TSS Rovers, so in a way he’s also following in the footsteps of another big-time centre-back in Joel Waterman.

We listed Kinani as one who could make the jump to the CPL after the former Iraq U-19 forward proved himself too be one of the most deadly finishers in League1 Ontario this year, recording 17 goals in just 20 regular season matches with the ProStars. He also netted seven goals in eight appearances for the George Brown Huskies before featuring eleven times for the Bold, contributing four goals in OUA action.

“Ameer is always dangerous in front of goal,” said Ghotbi of his selection. “With and without the ball, he is committed to running behind back lines and creating havoc with his pace. Ameer boasts a natural nose for the goal, and has the instincts needed to be in the right positions in the right moments.”

Having also spent time developing with Spanish side Cartagena FC, his opportunity out west could see him grasp a professional career. That’s something one ProStars alumni has already done this year, with Markiyan Voytsekhovskyy netting a multi-year deal with the Nine Stripes.

Halifax looked close to home in terms of U SPORTS options, bringing in full-back Anthony Stolar. The 19-year-old featured eight times for CBU’s undefeated season, and was a familiar face to Patrice Gheisar after also featuring regularly with League1 Ontario side Scrosoppi FC.

“He checked off all the boxes we were looking for, he’s super competitive, and a player we know can come in and be ready to perform,” Gheisar said of the first round pick.

Stolar hails from Mississauga and could prove a versatile option given that he’s comfortable as both a left-back and right-back.

Campoli has now accrued two first round selections from York United, and has also been drafted by Halifax previously. After a statement season, he might finally get his opportunity to break into the professional ranks if the third time proves the charm.

The 21-year-old had a statement season in U SPORTS action, contributing 13 goals and six assists in 11 matches for the Ridgebacks while also cementing himself as the team’s all-time leading goalscorer. He also made team history as the first Ridgebacks player to capture the U SPORTS men’s soccer player of the year.

One doesn’t get more ‘ready’ for a chance at the big leagues than this.

24-year-old centre-back Pianelli Balisoni was drafted by Forge last year, but now it’s Valour who have laid claim on the third-year UQTR defender. Standing at an imposing six-foot-four, he helped his university to a U SPORTS Championship in 2019.

Born in Bastia, France, Pianelli Balisoni developed with national third division side FC Bastia after going through the SC Basia youth development program. Proving a big presence on Canadian pastures, there are many who think he can make a seamless step into CPL.

19-year-old youngster Eric Lajeunesse just wrapped up his first U SPORTS campaign, where he made a big introduction as a key component of the UBC Thunderbirds defense for whom he started 22 times this season.

“Eric is a left-footed central defender with good size at six-foot-two,” adds Merriman on the Whitecaps Academy product. “He plays with composure, plays simple on the ball and has good potential.”

Cavalry’s first pick of the draft went to local Calgary native William Omoreniye, who offers plenty of versatility as both a full-back and midfielder. While he looked solid at the back, he also contributed an impressive four goals and three assists for the Dinos in 2022, cracking U SPORTS All-Rookie Team following a head-turning introduction to U SPORTS.

His ties with Cavalry run deep, with Omoreniye having suited up for Cavalry U-20 in the AMSL, and having also developed through the Calgary Foothills Academy Program.

Despite Thompson Rivers University winning the U SPORTS Men’s Soccer Championship this year, Agyekum represents the only pick to come from the BC-based national title holders. He was named MVP of the entire tournament, having started 17 of 22 matches for the team. The 20-year old was one part of the Vancouver Whitecaps Academy, and represented Kamloops in League1 BC action through Rivers FC, too.

“Junior is a player with great physicality and brings balance to his teams,” stated Atletico Ottawa boss Carlos Gonzalez. “He’s versatile and his capacities match really well with what we are looking for in a midfielder. We are well aware of the season he has had, an important piece for his coach and an MVP, who shows in every game that he has a competitive and a winning mentality which is what we look for in our squad and to improve our team.”

Miles was one of our top picks for players who could make the jump to CPL this year, and Forge is a logical landing ground: he had a breakthrough year in League1 Ontario with Hamilton Elite United, procuring an astounding return of 23 goals in just 20 games.

The McMaster University product also tallied 18 goals and four assists during his four U SPORTS campaigns, with the six-foot tall youngster proving prolific in all facets of play ahead of his opportunity with the hammers.

Check out this highlight video, Forge fans. You’ll like what you see.

Rushenas wasn’t a surprise pick given his familiarity with the team: the 19-year-old goalkeeper already featured for the Wanderers U-23 squad and has trained with the first team regularly. With Halifax having released both goalkeepers, his second round selection presents a golden opportunity for the AUS second-team all-star to step up to the professional level.

“We had him with our keeper coach Jan-Michael Williams last year, and he has massive upside,” Gheisar said of Rushenas. “He has great feet, which suits our style, has great size and agility and in my conversations with him, I was impressed by Aiden’s attitude.”

Rushenas had trained with League1 Ontario side North Toronto Nitros before enlisting with Dalhousie, where his debut season saw him finish as the league leader in saves and third-highest in save percentage with 0.827.

The Nine Stripes stuck with Ontario Tech University for their second selection, bringing in midfielder Trivine Esprit to pair with his teammate Christopher Campoli. His freshman season saw him feature eleven times for the Ridgebacks, and he saw more action through League1 Ontario expansion side Simcoe County Rovers following his time with Unionville Milliken SC last year.

York United midfielder Jordan Wilson had suggested that the club look closely at Esprit, and the Nine Stripes evidently liked what they saw after combing over footage of his Ridgebacks gameplay.

“He’s got some real bite to his game,” adds York United Club President Angus McNab, “but there’s also plenty of technical ability there too, so we’re excited to see how he does with us.”

Valour boss Philip Dos Santos double-dipped with UQTR, with his second round selection adding left-back Samuel Laplante. He made nine starts for the team this year, collecting two assists along the way.

There’s a lot of defensive shuffling going on at IG Field, and if Laplante plays his cards right he might serve as a good understudy to new Valour signing Jordan Haynes.

Pacific once again looked to solidify its backline with this year’s draft, bringing in left-footed defender Brandon Torresan, who is quite familiar with head coach James Merriman. He started sixteen matches for the Spartans this year, contributing a matchwinning goal against University of Northern British Columbia, and had played in League1 BC with Unity FC.

The North Vancouver native, who had developed with the Whitecaps Academy, is capable of playing both as a centre-back and out left, but has shown a good burst of speed that might surprise spectators, too.

Tommy Wheeldon Jr. stuck with the Dinos for his second round pick, bringing in fourth-year midfielder/defender Eryk Kobza. 2022 saw him transition into a centre-back instead of his usual defensive midfield duties, and it was a big success: he featured in all but possible minutes for the Dinos this year, contributing three goals and three assists. Suffice to say, he’s coming in from a big breakthrough campaign.

“He has a great physical presence about him, with a nice feel for the ball and versatility to play in a couple of key positions,” adds Tommy. “We are looking forward to seeing how he does in our environment in pre-season.”

Kobza also arrives to Spruce Meadows with some club experience in his back pocket, having spent a season with Polish third division side Podlasie Biala Podlaska.

This year’s regular season champions looked close to home for their second round pick, bringing in Carleton University striker Mohamed Bouzidi following a prolific rookie season that saw him contribute seven goals in ten matches. He also impressed coaches through the club’s tie-in Atletico Madrid development program, and had an in through Atletico Ottawa assistant coach Kwesi Loney, who also coaches the Ravens.

At 18, he’s one of the youngest picks in the draft, so it’ll be interesting to see if he can punch upwards in the professional ranks.

The only York Lion to feature in this year’s draft, 22-year-old defender Milo Djuricic is an imposing figure: standing at six-foot-four, he’s accrued 16 appearances for York University over the last two seasons.

The 2022 CPL season saw defensive injuries force Alexander Achinioti-Jonsson forced to adopt a centre-back role, and while that had a fairytale ending, it looks like Bobby Smyrniotis is keen to examine his depth in the position.

The 2023 CPL-U SPORTS Draft has now concluded, with the sixteen selections now set to trial for a U SPORTS developmental contract with their respective sides. Players like Isaiah Johnston, Easton Ongaro, and Joel Waterman have shown how high these picks can progress, so it’ll be interesting to see what comes next for the youngsters listed above.

If you’re still keen to dive into more on the draft, we’d heartily recommend the analysis over at 49 Sports, too.