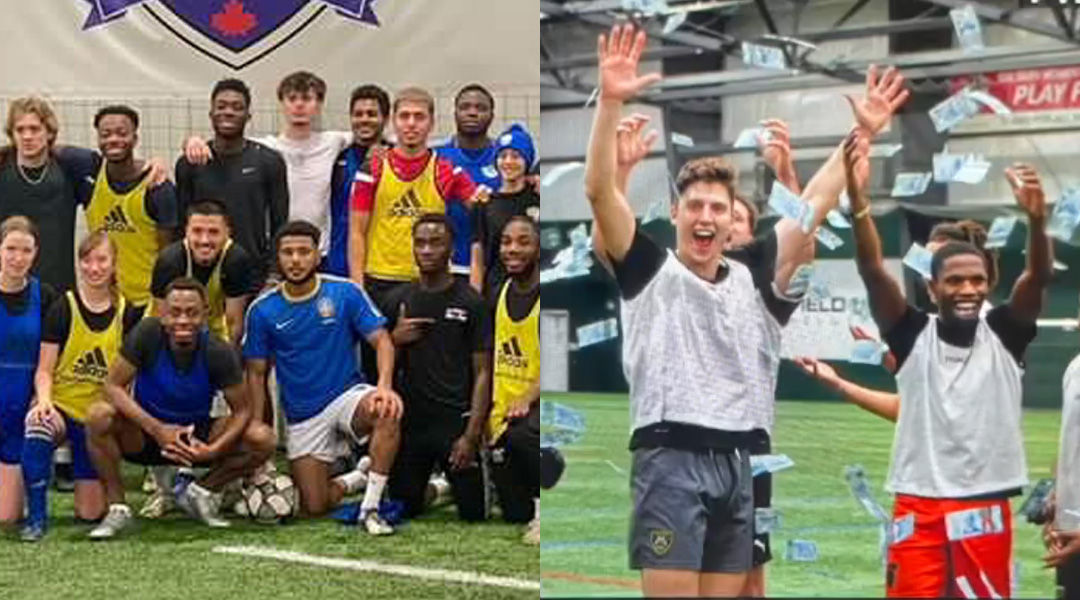 Alphonso Davies was a highlight visitor at the YEG Combine, but plenty of professional talent took part in both showcases.

This month saw both Edmonton and Cavalry showcase local talent at two different events, with Alphonso Davies showing plenty of love at the YEG Combine while Elijah Adekugbe’s pro-am tournament put a spotlight on local athletes over in Calgary.

Both events took shape in very different ways, but both served well to highlight plenty of Albertan talent, many of whom are without contract.

Here’s what went down in both Alberta metro areas:

Alphonso Davies has been known to show plenty of love to hometown Edmonton, with the Bayern Munich star recently taking part in a holiday season YEG Combine alongside several current and former Canadian Premier League players who call Edmonton home. An assortment of local athletes also complimented the festivities.

The event had significant support from the St. Albert Soccer Association, with executive director Christopher Spaidal helping organize a night to showcase local talent in a city that no longer has a professional soccer team of its own.

“It’s for the players who are currently not on contract, but the whole city knows the deserve to be on one. We wanted to let them know it’s okay to just be part of the journey, and you can always kick a soccer ball and enjoy yourself while you do it,” said Abraham Dukuly, who suited up for FC Edmonton in its NASL era.

There was a healthy continent of Edmonton locals who have played in the Canadian Premier League present, including former Eddies athletes Shamit Shome, Joseph Holliday, Prince Amanda, David Doe and Marcus Velado-Tsegaye, who all find themselves out-of-contract.

For Holliday, a 17-year-old who made his professional debut in FC Edmonton’s final home match last year, the combine was a golden opportunity to show the receipts for his hard work in the off-season.

“The combine had a lot of quality and it opened a lot of the kid’s eyes that were watching on what the next level is,” said Holliday. “Taking pictures with them and having little chats, it definitely motivated the young boys and girls present.”

Former Pacific and Cavalry forward Jose Hernandez was also there, with the Edmonton-born athlete having most recently plied his trade in League1 BC with Rivers FC. Also present was Prince Amanda’s older brother Gloire, who was staying sharp before his return to the Austrian Bundesliga.

There were plenty of semi-professional and young amateur talent taking in the event, with the YEG Combine serving to put athletes of all levels under one roof to showcase Edmonton talent.

York United midfielder Elijah Adekugbe is set to depart hometown Calgary this year, but the local lad – a Cavalry familiar throughout the club’s first four years – was still keen to put a spotlight on local talent.

The 26-year-old organized a pro-am tournament that came as an evolution to what Adekugbe calls ‘off-season diaries’, which began last year as a gathering of elite football athletes from the area. Testing the waters with a smaller-scale pro-am tournament recently, this Friday’s tournament grew to include several player-assembled teams, a cash prize which ‘makes it more spicy’, and an all-star matchup between two women’s teams to cap it off.

“We’re all in the same boat – the pros are going into the preseason, and the young guys are getting their first chance to go to preseason. It’s all about sharpening eachother’s tools,” Adekugbe told the Calgary Sun earlier this week.

Coming in from YEG were Eddies talents like Marcus Simmons, T-Boye Fayia, David Doe, and Jose Hernandez, the latter two being fresh off from the YEG Combine. Marko Ilich, a goalkeeper for the Victoria Highlanders who grew up in Calgary, was on Elijah’s team.

“We’ve got the works,” added Adekugbe. “These guys are all pretty good level. We also have some young 16-year-olds who play for Foothills, so they’re kind of like the next in line around here.”

Adekugbe’s squad took home the cash prize following the final, which was preceded by an all-star women’s match featuring the likes of Mya Jones, Sarah Kinzner, Aliya Coy, and Erica Mysko, among others. In-all, it was a great gathering of local talent and an entertaining way for local athletes to test their levels against one another.

It’s nice to see Edmonton and Calgary each hosting some star-studded off-season events, particularly with so many Canadian talents still fighting for contracts as the offseason nears its end.

While what comes next for the bulk of the out-of-contract athletes remains to be seen, it’s great to know that athletes from Alberta are rallying together, especially given that Canada’s soccer offseason is one of the longest in the world.

The 2023 Canadian Premier League schedule has not yet been released, but the season is expected to kick off in April 2023.