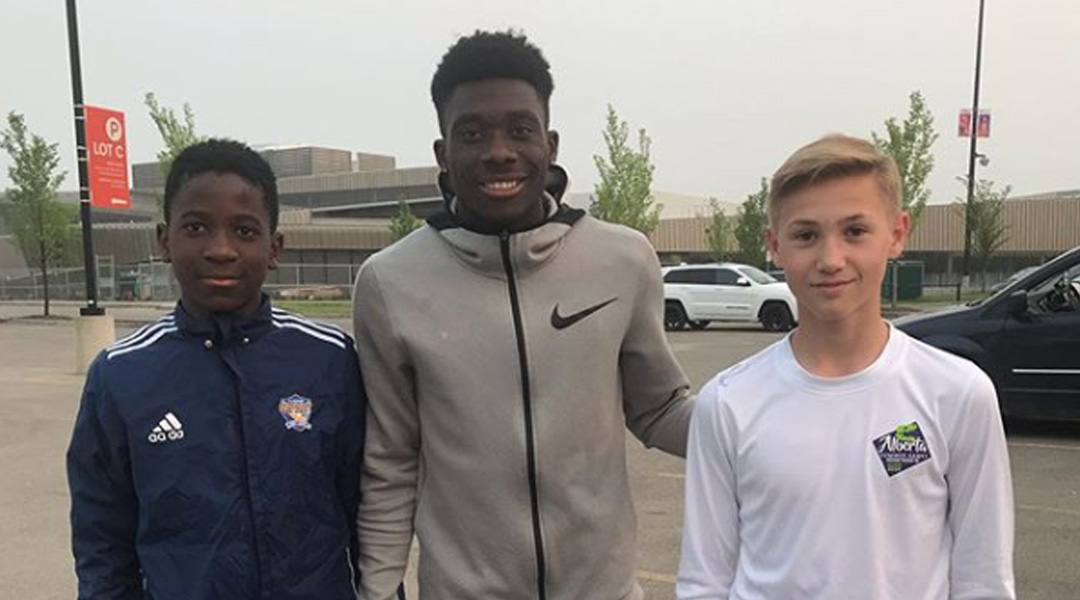 Jeff Paulus’ FC Edmonton side had a high profile visitor today in Alphonso Davies, the 18-year-old Bayern Munich player who began playing for the Bundesliga winners in January. The Vancouver Whitecaps stand to gain some $28.5 million dollars for his transfer, pending performance-related bonuses.

Davies, who has Liberian parents, ended up growing up in Edmonton after being displaced by the Second Liberian Civil War. The family originally moved to a refugee camp in Ghana, where he was born, before travelling to Windsor when he was five. They then moved to Edmonton, where the teenage phenom developed as a teenager. On his second year trialing with the Whitecaps, the MLS side picked him up. He had an explosive season after that, and suitors ranging from Manchester United to Bayern Munich were quick to take notice.

Davies is a symbol of the next generation for the national team. Canada has seen an explosion in young, high-quality attacking talent, with Davies being joined by the likes of Jonathan David and Liam Miller. Later this month, Davies will be representing the country in the Gold Cup. For today, however, he got to relax and take in his hometown side playing a pro-game.

That being said, it wasn’t the greatest game for FC Edmonton. The home side fell to a 0-1 home defeat against Valour FC, with Ali Musse scoring the winner in the 79th minute. It has now been almost a full month without FC Edmonton finding the back of the net.

The game was originally scheduled to take place yesterday, but the match was postponed due to air quality concerns as wildfires in Northern Alberta continue to rage on. As a result, the fixture was moved to this Sunday morning, with The Eddies offering a free pancake breakfast and free access to fans 14-and-under to encourage a modest Sunday morning crowd.

The south grandstand, which was intended to be used for the supporters’ end, was a missing fixture at Clarke Stadium as a result of the delay. Today, it was being used for a rodeo instead.

Davies will be far from the only high-profile visitors to Clarke Stadium by the time the summer hits, with Cardiff City almost certainly due for a visit on July 20, 2019. Having just been relegated from the Premier League, the Bluebirds announced that they’d be playing a preseason match against a club in Edmonton – and that certainly narrows down the options.

Davies’ parents still live in the city, and he’s been quite busy in Alberta since his return from winning the Bundesliga. The 18-year-old Canadian international stopped by the Born To Be Soccer Academy on Friday, visiting young soccer players and even playing against a few of them.

While the home side may have lost, Alphonso’s presence is a nice touch to a good Sunday morning of football. After all, there are a lot of Canadian players who’d love to emulate his success. The existence of the Canadian Premier League will go a long ways into helping the next Alphonso Davies.