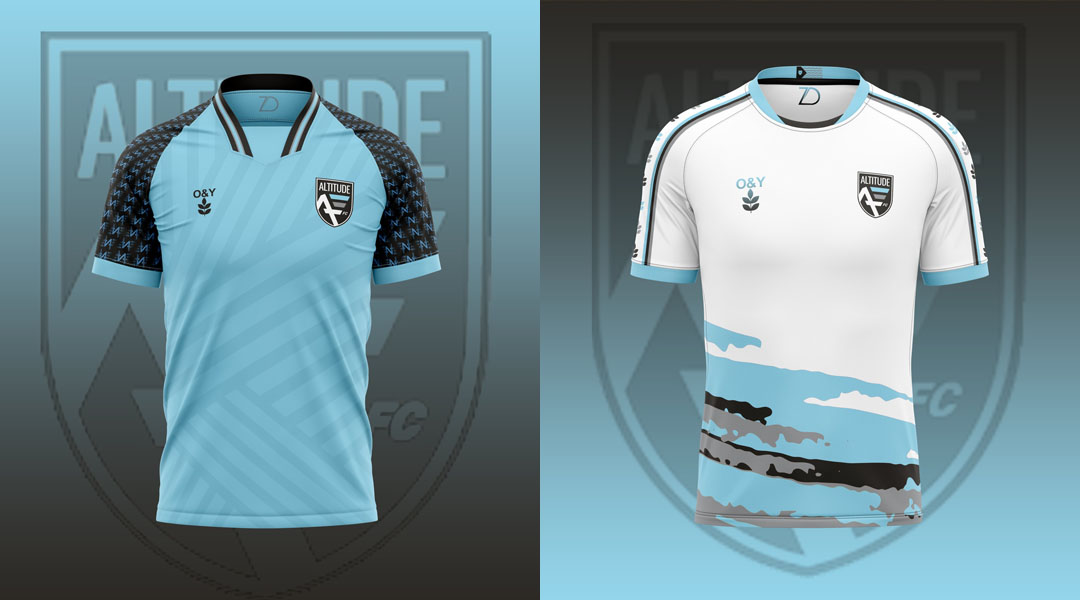 Out of all seven inaugural League1 BC sides that have been announced this year, it’s fair to see that none have looked at slick as Altitude FC: the North Shore-based semi-professional club sports a sharp-looking colour scheme and, thus far, has presented itself in a very polished manner.

While Altitude FC won’t kick its first ball until the inaugural League1 BC season launches in May, the club recently stated that it has nearly finalized its kit and merchandise supplier.

Perhaps that’s why Zephyros Designs took a crack at some conceptual home and away kit designs based on Olive & York, and we have to say that the concept kits would be an absolute highlight out west:

The home design plays off of the club colour of Cypress Blue, with a geometric pattern of the altitude logo fading in on a dark sleeve. In homage to the club’s introductory motto, the back of the collar also features We Are Altitude FC, which is the social media hashtag currently used by the newly-minted side. All-told, it’s a sharp look that kit producer Olive & York stated it’d love to make.

The away kit concept features Seymour White as the primary colour, with Zephyros Designs taking inspirations from the waterways around North Vancouver to decorate the front of the kit with some careful swaths of blue, black, and gray. Inside the collar lies the flag of Vancouver, with a sleeve sporting rotating club-based colour variants of the Olive & York logo.

The club recently ran a poll to determine its first-ever official scarf, with the winning design looking just as sharp as the club itself. With Altitude FC off to a hot start in terms of aesthetic, it’ll be exciting to see what the official kits end up looking like.

Zephyros Designs is no stranger to the Canadian soccer realm, having designed conceptual looks for League1 Ontario sides Simcoe County Rovers and Electric City FC before. The South Africa-based designer has plenty of work on their Instagram page that reaches far beyond the realm of Canadian soccer, too.

Altitude FC will have plenty of updates for fans set to come over the next few months, with the fourth of seven announced League1 BC side working with Faly Basse to build a roster of young, domestic players to help build their pathway to professional soccer.

The club will play from the picturesque Kinsmen Park in North Vancouver, where North Shore United once won both the National and Commonwealth championships in 1938. The club states that it will work with the city to help improve its historic locale, too.

The inaugural League1 BC season is set to kick off in May 2022.