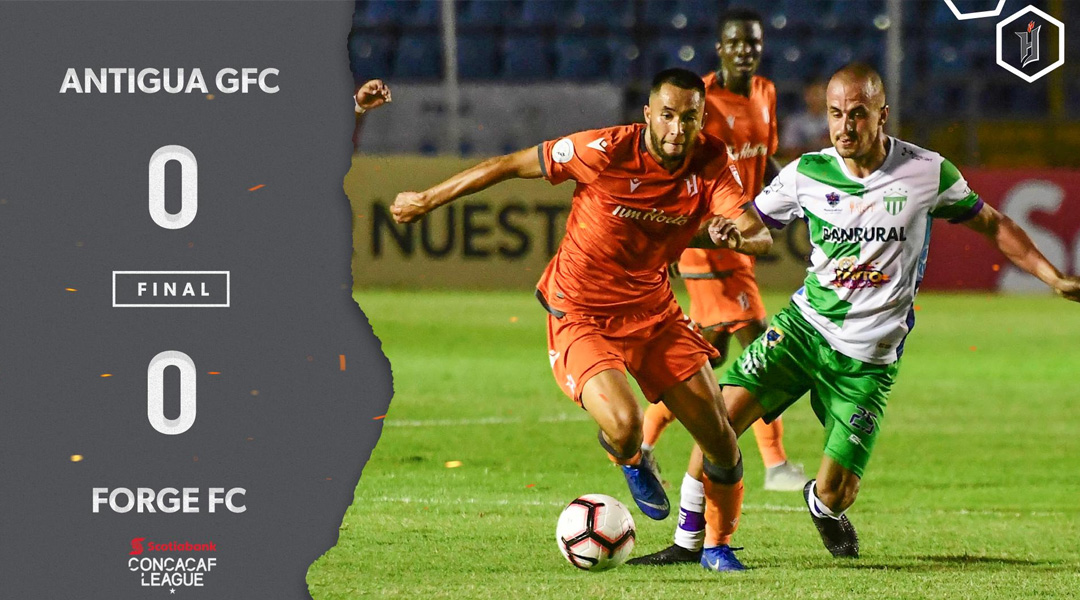 With Forge FC having secured a historic 2-1 home win after its first-ever foray into the CONCACAF League, the club knew it faced a difficult away fixture in Guatemala. Tonight the home side took the lion’s share of the chances, but it was the Hamilton-based club which finished with the aggregate advantage to proceed to the next round.

Here’s a recap of tonight’s nil-nil draw in Guatemala:

After a cagey opening twenty minutes, a great run from Achinioti-Jonsson saw him burst through a pack of Antigua defenders and tip the ball forward to David Choiniere, who had won the home fixture with a last-gasp goal. Choiniere was less fortunate this time around, as the ball was cleared a half-second before the Quebec-born player could finish the chance.


As head coach Bobby Smyrniotis had anticipated, it was Antigua GFC dictating the game’s tempo after that, with chances coming in thick and fast for the Guatemalan hosts. Center-back Jose Mena almost found himself on the end of a speedy freekick, and moments later Forge’s Owundi found himself left behind after a flurry of stepovers as the Guatemalan side probed on the counter. A corner kick after the resulting attack would see Henry barely tip the ball away from Jairo Arreola.

Antigua GFC continued to dominate the first half, with a beautiful through ball to Pablo Mingorance allowing him to outrun Dominic Samuel. The chance was swallowed up by Triston Henry, but the danger loomed: Antigua was hungry for the home goal.

Henry, in an effort to slow down the game, would see himself collect a yellow for time wasting in the 45th minute.


The second half was a much more physical affair. David Choinere would get another great chance after a beautiful pass from Borges, but Antigua GFC goalkeeper Luis Moran was up to the task and made the save. After that, it was all Antigua: Henry was kept busy and faced an absolute rocket from Conejo, and was forced to make a desperate dive to punch the ball inches away from Arce as chances for Antigua GFC continued to mount.

Forge FC fans will be happy to have seen Jace Kotsopoulos make an appearance from the bench, as his goal against Valour FC went a long way in regards to the club qualifying for the CONCACAF League in the first place.

With eight minutes left on the clock, Bobby Smyrniotis made a defensive change and brought on newly-signed Canadian international defender David Edgar in an effort to secure the result away from home.

The atmosphere from the crowd turned sour as the minutes ticked by, and things quickly got worse for the home fans: Pablo Mingorance would get a second yellow for dissent, reducing Antigua GFC to ten men at a time when it needed to press for a goal.

Interestingly, the last three games involving CPL clubs have all featured a red card: Cavalry FC captain Nik Ledgerwood was sent off in the club’s Canadian Championship semi-final defeat, and former Valour FC captain Jordan Murrell kicked a scorer’s table after being sent off on Monday.


Forge FC almost settled the matter in the 90th minute after a counter-attack saw a shot from substitute Giuliano Frano bounce off the inside of the post. Bekker got to the rebound first, set himself up, and blasted an effort towards goal that was blocked by the desperate movement of Pablo Aguilar.

The home side almost got the goal it was searching for in the last seconds of play, with Lezcano striking a half-volley that went a good foot wide of the net. The whistle would blow moments later, securing yet another historic result for Forge FC: it has now qualified for the CONCACAF League Round of 16 where it will face CD Olimpia.

The Hamilton-based club is now undefeated after two matches of continental action, and Canadian Premier League fans will surely be happy with the nil-nil draw: many Canadian and US sides have struggled to secure away results in CONCACAF fixtures, but Forge FC managed to get the job done today.

Forge FC will play the first leg of the Round of 16 against CD Olimpia on Thursday, August 22 at Tim Hortons Field, which means that the club’s fixtures against Halifax Wanderers (August 21) and York9 FC (August 28, a day before the away leg) will need to be moved. A home fixture against Cavalry FC scheduled for three days after the first match against CD Olimpia might also be moved to allow the team to rest before travelling to Honduras.

Whatever happens next, Forge FC has proven itself a force to be reckoned with. If the club manages to put together a good result against CD Olimpia, it has a chance of progressing into the quarter-finals. If the club finishes as one of the top 6 teams in the CONCACAF League, it will qualify for the 2020 CONCACAF Champions League.

Of course, there’s plenty to come before that’s a possibility – though tonight’s result was a great start for the Hamilton-based club.