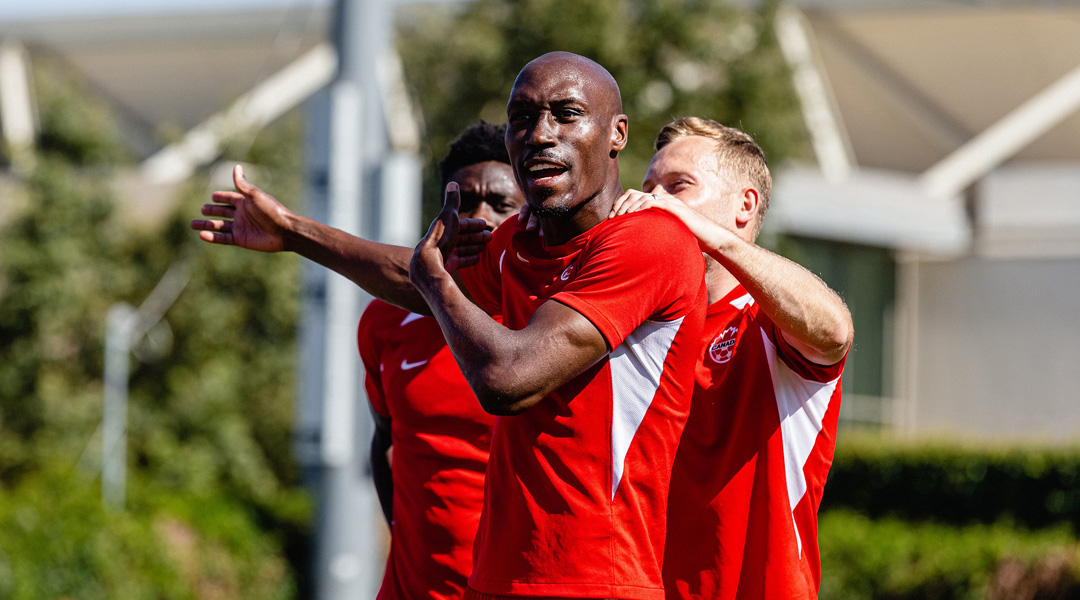 The next generation of Canadian players on the national team have built a lot of hype from fans due to the attacking prowess that the likes of Alphonso Davies, Jonathan David, and Lucas Cavallini bring to the table – but it was one of the more experienced players who led the team into the 2019 Gold Cup.

Atiba Hutchinson has been an ever-present figure in the Canadian national team, having been making appearances for the last 16 years. As one can guess, he’s been present for a lot of heartbreaking moments – the most recent of which came last night in a shock 3-2 defeat to Haiti in the Gold Cup quarter-finals. Late in the game, Hutchinson thought he had scored the equalizer, only to see the linesman raise his flag for offside. The scene brought echoes of the 2007 Gold Cup, where Hutchinson was incorrectly flagged offside after scoring a last-gasp equalizer against the USA.

While the offside call was legitimate this time around, the sting seems no less. Still, Atiba was well-composed after the game, and said that the next generation must use tonight as a learning experience:

We’ve got a young team, a lot of talent. This has to be a learning experience for everybody. Next is to move on from this. Like I said, this is a learning experience. We wanted to go in to this tournament, make some statements, and prove that we’re here to play in CONCACAF. We wanted to win this tournament. We were unfortunate, but I think we know the qualities that we have. There are things we have to get better on. We’ll get back to the drawing board as a team, continue to pick ourselves up, and move on from this.

At 36 years of age, it is widely expected that this will be Hutchinson’s last major tournament with Les Rouges. The Besitkas defensive midfielder had been placed in a firmly defensive role in John Herdman’s squad, even appearing as a centre-back during this year’s tournament. While it’s clear that the attacking talents of the next generation have exploded in growth, its defensive players have not experienced the same level of improvement – though they’re still young and are expected to improve.

It’ll be a tournament that Marcus Godinho will want to forget, having made two key defensive mistakes that allowed Haiti to storm back into the game. Atiba hopes that the younger players will turn this pain into a learning experience, and come back stronger as a result.

Canadian fans, after so many years of watching a CSA that didn’t properly invest in the program, will be hoping for brighter pastures. The signs are there: home games are coming, players are now choosing Canada over other national team options, and the squad is playing an exciting brand of football. The CSA, as it now stands, is putting in massive work to both the men and women’s programs, and helped launch the country’s only professional domestic league earlier this year. This certainly wasn’t something fans would have predicted even a few years ago, so it’s good that Hutchinson – who put so much time into the national team – can see that a more successful future is, at least, on the cards.

The next step for the national side will be the CONCACAF Nations League this fall, where John Herdman will be hoping a home crowd at BMO Field will compel the squad to some positive results as the country faces off against Cuba and USA.