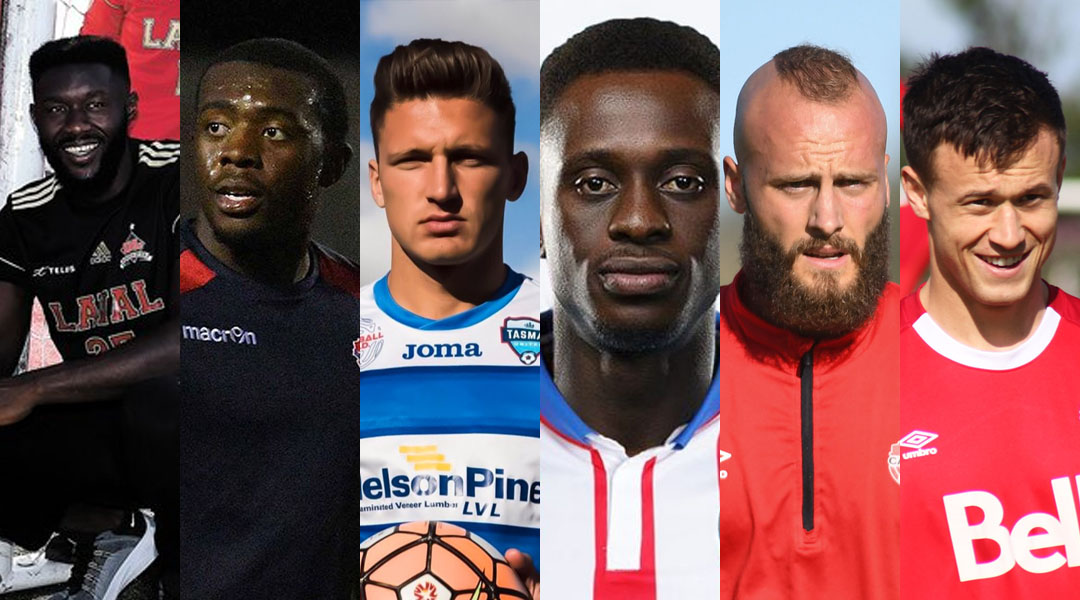 Canadian Premier League expansion side Atletico Ottawa has announced the bulk signing of six different players ahead of The Island Games tournament scheduled to kick off later this week.

As we previously reported, these signings include League1 Ontario standouts Maksym Kowal and Jarred Phillips, along with former Halifax Wanderers midfielder Mohamed Kourouma. Today’s announcement also includes midfielder Ben McKendry, defender Milovan Kapor, and goalkeeper Horace Sobze Zemo. With all six additions, the club has managed to fill its maximum roster size of 23 men in all.

Without further ado, let’s go through the new signings:

The 30-year-old midfielder played almost every possible game for the Halifax Wanderers last year, frequenting the left wing but sometimes being deployed on the right flank too – an area in which head coach Mista identified the need to reinforce. While Kourouma was criticized for his poor shot selection last year, he still managed to contribute four goals and four assists for the Wanderers last season, which could make him a potential wildcard for this campaign. Kourouma will be wearing the number nine this year, which certainly comes with the expectation of goals.

As a youngster, Kourouma had left Canada to start his football career overseas with Red Star 93, a place that was briefly the home of former Santos FC youth product Junior Kingue, who had trialed with York9 FC and Forge FC in the inaugural season. He then spent a year with the Gent reserves in Belgium before jumping to Guinean side AS Kaloum Star. He would later have a solid season with the Wanderers, but found himself cut after the inaugugral campaign regardless. At The Island Games, Kourouma now has a shot at redemption dressed in Atletico’s iconic red-and-white look.

We had reported earlier that the 2019 League1 Ontario Golden Boot winner was likely to sign for the side, and now he’ll officially be challenging Malcolm Shaw for a spot up top. After scoring some fourteen goals in just as many appearances for the Vaughan Azzurri last season, he’ll be hoping his fine form will carry through to The Island Games after a prolonged offseason.


The 29-year-old has had a journeyman career that has taken him from the lower leagues of England (Barnstaple Town, Tiverton Town, Carlton Town), Poland (Widzew Lodz, Rakow Czestochowa, LKS Lodz), New Zealand (Tasman United, Canterbury United), and Canada (Toronto Lynx, Vaughan Azzurri, FC Ukraine United). If he can play well in PEI, he may be able to secure a spot for himself in Ottawa for the long term.

A consistent full-back at the League1 Ontario level, last year saw the 25-year-old play every possible minute in Vaughan’s Canadian Championship matches against the Halifax Wanderers, with the defender impressing against professional competition. The three-time League1 Ontario all-star has won the league twice with the Vaughan Azzurri, featuring 62 times for the side since 2016 while looking comfortable on either wing. He’ll provide good competition for the likes of Vashon Neufville, Kunle Dada-Luke, and Michel Djaozandry.

Former Vancouver Whitecaps player Ben McKendry is a familiar sight for fans of the local game: the 27-year-old midfielder developed through the Whitecaps Academy, played for their USL team, made one senior appearance for the MLS side, and was also loaned to FC Edmonton in 2017. He made a sole appearance for the men’s national team that year, too.

McKendry arrives to Atletico Ottawa by way of Swedish third division side Nykopings BIS. The centre midfielder will provide Mista with more options in midfield as he seeks to deploy careful, calculated counter-attacks that slow the match down.

The 29-year-old Canadian centre-back joins Atletico Ottawa from Uzbekistan to provide some much-needed defensive depth. The Toronto-born defender has spent his professional career in the USA, Spain, Slovakia, Belarus, Israel, and Uzbekistan, so his name may not be very familiar to Canadian supporters – though he was named to the provisional 40-man roster for the Canadian Gold Cup squad in 2017.


While Kapor can also be pushed up as a defensive midfielder, Atletico Ottawa fans can likely expect him to compete for a spot directly at centre-back alongside Brandon John and Vancouver Whitecaps loanee Gianfrancho Facchineri.

The PLSQ all-star goalkeeper appears to be Atletico Ottawa’s third string choice, with the Cameroon-born shotstopper slotting in behind goalkeepers Ricky Gomes and Nacho Zabal. Having won the PLSQ with FC Gatineau, played for League1 Ontario side Ottawa South Force United, and trialed overseas in Switzerland, the 27-year-old was in the midst of pursing a degree at Lavalle University last year. Now, he’ll be hoping for an opportunity to prove his worth at the professional level.

We are excited to announce the addition of all six of these players, as we now have a full roster for The Island Games, which we believe will provide us with much needed depth in such a competitive environment.

All-told, the additions provide some vital depth for head coach Mista, who now finds himself with somewhat of a selection headache in midfield. The club also recently brought in Whitecaps Residency product Matteo de Brienne, with Ben Fisk expected to captain the side for its inaugural campaign.

The 2020 Canadian Premier League season will kick off on August 13, though the full league schedule has yet to be revealed. With Atletico Ottawa put dead last on the power rankings by OneSoccer pundit Gareth Wheeler – prior to these signings – it’ll be interesting to see if Ottawa-based club can prove the doubters wrong.